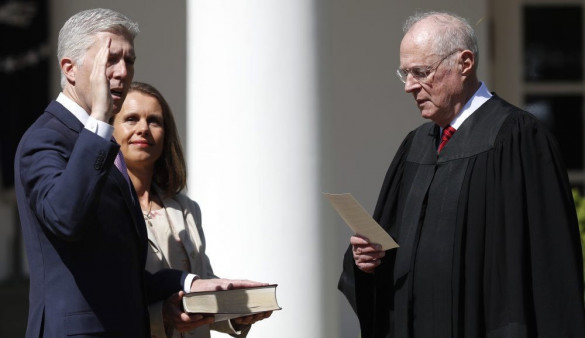 Supreme Court Can Become an Instrument of Repression and Inequality

But AIDS activists can help stop that transformation as we fight for human rights and social and economic justice.

For a brief moment, it seemed as if the Supreme Court had finally shifted into a space where the majority of the nine sitting justices would rule in favor of the oppressed and not their oppressors. In their decisions around the constitutionality of the Affordable Care Act and same-sex marriage, the Supreme Court as a whole came to the defense of the sick’s right to be well and for love’s right to bind together any couple it so chooses, regardless of the gender or sexual orientation of those involved.

This Tuesday—a day that marked the three-year anniversary of the Obergefell vs. Hodges decision that made same-sex marriage the law of the land—those progressive victories for access to health care and marriage equality seemed eons away as the Supreme Court voted to uphold the Trump Administration’s unjust and discriminatory Muslim travel ban and to protect the ability of “crisis pregnancy centers” to deliberately mislead pregnant women who deserve comprehensive medical care. It was an awful day, to be sure, but nothing in it could have prepared us for what was to happen next. The cruelty contained within the discriminatory opinions given by Justice Kennedy on Tuesday paled in comparison to the profound harm portended by his retirement on Wednesday.

While certainly a conservative judge in many respects, Justice Kennedy’s time on the Supreme Court has been notable in large part for the role he played in upholding reproductive rights and supporting equality for the LGBTQ community. Through his decisions in Casey vs. Planned Parenthood and Obergefell, Kennedy ruled along with the court’s four more liberal justices in upholding a woman’s right to an abortion in Roe vs. Wade and the right to marriage equality for same-sex couples.

Now that he has chosen to retire, effective July 31st of this year, there is little doubt that the rulings in those cases and many other which have imbued people living with and affected by HIV with equality before the law and access to health care will be challenged and possibly overturned. Given the high concentration of deeply conservative, anti-abortion, anti-Affordable Care Act judges who have been named to President Trump’s short-list of potential Supreme Court Justices, it is safe to say that any Trump appointee would drive the ideological bent of the court even further to the right, endangering many of the judicial precedents that protect some of our most sacred and vital rights.

As AIDS United’s former Vice President of Policy and Advocacy Ronald Johnson wrote back in February of 2016 when Senate Majority Leader Mitch McConnell was first beginning his ultimately successful gambit to steal a Supreme Court seat from President Obama’s nominee Merrick Garland, the fight against HIV/AIDS has always been, at it’s core, a fight about human rights and social and economic justice. The appointment of Neil Gorsuch in Garland’s stead last year was a significant blow to the fight for social and economic justice, but it did not significantly alter the ideological makeup of the Court. If President Trump is permitted to appoint yet another hyper-conservative justice to the Supreme Court—his second in less than two years—a new, deeply conservative majority would form that would negatively impact people living with and affected by HIV decades to come.

In a recent statement on the floor of the Senate, Minority Leader Chuck Schumer (D-NY) called Senate Majority Leader Mitch McConnell’s decision to press forward with the nomination of a replacement for Justice Kennedy in an election after his efforts to thwart Garland’s nomination in 2016 as the “height of hypocrisy.” However, due to the Republicans slim 51-49 majority in the Senate, there does not appear to be a clear route for Senate Democrats to stop the GOP from moving forward and, for centrist Democratic Senators from red states like Joe Manchin of West Virginia and Heidi Heitkamp of North Dakota, there will be pressure to break ranks with the party and support a Trump Supreme Court nominee in exchange for support at the polls in November.

At the moment, things may look bleak. But, it is worth remembering that 18 months ago, it looked for all the world that Donald Trump was going to storm into the Oval Office and, with the help of a Republican majority Congress, repeal the ACA straight away. As we know, the efforts to repeal and replace the ACA failed and the reason they failed does not lie with any Senator or Representative, but with the fervent protest and unceasing action of HIV advocates and our allies from a tremendous constellation of other advocacy communities across the country. If we could stop the repeal of the ACA with our voice and our will, then there is no reason that we cannot stop the transformation of the Supreme Court into an instrument of repression and inequality.

AIDS United will do everything we can to vigorously oppose any nominee for the Supreme Court whose record so much as suggests an opposition to the Affordable Care Act, LGBTQ equality, and a woman’s right to choose. The future welfare of all people living with or affected by HIV and the possibility of seeing an end to the AIDS epidemic in our lifetimes depends on it.