The Quilt in Prison

This coming July, when I stand in Washington, DC, in the presence of the enormous monument that is the AIDS Memorial Quilt, I will be looking for one panel in particular. That will be the panel I worked on while incarcerated in a high security federal prison for women in north Florida.

It was 1993--three years before the advent of effective HIV combo therapy--and our AIDS education and support group wanted to make a panel, using our grief and rage to fuel our very uneven artistic and sewing skills. We had lost so many family and friends, both inside the walls and beyond. For the sister prisoners we had lost--women whom we had held and tried to comfort as they suffered not only painful deaths but also the loneliness of rejection by family and the hatred of prison officials--we wanted their names to be remembered, their lives recognized. And who besides prisoners would stitch into collective memory the names of our incarcerated sisters--already nameless and faceless to the larger society? We also wanted to honor the family and friends outside prison who had died, as we had not been able to do with our presence during their passing. We wept as we listed the names, sometimes admitting for the first time aloud that a relative had been hit by this seemingly relentless plague.

So we embarked on a long, difficult process of negotiating with prison authorities to get permission to obtain mail-order sewing supplies--and to use them (think: scissors!). We recruited other women in the prison to join and work with us. We talked about our lost ones and how our AIDS work helped to heal us. We talked about how we could reach through the bars to the AIDS activist community outside, even though we couldn’t reach to touch the people we loved as they sickened and died in our communities at home.

Most powerfully, we were able to paint onto our panel the names of the women who had died behind bars at a time when most people didn’t know or wouldn’t admit that women were contracting and dying from HIV/AIDS. It was still a time when activists on the outside wore T-shirts emblazoned with the slogan, “Say it: Women Get AIDS,” because otherwise most people did not know.

Here is what we created, with us posing in front of it: 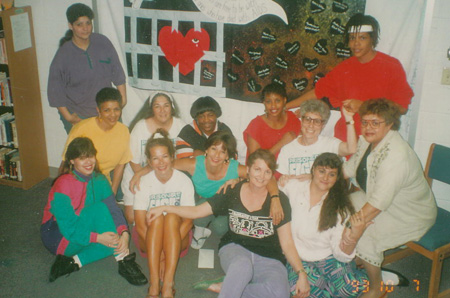 Here’s a closeup of the panel: 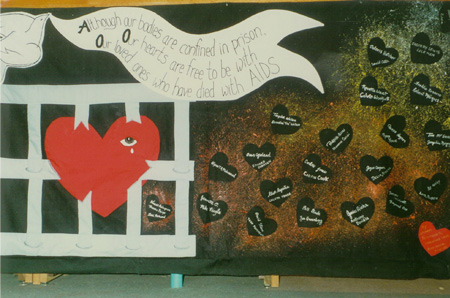 What is most remarkable about the panel, I think, is that it is far from the only one produced in a prison. I remember vividly how grateful I was to learn that women in another prison had made a panel, and that they had added the name of my dear friend who had recently died, and whom I was mourning. I saw her name when I received a photo of that panel: “Pam/Amirah.” When we made our panel, Amirah was still alive.

When you view the Quilt in DC this summer, as I hope you will, please look for the panels made inside prison walls. And please know that many members of the HIV/AIDS community, both positive and negative, remain among the more than 2.4 million women and men now incarcerated in these United States. They are fighting alongside us as we march, shout and tweet to end stigma, to cure HIV/AIDS and to stop adding names to our memorials. 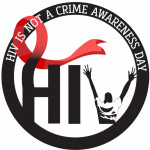