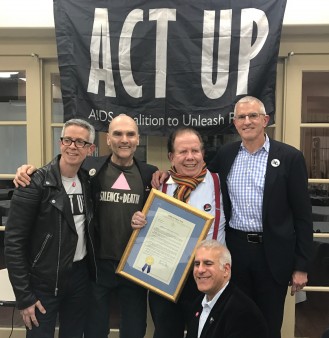 ACT UP honors its own on its 30th anniversary

Friday, March 24, marks the 30th anniversary of the first action held by the AIDS Coalition to Unleash Power (ACT UP). In 1987, more than 250 ACT UP members gathered in front of Trinity Church (located in New York’s Financial District) to protest exorbitant drug prices, unethical research practices and government inaction.

Last night, the group held an anniversary benefit at Housing Works’ Keith D. Cylar Community Health Center to celebrate and honor the work and retirement of longtime ACT UP member Jim Eigo, who was one of the founders of the Treatment and Data committee, which brought about fundamental changes in AIDS drug research and regulation. Guests of honor at the event included Gerri Wells, Eric Sawyer and Andy Velez—three of ACT UP’s original members who answered the initial call to action and who have been inspiring other activists ever since.

In his speech, Eigo chose not to simply share anecdotes from ACT UP’s past—despite saying, “I have a really good memory, and ACT UP has a lot of stories.” Instead, he chose to focus on the truth in the moment:

A representative from Senator Brad Hoylman’s office also attended the event and announced that on March 21, the New York Senate adopted Legislative Resolution J1076, commemorating the 30th anniversary of ACT UP and commending its leadership in the fight to end the HIV/AIDS epidemic. The resolution, sponsored by Senator Hoylman, reads in part:

WHEREAS, Through its work over the last 30 years, ACT-UP has saved untold lives, prevented immense suffering and directly contributed to the building of a better, healthier and more just United States of America; now, therefore, be it

RESOLVED, That this Legislative Body pause in its deliberations to commemorate the 30th Anniversary of ACT-UP, and to commend its leadership in the fight to end the HIV/AIDS epidemic; and be it further

RESOLVED, That a copy of this Resolution, suitably engrossed, be transmitted to ACT-UP.

Click here to read the resolution in its entirety.

On Thursday, March 30, ACT UP will hold a 30th Anniversary March and Rally from 4 p.m. to 7 p.m. The group will meet at the New York City AIDS Memorial in the West Village and march to Union Square. For more details, click here.

The evening concluded with members putting a new spin on their old chant:

ACT UP is presented with Legislative Resolution J1076, which recognizes its leadership in the fight to end the HIV/AIDS epidemicJennifer Morton