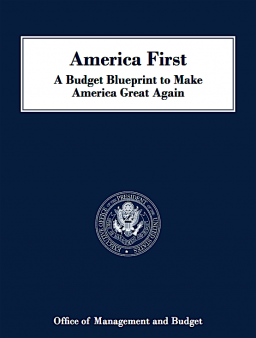 Say what? The budget saves HIV programs while slashing funds to health and human services.

The first step toward funding the federal government is for the president to submit a detailed budget request to Congress for the next fiscal year. This week, President Trump released his first formal budget proposal in efforts to “redefine the proper role” of the federal government. The 53-page proposal is dubbed the “America First” budget and proposes a $54 billion increase in defense spending, reserves $1.5 billion for building a wall on the U.S. southern border, and reallocates $2.6 billion for the border project in the following fiscal year. Trump comments, “A budget that puts America first must make the safety of our people its number one priority—because without safety, there can be no prosperity.” However, to offset these ambitious costs, cuts to non-defense spending were proposed, including sharp cuts to federal education, environmental protection, foreign aid, and health and human services programs.

More specifically, Trump is asking Congress to cut more than 31 percent ($2.6 billion) from the Environmental Protection Agency and 28 percent ($10.9 billion) from the State Department. Furthermore, while Trump has made statements that he wants to eliminate all disease, the federal budget chops also include an 18 percent cut to the Department of Health and Human Services and approximately 20 percent ($5.8 billion) in cuts from the National Institutes of Health. A number of federal programs would be cut based on this proposal including the Low Income Home Energy Assistance Program (LIHEAP), a program that helps keep families safe by supporting them with energy costs. To access the full proposal, click here.

Despite cuts from the aforementioned departments, the budget proposal alleges commitment to the Ryan White HIV/AIDS program as a high priority. Ryan White programs is the third-largest source of federal funding for domestic HIV care following Medicaid and Medicare. The budget also alleges to provide “sufficient resources to maintain current commitments and all current patient levels on HIV/AIDS treatment under the President’s Emergency Plan for AIDS Relief [PEFPAR].”

If the President is committed to ending all disease and prioritizing programs like Ryan White, this cannot be done without quality health care. Measures such as the Affordable Care Act and Medicaid expansions have reduced the rate of the people living with HIV without insurance. Jeffrey Crowley, program director of the National HIV/AIDS Initiative at Georgetown, notes, “Dramatic changes to the ACA and cuts to other programs would be devastating even if our important investments in the Ryan White Program are maintained.” Prioritizing the Ryan White Program and protecting PEPFAR commitments are good; however, it is not sustainable to simultaneously propose drastic cuts to programs at HHS, the State Department, and USAID.

The next step is for the House and Senate budget committees to propose their budget resolutions that set targets for spending and tax revenue, with the full administration budget for FY 2018 to be released in May.

AIDS United released a joint statement with national organizations calling for Congress to reject the budget blueprint’s top-line numbers and to provide adequate funding for HIV programs serving people living with or affected by HIV. We are committed to working alongside NASTAD, the National Coalition of STD Directors (NCSD), NMAC, and The AIDS Institute (TAI) to protect the gains being made toward ending the HIV epidemic, and the broad funding cuts to non-defense domestic programs that Trump is proposing run counter to that goal. We will send this message to Congress and the administration between now and the release of the president’s more detailed budget request.