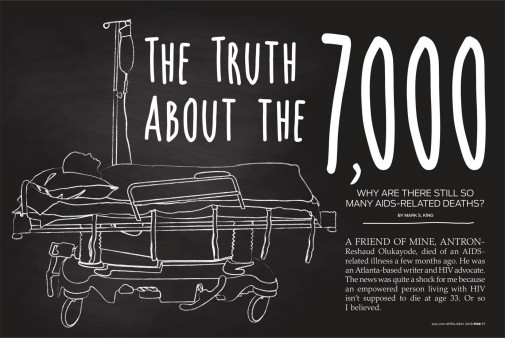 The Truth About Mark S. King

The blogger, author and activist wins the 2019 NLGJA Excellence in Opinion/Editorial Writing Award for “The Truth About the 7,000.”

Mark S. King is many things — a blogger, an author and an activist, for starters — and has won awards for his contributions. His latest award is from NLGJA: The Association of LGBTQ Journalists. Mark won its 2019 excellence in opinion writing award for his 2018 POZ essay titled “The Truth About the 7,000.”

The essay asks a simple question: Why are there still so many AIDS-related deaths? In the United States, nearly 7,000 people are lost to the virus every year. The unexpected death of a friend — Antron Reshaud Olukayode — in 2017 sparked his quest to find out the answer. So he blogged about it.

The response to that blog post was mixed, to say the least. Many folks were supportive about his exploring why Antron was lost to the virus. Many other folks were bothered by Mark discussing the circumstances of Antron’s death. Hence the blog post title, “Antron Reshaud Olukayode Died of AIDS. We Must Say It.”

In the wake of that blog post, Mark pitched me the idea for his now award-winning essay. And as anyone who knows Mark will confirm, he was eager to discuss his idea instead of putting it down in an email. Mark needs to talk things through. And now that he is a POZ contributing writer, we chat often.

“The Truth About the 7,000” picks up where Mark left off on that blog post. The essay starts with Antron, of course, but does a wonderful job of broadening the conversation.

Antron became one of the nearly 7,000 HIV-positive people who die of causes directly attributable to the virus every year in the United States. It’s a stunning number to reconcile in this day and age, and its effects multiply many times over when you include the grieving families and confused friends and frustrated clinicians. Each one of those 7,000 people represents a life that wasn’t supposed to end, at least not to incredulous onlookers who don’t understand how or why anyone with HIV could die anymore.

It’s a fair question, the why of it. Why would anyone never get an HIV test, ignore symptoms, stop their medications or hide their illness? Who exactly are these 7,000 people? What the hell happened?

In search of answers, I talked to workers on the front lines, in clinics and hospitals and community agencies. I talked to patients and activists and people in waiting rooms. Most of them were eager to share what they have seen. Very few wanted to be identified. The truth can be uncomfortable.

What I discovered is that when you ask why, there are so many, so terribly many, answers to the question.

Suffice it to say that the essay struck a nerve with readers — and now with NLGJA judges. In addition to his chattiness, Mark is excellent at striking nerves, in the best way possible.

Congratulations to my friend Mark!

To read more from Mark on POZ, please go to his POZ blog and his author page. Please also visit his blog site, My Fabulous Disease.

P.S. Full disclosure, I’m a lifetime member of NLGJA and was a judge for this year’s awards, but not for the opinion category. It’s always a thrill when NLGJA recognizes work published in POZ, but such recognition is never a given!