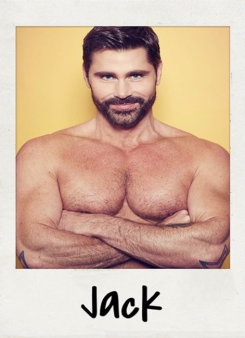 An Interview With Jack Mackenroth

STUART: How long have you been HIV-positive?

STUART: What’s your advice to those who have been recently diagnosed with HIV?

JACK: Try not to freak out. Educate yourselves. Be your own advocates. Talk to long term survivors like myself. And take your meds asap. Most likely you’ll be totally fine. And fuck stigma. Don’t blame yourself. Shame is wasted energy.

STUART: What do you think is the biggest misconception about living with HIV/AIDS?

JACK: That we are sick. Or that we should “look sick.” I mean technically we do have a disease but who doesn’t have some sort of health issue? I live my life like I would if I were negative (except I’d be on Pre-exposure prophylaxis (PrEP) rather than antiretroviral medication). I train hard at the gym. I swim in national competitions (and win). Most of us are not immune compromised. This is of course not true of people who don’t know their status or can’t get access to medication. I know I am lucky.

STUART: Has your status affected your romantic relationships?

JACK: Not at all. I mean I’m quite sure in the 90s I was rejected for disclosing my status but people reject you for a myriad of reasons. It didn’t really phase me too much. In the beginning I preferred to date positive guys because I didn’t want to give HIV to anyone else. I approached my first long-term partner, Greg Beutler, in a club in Miami in 1993 because he had KS (Kaposi’s sarcoma) on his arm so I knew he was positive. I also knew in my heart that I was not contagious long before it became scientific fact. I had three HIV-negative boyfriends who were still negative after we broke up and we never used condoms. I come from a medical family and I was pre-med at UC Berkeley for 2 years and it just didn’t make logical sense that if tests couldn’t find the virus in my blood, then how was I transmitting it?

“A photo of a photo of me and my late bf Greg Beutler. He was fucking stunning. He died in 1996, at age 33, 4 days before the Atlanta Olympics. I told my mom I was positive then and she planned my funeral with my aunt Susie. This is not meant to be a buzz kill but a story of survival, remembrance and triumph. Greg was one of the kindest people I ever met. I introduced myself to him on a dance floor in Miami because he had KS on his arm and I only dated other positive guys. He died abruptly about 2 or 3 years later. I still miss him. Fuck you AIDS.” - by Jack Mackenroth @jackmackenroth . #whatisrememberedlives #theaidsmemorial #aidsmemorial #neverforget #endaids #lgbthistory ???? ᴛʜᴇᴀɪᴅsᴍᴇᴍᴏʀɪᴀʟ@ʏᴀʜᴏᴏ.ᴄᴏᴍ

STUART: What do you think needs to happen to reduce the stigma around HIV/AIDS?

JACK: Well I actually think it’s improved drastically in major cities where PrEP has been widely adopted because negative guys are really getting educated and realising we are not much different from one another. Familiarity breeds acceptance. I also encourage positive guys to be open and unashamed about their status. It’s like gay rights. Society only began accepting us when they realised that we are everywhere. But know it’s difficult for many HIV-positive people to do but I consider it community service. I don’t mean to shame positive folks out of the closet but I think they are doing themselves a disservice by hiding.

STUART: Why should people know their status?

JACK: Because we have ALL the tools to end HIV transmission. The people transmitting HIV are people who don’t know their status and think they are negative while their viral load rages. Or people who lie unfortunately. If you know your status -- especially early on -- the treatments are great now. It’s my personal opinion that everyone in the key populations (men who have sex with men, sex workers, transgender folks and IV drug users) should be tested regularly and if they are positive they should get on meds immediately and if they are negative they should be on PrEP. Please be aware that I know many of these answers are much easier said than done. I’m well aware of my place of privilege and that in many states and countries PrEP is not available and people can be fired and imprisoned for their HIV status. That is royally fucked up. Governments need to get their shit together.

STUART: How can others show their support of those living with HIV/AIDS?

JACK: Others? We are all affected by HIV/AIDS. We should all be showing support by getting tested, speaking out, raising money, protesting, doing the hard stuff.

JACK: ANYONE can contact me on social media @jackmackenroth and ask me as many questions as they want. At any given time I’m usually coaching a handful of people all over the world. I use every medium. Surprisingly Scruff and Instagram are great forums for educating. There are tons of resources for getting medications to people whose governments are not supportive. And there are also great websites such as prepsters.info and preventionaccess.org. And I would like to reiterate that undetectable Poz peeps CAN NOT transmit HIV. Ironically we are the safest sexual partners because statistically we get tested the most for other STIs as well.