Hot on the Trail

AIDS activists are experts at bird-dogging, following political candidates and peppering them with questions about their positions on HIV/AIDS. In the upcoming presidential election—where one candidate threatens to eviscerate federal support for health care and the other advocates protecting it—activists wonder: Should we release the hounds? 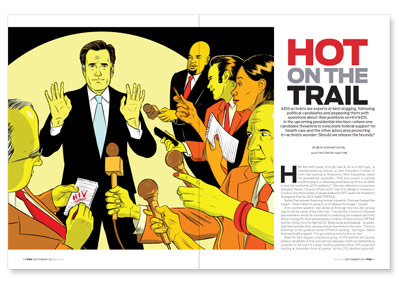 Her brown hair pulled back in a ponytail, a twentysomething woman at Mitt Romney’s October 10 town hall meeting in Hopkinton, New Hampshire, asked the presidential candidate, “Will you commit to putting 6 million people on lifesaving medication by 2013 in an effort to end the worldwide AIDS epidemic?” She was referring to incumbent president Barack Obama’s World AIDS Day 2011 pledge to increase to 6 million the total number of people treated for HIV under the President’s Emergency Plan for AIDS Relief (PEPFAR).

Rather than answer the young woman’s question, Romney changed the subject. “Here’s what I’m going to do to balance the budget,” he said.

Soon another question was lobbed at Romney, this time by a young man in the far corner of the town hall. “I would like to know if a Romney administration would be committed to continuing the tradition laid forth by the [George W.] Bush administration in terms of [how to] fund PEPFAR and the Global Fund [to Fight AIDS, Tuberculosis and Malaria],” he asked. And then another, from a young woman elsewhere in the room: “This is a follow-up on the questions about HIV/AIDS funding,” she began, before Romney finally snapped, “I’ve got nothing more for you on that.”

Meet the bird-doggers, a tenacious group of HIV activists who pursue political candidates at local and national campaign events as relentlessly as a pointer on the scent of a quail, hurling questions about HIV policy and funding at contenders from all parties. As the 2012 elections approach, bird-doggers are just one part of a widespread political mobilization led by the HIV/AIDS community. Races with important implications for HIV-positive people range from those for city councils and state legislatures all the way up to the contest for the White House. With that in mind, advocates, activists and policy wonks are designing voter registration drives, scaling up lobbying efforts and planning direct actions.

“The stakes are very high,” says Ronald Johnson, vice president of policy and advocacy for AIDS United. With trillions of dollars in cuts to the HIV safety net being used as a pawn in the fallout from last year’s debt ceiling debacle and with the full impact of the Affordable Care Act still unknown, Johnson says, “this is not an election to be on the sidelines.” Indeed, with 28 million positive people going untreated for HIV worldwide—750,000 of them in the United States—the outcome of the 2012 race will have lasting and potentially dire repercussions.

Advocates wistfully recall a time when funding for AIDS was a bipartisan issue. In 1990, the Ryan White CARE Act passed the Senate almost unanimously, 95 to 4, and one of its most vocal proponents was Senator Orrin Hatch, a conservative Republican from Utah. PEPFAR itself—the single largest financial commitment in history by any country to combat a disease—was established in 2003 by then-President George W. Bush, with congressional support from both major parties.

No longer. Now the two parties’ stances on issues affecting people with HIV are diametrically opposed. Take the Affordable Care Act (ACA, or “Obamacare,” as the GOP disparagingly calls it), a “game changer in making progress against the domestic epidemic and absolutely critical,” says Chris Collins of amfAR, The Foundation for AIDS Research. Democrats, led by the Obama administration, passed this legislation two years ago. Republicans, on the other hand, opposed the bill en masse in the House and Senate (not a single Republican in either chamber voted for it), and at press time, they had voted for the 33rd time to repeal it. Romney has pledged that repealing the ACA would be one of his first priorities as president.

More broadly, the two parties’ differing financial philosophies have deep implications for the HIV community. As a result of the debt ceiling fiasco in summer 2011, when Congress could not agree on a limit to the debt the country could amass, and the subsequent failure of the “super committee” (the bipartisan Joint Select Committee on Deficit Reduction), Congress must now find an estimated $1.2 trillion in savings in the federal budget. To do so, Democrats favor a blend of tax hikes and spending cuts. Republicans insist on achieving all of the savings via cuts: no tax increases. Since Republicans are also loath to cut defense spending, “that means it would only be discretionary dollars cut—basically only social service programs,” says Christine Campbell of Housing Works. These include Medicaid, Ryan White and other critical programs that directly fund HIV services. “[Republicans are] going to work at balancing the federal budget on the backs of poor people.”

So the choice is clear, right? If you care about people living with HIV or are yourself HIV positive, you should vote for President Obama and the Democrats, right? Advocates will say so behind closed doors. But don’t count on hearing it publicly.

That’s because almost all AIDS service and advocacy organizations register as 501(c)(3) nonprofits, forbidden by law to endorse candidates. There are discussions in the community about founding a new 501(c)(4), or political action committee, to do more straightforward political fundraising and support in the future. For now, organizations must focus on registering voters—something the national movement is gearing up to do on a large scale—and publicizing the issues that matter.

“If health care reform is [fully implemented] in 2014, you’ll have access to Medicaid, you’ll be able to get medications at no cost for HIV and for heart disease, diabetes, mental health. But if health reform is repealed, good luck with all that,” says John Peller, vice president of policy for the AIDS Foundation of Chicago. “[Informing people of this] is education we can do without running into trouble around the election laws.”

On a warm evening during Gay Pride week in Boston, the local ACT UP chapter gathered in a South End bar amid rainbow balloons and drag performers. Katrina Ciraldo, a 26-year-old Boston University medical student, unpacked a box of fliers that read, “A TAX CAN END THE AIDS CRISIS” over the iconic image of the charging Wall Street bull.

The flier promoted the “Robin Hood tax”—a tax on financial transactions to raise money for -social issues such as HIV/AIDS—and referred to recent scientific findings that have left the HIV community full of optimism. “R.I.P. HIV,” shouted the pages of this magazine. Secretary of State Hillary Clinton said the world’s first “AIDS-free generation is ambitious but possible.” President Obama spoke publicly of the “end of AIDS.” That’s because recent evidence shows treatment can be prevention: Since antiretroviral treatment for people with HIV may reduce sexual transmission risk by up to 96 percent, universal access to meds could be the practical equivalent to ending AIDS. Research toward a cure has also progressed.

Whether and how increased access and research will be funded is a crucial question. “If we’re going to educate voters, and get voters out, then we need to do the other part too,” says Health GAP’s Jennifer Flynn. “Which is, show that we’ve actually got numbers. I don’t think elected officials know [how many Americans are actually living with HIV/AIDS]. We have to show them that.” The answer? 1.2 million people.

During campaigns, candidates are often more sensitive to public pressure and more open to new ideas. What’s more, those inclined to take a particular position may still need public pressure for political cover. Many activists cite the advice Franklin Roosevelt is supposed to have given labor leaders urging him to create the National Labor Relations Board: “I agree with you,” he told them. “Now make me do it.”

That’s why as we go to press, activists are organizing a major march and rally in Washington, DC, during the XIX International AIDS Conference (AIDS 2012). With the eyes of the world focused on DC and HIV for that week, the conference “is the perfect advocacy opportunity,” says Flynn of Health GAP, one of the march’s organizers. The We Can End AIDS Mobilization hopes to bring tens of thousands of activists to the capital to call for everything from ending the criminalization of sex workers, drug users and people with HIV; to stopping attacks on LGBTQ people; to providing money for AIDS housing—and to finding a cure for HIV, a move that would truly end the epidemic.

At that Boston ACT UP meeting, a dozen people ranging in age and experience from college students to gray-haired veteran activists were planning a teach-in about the tax. “[The teach-in will] illustrate how we are planning to build power over the months until the election to make [the Robin Hood tax] a campaign issue for Elizabeth Warren and Scott Brown,” Ciraldo said, referring to the candidates for Massachusetts’s hotly contested Senate seat. “If we bird-dog them, maybe we can get the financial transaction tax in the news on a statewide level.”

But not everyone is comfortable with this confrontational approach. More cautious advocates fear that publicly announcing the ways Democrats have fallen short in their efforts to end AIDS will only give ammunition to the right and alienate potential voters. “This is not the time for a blame game or a lot of negative advertising,” says Kali Lindsey of the National Minority AIDS Council. “There are ways to hold individuals accountable without going on attack mode.”

Further, some fear that being too vocal and too critical will cause the AIDS community to lose access to the Obama administration—or any administration, for that matter.

“We might piss them off and not be their quote-unquote ‘friends’ anymore and therefore lose our quote-unquote ‘seat at the table,’” as Housing Works’ Christine Campbell characterizes it, with no small amount of frustration.

But regardless, history has shown that getting to the table is not an effective end goal. Those who sat at the table with the Obama administration last year to encourage broader access to care were surprised when little more than a month after his December 2011 pledge to expand treatment via PEPFAR, the president recommended an estimated $550 million cut from that program. Both the organization’s officials and the Obama administration claim that the goal of getting 2 million more people into care via PEPFAR can and will be done anyway, but questions remain about what will not be done for people with HIV as a result of the cut.

The real issue is not so much whether to be polite or loud, but rather how to recognize some extraordinary steps the Obama administration has made for people living with HIV—such as providing emergency funding for the AIDS Drug Assistance Program (ADAP) in 2011 and 2012—while pushing for more. To people who say: “We need to get Obama re-elected, [so] we can’t really yell at him,” Campbell responds,  “We need to push him a little farther. [Otherwise] he’s going to stay in the middle. We have to be in the streets, being loud, being visible. Being vocal.”

And we have to ensure that every single voter living with HIV (or concerned about it) realizes that Romney’s “I’ve got nothing more for you on that topic” is exactly what we can expect if he wins. Along with his expressed goal of torpedoing affordable health care and his commitment to never raise taxes (ever), a Romney White House would leave virtually nothing for tens of millions of people living with HIV/AIDS.