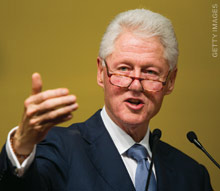 On December 1, 2011, World AIDS Day, former President Bill Clinton made a bold proposition to help save the lives of more Americans with HIV. He suggested that the U.S. government allow low-cost generic versions of patented HIV drugs to be sold domestically until the Affordable Care Act (a.k.a. health care reform) takes full effect in 2014. This would help people with HIV who cannot afford their antiretroviral (ARV) medications during the two year window period between now and 2014, when nearly universal health insurance will be provided to Americans, including hundreds of thousands of people living with HIV. Clinton suggested that inexpensive generic ARVs, which are mostly manufactured in India for use in developing nations, could be made available to low-income HIV-positive Americans currently on AIDS Drug Assistance Program (ADAP) waiting lists. A combined total of more than 6,000 people are on waiting lists for ARVs in 12 states. Clinton made his remarks at an event held at George Washington University in Washington, DC, hosted by ONE and (RED) called “The Beginning of the End of AIDS.” Approximately 900,000 Americans with HIV are not on antiretroviral meds, in many cases because they have no health insurance and can’t afford the drugs. Clinton’s proposal could go a long way toward protecting the health of many. Research shows that people with HIV on effective treatment can reduce their risk of transmitting the virus by 96 percent. Given this fact, providing low-cost meds until the Affordable Care Act kicks in could also help stop the spread of HIV. Smart.