Jim Hubbard speaks about his new documentary United in Anger: A History of ACT UP. 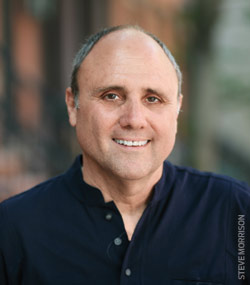 Jim Hubbard is a filmmaker, an archivist and a historian of the AIDS epidemic in the United States. He catalogued and curated the AIDS Activist Video Collection at the New York Public Library. Hubbard also cofounded the ACT UP Oral History Project with Sarah Schulman; the project is composed of more than 128 oral history video interviews with the group’s members and collaborators.

Hubbard and Schulman teamed up again for his most recent project, United in Anger: A History of ACT UP. The feature-length documentary tells the history of the legendary AIDS activist group using archival footage. Hubbard is also an associate producer of How to Survive a Plague, another film, directed and produced by David France, that tells the history of AIDS activism through vintage footage. Hubbard’s earlier impressionistic films include Elegy in the Streets (1989) and Memento Mori (1995).

On April 25, 2012, the day of ACT UP’s 25th anniversary demonstration in New York City, Hubbard was one of the first people on scene to document the protests. Here, Hubbard, a member of the AIDS Activists Video Movement, talks about how activists used art and video to reframe and draw attention to the U.S. AIDS epidemic in the late 1980s and early 1990s.

How did you get involved with ACT UP?
I first filmed ACT UP at the Gay Pride march in June 1987 where they did the concentration camp float [to show how the epidemic was exterminating us]. I have filmed [New York City’s] Gay Pride since 1978, and it’s something I do every year. The first ACT UP–organized event I went to was the demonstration [at the Sloan-Kettering hospital] in July 1987. I eventually became a member.

My footage of the concentration camp float is featured in Elegy in the Streets, a half hour silent film that explores the public reaction to death and to AIDS. It follows my ex-lover, Roger Jacoby, who was also a filmmaker, who was diagnosed with AIDS in August of 1984 and who died in November of 1985.

How did ACT UP succeed in getting its messages heard?
The problem that ACT UP faced was that the powers that be were treating people with AIDS as “the other.” ACT UP [challenged people] to treat people with AIDS as people. If you think your mother, or your brother or yourself could get this disease, you’re going to think about it in one way. If you think some insignificant group of people far away from you is getting it, [you’re less likely to] care and you’re [less likely] to do anything [to help].

ACT UP forced America to stop thinking about people with AIDS as “the other” and helped people think about gay people as “us” rather than as “them.”

How did ACT UP break through to the American public?
[When trying to capture people’s attention,] you have to use tactics that [stop people in their tracks], and that’s what ACT UP did. Certainly, one of the most effective [tools] was their set of graphics. Great graphics grabbed the attention of TV—and TV is what changes America, because Americans believe in television. By presenting something that somebody wanted to put on television, ACT UP got [the attention many groups could not].

Die-ins and the use of [fake] tombstones were initially also [riveting]. But at a certain point they lost their effectiveness. That’s what ACT UP’s political funerals were about: They were intended to say, “OK, you stopped responding to the street theater version of death, so here’s the real thing!”

Have you ever seen or [touched a deceased person’s] ashes? Cremation was less frequent in 1987 than it is now, so [wielding human] ashes was shocking. Typically when people are cremated, their ashes are treated in a particular way. They are put in urns or scattered very solemnly. So to [display, carry and spread human ashes in public] was shocking behavior. To parade through the streets with a coffin containing a real corpse was also shocking.

United in Anger uses an impressive amount of archival footage. Why did so many ACT UP members, including you, document everything from the start?
The need [to document] was there because the mainstream media wasn’t doing it. People were dying of AIDS, but people were also living with AIDS and the information about [survival] had to get out somehow. You could write brochures and copy them, but there was something more urgent about video. And because video in Hi8 [high-eight] cameras came out at that time, suddenly, it was financially feasible to make video. People were immediately drawn to it. We saw right away that this medium was perfect for getting information out.

Filming demonstrations allowed me to look at the way people behave, to look at gesture, the way faces pop out of crowds, the way people relate to each other physically—all these things that otherwise would remain invisible or undocumented.

Because I was slightly older than most of the AIDS activist video makers, I was filming on 16mm and they were filming on video and were thinking about what was necessary in the moment. DIVA TV [Damned Interfering Video Activist TV] made three edited tapes [of key demonstrations], and there was a group of 30 or more people who actually taped at one time or another. In those videos they were saying: This is what we have to show people right this second. The fact that 25 years later it is still interesting and has retained that vitality is just a wonderful surprise.

How did your vision for United in Anger change as you were making the film?
Early on, I was thinking about making an all-encompassing story. But I quickly realized that wasn’t possible. What was necessary was a succinct telling of the story that gave people an entrée into the subject, something that invited viewers to research it further.

For me, the film was created to preserve the history of ACT UP and AIDS activism in the late 1980s and early ’90s. Younger generations have not been exposed to it. The second purpose of the film is to inspire additional activism, whether that’s around AIDS or any other issues.

When you’re telling a historical story you’re at the mercy of what was filmed because you can’t show footage that doesn’t exist. The purpose of the timeline [in the film] is to indicate all of those things that are missing and the other [actions] that were really important.

Given those limitations, we had to construct not only a narrative arc, but also an emotional arc. I wanted to try to get people to feel what it was like to be in the midst of the [extreme] emotion [one felt at the time].

Why is there no footage in the film of people in hospital beds?
That’s very deliberate. That’s what the mainstream media was showing: “The AIDS Victim.” Guys lying in bed, hardly moving, hardly breathing, covered with Kaposi’s sarcoma. Now if that guy in the hospital bed—as sick as he was—was able to talk and say something, it would have been worth the while [to show him]. I don’t know what good it does to show people at their worst moments; you arouse pity, but pity isn’t a particularly useful emotion.

The main tenets of the AIDS Activist Video Movement at the time were to show people living with the disease and how they were fighting it. We also wanted to show that people with AIDS and people fighting in the trenches with them were the real experts on the disease and that their voices should be heard.