I Have Something to Tell You 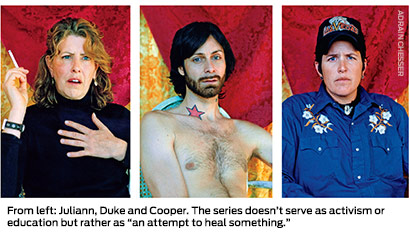 When looking at Adrain Chesser’s portraits from his viral I Have Something to Tell You photo series, you’ll see tears and blank stares mixed in with laughter and smiles. To many, the photographs capture the complicated emotions and fears that come along with HIV disclosure.

But to Chesser, a gay artist currently based in the Pacific Northwest, the images demonstrate something much deeper and internal than a shocking statement about the virus.

He was diagnosed with AIDS nearly 10 years ago. At the time, Chesser says, he felt an emotional, almost physical reaction when he thought of telling his friends. So the artist turned to his camera to help him face his fear of abandonment and shame and to transform the disclosure process into a statement of love, hope and death.

“I never had this ‘I want to start a conversation about the perceptions and stigma of AIDS,’” Chesser says about his motivations for the project. “For me, this work was very personal. It was more of an attempt to heal something.”

For each photo subject, the artist shot two rolls of film during a conversation about his diagnosis. By the project’s end, Chesser photographed 47 friends in what he describes as a “sacred space,” with the curtains from his childhood home serving as the backdrop and the phrase “I have something to tell you” setting up the emotional scene.

The photo series (visit adrainchesser.com to check out a larger selection) opens up the viewers’ own experiences with loss and illness, and ultimately, it reveals Chesser’s undaunted support structure of friends. Nearly a decade later, the artist is living a happy, healthy life with HIV.