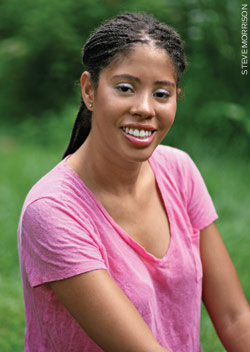 Back in the day, hip-hop’s female emcees exuded power and self-respect (think Salt-N-Pepa, Queen Latifah and MC Lyte). But in 2007, when Kathleen Adams, a student at Fordham University in the Bronx, New York, surveyed the way women of color were portrayed in mainstream media, she didn’t like what she saw.

In response, Adams teamed up with emcee Lah Tere to give birth to Momma’s Hip Hop Kitchen (mhhk.org). The organization offers workshops, community events and college tours that “educate and empower women of color on issues that impact their lives, including HIV/AIDS and reproductive justice,” says Adams, who is HIV negative. Their biggest event, held the first Saturday in March at Hostos Community College in the South Bronx, is an annual hip-hop showcase for female artists in which health facts flow as easily as the beats and rhymes.

As she helps redefine how hip-hop can be a positive influence to woman of color, Adams and Momma’s Hip Hop Kitchen keep the battle against HIV/AIDS blazin’ on the front burner.

What is your greatest achievement?
Graduating from college and graduate school while balancing Momma’s Hip Hop Kitchen and everything else I do.

If you could change one thing about living with HIV, what would it be?
People think it is a death sentence, and it’s not. I have plenty of friends who are living healthy lives and thriving!

What is the best advice you ever received?
My great-grandmother Charlie-Mae Walker told me, “Age doesn’t matter unless you are wine or cheese.”

What person in the HIV/AIDS community do you most admire?
It’s not a person. It’s the Young Women of Color Leadership Council. YWOCLC work in their communities, high schools and colleges to raise awareness of HIV/AIDS.

What drives you to do what you do?
I want to be able to listen to music and watch music videos that do not degrade female bodies of color. I want to actively work to lower the rates of HIV/AIDS within communities of color.