A World Free of HIV?

Michel Sidibé has been executive director of the Joint United Nations Programme on HIV/AIDS (UNAIDS) and under secretary-general of the United Nations (U.N.) since 2009. Last year, he brainstormed with global leaders about how we get to a world without HIV. The answer? In part, a massive scale-up of treatment access. Currently, only 6 million of the estimated 34 million people living with HIV are on treatment. The United Nations has boldly proposed that 15 million people with HIV be treated by 2015 as doing so would save millions of lives and prevent millions of new cases of HIV. Here, Sidibé shares his thoughts on how the world can start to end AIDS. 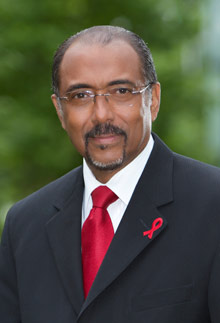 What targets were established at last year’s high level meeting on HIV/AIDS?
The U.N. Political Declaration on HIV/AIDS has committed to: cutting [the rate of] sexual transmission of HIV in half; cutting transmission of HIV among people who inject drugs in half; ensuring that no children are born with HIV and that 15 million people living with HIV have access to lifesaving treatment; cutting in half the number of deaths due to tuberculosis among people living with HIV; and meeting global AIDS resource needs of $22 billion to $24 billion per year.
Is the treatment goal of “15 million people in care by 2015” feasible?
I am convinced that we can [do it,] but it will not happen overnight. The AIDS response already has delivered one of the greatest success stories in public health. Now we need a second wave of activism, political commitment and community mobilization to make “15 by ’15” a reality.

It will take a concerted effort from a broad range of constituencies—from world leaders, politicians and civil society to communities, families and individuals.

“15 by ’15” is ambitious, but it isn’t idealistic; 1.4 million people living with HIV newly started treatment in 2010, representing an increase over 2009 even though available resources flatlined.

What are the biggest barriers to this goal?
First, there is a need for sustainable, long-term investments to close the resource gap. We are working hard to usher in a new compact of shared responsibility.

Second, we need to optimize new approaches to service delivery that are cost-effective and reach the people and communities most in need. We are working closely with Jeffrey Sachs and the Earth Institute to mobilize more than 1 million community health workers in Africa by 2015.

Third, we need to leverage science, technology and innovation—and ensure that breakthroughs are affordable and accessible. This is why I have called for “Treatment 2.0”—the next generation in HIV treatment. It is the road map to breaking the trajectory of costs, delivering better drugs through more effective and efficient ways, better testing and diagnostic approaches, and mobilizing communities.

But above all, we need to address the scourge of stigma and discrimination against people living with HIV and the populations most at risk for HIV that keeps people from getting tested, from accessing services and from demanding their human rights.
Will “15  by ’15” have a significant impact on new HIV infection rates?
Major research breakthroughs have re-confirmed the essential role that ARVs  play in the AIDS response. The HPTN 052 trial showed that when a person living with HIV adheres to an effective treatment regimen, the risk of transmitting the virus to their uninfected partner can be reduced by 96 percent.

Supporting 15 million people in accessing treatment is a critical first step [to having a] major effect on reducing new HIV cases. Models suggest that one third or more of all HIV cases could be avoided if all those eligible under current guidelines receive effective treatment. Treatment for prevention should be available for all people living with HIV in a partnership with a person without HIV, who want to use this as a prevention option.
The United States has allocated more money than any other nation in fighting global AIDS. What can be done to encourage other nations to contribute?
The success of the global AIDS response has been a profound reflection of American vision and leadership. In 2010, the U.S. accounted for 54 percent of total donor disbursements—directly saving millions of lives and preventing millions of new infections. This is not the time to put recent investments at risk. We need to come together to invest now or resign ourselves to paying much more in the future.

Financing the AIDS response is a shared responsibility, and it’s a smart investment. In 2010, funding for international AIDS assistance provided by donor governments declined by 10 percent, marking the first time year-to-year support has fallen in more than a decade. Countries, rich and poor, have to look beyond the near-term costs and recognize the long-term benefits [of investing in the end of AIDS].

It is clear that the poorest nations, in particular those in Africa with the highest HIV burden, will not be able to shoulder investments in the AIDS response by themselves. They will have to rely on international solidarity—and they must be able to count on it.

I am in discussion with leaders, heads of state, CEOs and civil society to develop a compact of shared responsibility for the response. The cost will start to fall after 2015. The returns of our commitments today will pay off in multiples for the generation to come.

Virtually all countries can do more within their relative wealth. Some of the large emerging economies have the ability to finance their own response to AIDS and increasingly support others that have greater needs. South Africa has dramatically increased its domestic spending on AIDS as have China and Russia. The BRICS countries [Brazil, Russian, India, China and South Africa] and other emerging economic powers are bringing a new voice, a new perspective and new solutions to today’s global challenges. These countries have a unique opportunity to accelerate access to affordable medicines and commodities, to share solutions across the global South and to promote a new deal for shared responsibility.
What needs to happen to reduce the stigma around HIV/AIDS?
Stigma and discrimination based on HIV status or sexual orientation are unacceptable. They pose real setbacks to the AIDS response, and they are detrimental to the cohesion and development of our societies overall. Education about HIV and dispelling myths remain essential. Responding to stigma needs to be embedded in cohesive national HIV policy. Legal and policy responses need to be put in place to remove HIV-related stigma and discrimination.

How critical is grassroots advocacy on the part of the HIV community to get a nation to step up its funding for AIDS?
As we all know, the AIDS response has not been a traditional public health campaign—it has been, and remains, a global movement in demand of social justice, led by people living with and affected by HIV. From the earliest years of the epidemic, networks of AIDS activists and service organizations stimulated public awareness, financial commitment, scientific investment and progressive dialogue on stigma and discrimination and the creation of new institutions to respond to the disease—and most of all, political commitment to respond.

The commitment of our leaders will only be sustained if matched by activism and commitment at the community level. Today, the AIDS response needs a new generation of leadership—leadership that reflects both the epidemic and its solutions, that is, from affected countries, communities and young people.