Julie Rhoad, president and CEO of The NAMES Project Foundation, talks with Regan Hofmann, editor-in-chief of POZ, about returning the Quilt to DC this summer.

Julie Rhoad leverages the power of the AIDS Memorial Quilt to usher in a new era of AIDS advocacy.

The AIDS Memorial Quilt is one of the world’s most powerful symbols of the public’s response to the AIDS pandemic. Deemed a National Treasure by an act of Congress, it consists of more than 47,000 panels representing the lives of 94,000 people taken by AIDS. It was sewn by more than 100,000 friends and family members.

This summer, the NAMES Project Foundation, in partnership with POZ, will take the AIDS Memorial Quilt back to Washington, DC, and display the Quilt for the first time since 1996 on the National Mall and at more than 50 sites around the capital. The Quilt in the Capital initiative will happen in conjunction with the XIX International AIDS Conference (AIDS 2012), allowing the Quilt to serve as a connector and catalyst, ambassador and educator, bringing together a new era of support and advocacy for the community of people living with HIV/AIDS today.

Julie Rhoad has been president and CEO of the NAMES Project Foundation, the nonprofit organization that serves as custodian of the Quilt, since 2001. NAMES was founded in San Francisco and is now based in Atlanta. Rhoad’s previous experience as CEO and owner of Candler Creative—an outfit that provides creative direction, design and project management services for large scale events—will undoubtedly serve her well as she orchestrates a citywide display of the Quilt intended to engage people in the fight to end HIV/AIDS.

As Rhoad explains here, the Quilt has a powerful history of awakening the world to the AIDS crisis. She also shares details of the upcoming display, and she talks about how the Quilt will serve as a stage and a conduit this summer for conversations—and how in doing so the Quilt can help people use remembrances of the past to shape a brighter future for people living with the virus.
How would you describe the power of the Quilt?
The Quilt is like no other instrument on earth. It is a place where both people who are on the inside of the HIV/AIDS community and people who don’t think they are connected to HIV/AIDS find inspiration and motivation to act. It’s a great example of how art can inspire advocacy.

Looking back at the last 30 years we find that the Quilt helped start some of the [HIV/AIDS] movement. It said, “Here we are, we are dying, somebody has to pay attention.” Then mothers and fathers, and brothers and sisters, and uncles and aunts began to get involved and take action.

If we are going to end HIV/AIDS, we need people from all sorts of communities to get mobilized and say, “Yes, we can do this.” The arts inspire [people to respond to crisis].

Each individual panel that somebody submits—and they are still submitting panels today; we get about a panel a day—is 3 feet by 6 feet. The design was to make sure that this Quilt represented a human grave of each life, so that we could transform statistics into souls and try to wake up the world.

[The Quilt] doesn’t allow the world to deny that [the epidemic] happened and is happening. The Quilt galvanizes the conversation.

The Quilt is a mirror that reflects society’s responses—some good and some not so good—during these last 30 years of the epidemic.

When drugs [that prevent] mother-to-child transmission were made available, we started seeing fewer baby panels. Today, the Quilt reflects what is happening in the African-American community and around the world.

Originally, [due to stigma] many panels carried only first names. [We had someone say], “Please don’t let anyone know that he was my partner and that I loved him dearly, [I can’t let anyone know because] I’m a teacher.” Years later the teacher came back and said, “I really want to put his last name on the panel, I want my story to be added, I want to be able to say that I was a teacher.”

Moments like these reflect how people grapple with this disease over time.
How will the Quilt get to DC?
We house the Quilt in Atlanta. [Pieces of] the Quilt travel to about 1,000 different displays each year, so we are very used to folding, packing, unfolding and sending it out on the road.

We’ll blanket the capital so that everywhere people turn they can’t help but see the Quilt. The Quilt will be a part of the fabric of the entire week of AIDS 2012. Every day we’ll do new panel dedications. 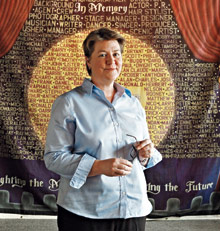 How will the Quilt use social media?
For the past 10 years, I’ve heard over and over, “I want to tell my story, I want my story recorded for posterity.” And then I started to hear people saying, “I really want to see what is deeper in the Quilt, I want to learn that story, I want to share that story.”

So, we are going to have to find ways to accommodate both. We will have oral history booths where people can come and tell their own story, whether it is about making a panel, whether it’s their “Trafalgar Square moment,” or whatever it is. Their life experiences will become yet another volume in this lovely piece of material culture that teaches, informs and inspires.

We’ll have QR codes on various panels where people can [use their smartphones] to look up and listen to stories. We will probably have to iron them onto the edging. We’ll find ways to crowd source the Quilt and responses to the Quilt. We’ll learn some of that in real time onsite, which is actually more exciting than trying to prep for it.

How does the Quilt help people?
When you are in panel-making workshops with people—we’ve been doing them for 25 years—that whole model of gathering around a table to have a conversation, to honor a life, begins to create safe space.

In today’s workshops, people come in and want to help just make a panel for someone. They don’t think they know someone that has the virus. They don’t know whether they [have it] or not. But they have found a safe space to discuss HIV/AIDS.

Where [pieces of the] Quilt go on display—we’re in middle schools, high schools, faith-based institutions, all sorts of entities—people go, “Hmm, maybe it is OK to talk about HIV/AIDS.” It’s a way of starting dialogue in communities and populations who have had a really hard time addressing it.

It’s amazing that we are 30 years into this epidemic and some of the driving factors around why people don’t get tested and don’t have access to care are still stigma, shame and phobia. The Quilt breaks down those barriers.

Go to quilt2012.org for more information.