As the movement to fund needle exchange gained momentum—November saw a favorable World Bank report and two ACT UP disruptions of President Clinton’s speeches—Congress passed, and Clinton signed, a bill freezing the power of HHS Secretary Donna Shalala to fund syringe swaps until April 1, 1998. But Shalala still has the power to certify that science supports lifting the ban. Her silence=death. 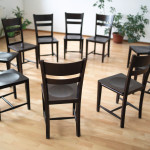