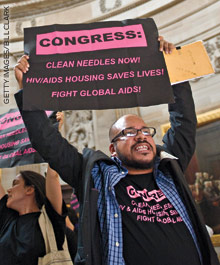 The Issue
On December 16, 2009, President Obama signed into law an end to the 21-year ban on federally funded syringe-exchange programs. Two years later, Congress reinstated the ban on December 19, 2011. Harm reduction programs that use syringe exchange now face a dearth of funding for their lifesaving programs. As a result, it’s predicted we could soon see a spike in HIV/AIDS and hepatitis C rates (both of which can be transmitted through unclean syringes).

Why This Matters To You
Injection drug use accounts for 36 percent of all new HIV cases, according to the Centers for Disease Control and Prevention. Therefore, reinstating the ban on federally funded syringe-exchange programs is a step backward in the fight against HIV/AIDS. Contrary to assertions made by opponents of such programs, federally funded studies have proved that harm reduction programs do not increase illegal drug use. And they prevent the spread of disease. A 1997 study found that HIV rates increased by 5.9 percent per year in cities without syringe-exchange programs and decreased by 5.8 percent in cities with them.

As of December 2011, there were 221 syringe-exchange programs in 33 states, but it’s unclear how many of those programs used federal funding. Syringe-exchange programs that are able to survive without federal dollars may keep their doors open, but those dependent on U.S. government funding will likely shut down.
What You Can Do About It
Speaker John Boehner (R–Ohio) and Representative Hal Rogers (R–Ky.) are the two members of Congress behind the ban’s reinstatement. Let them know you strongly object to these actions by visiting RoadtoWashington.com to sign the Harm Reduction Coalition’s petition against the ban.