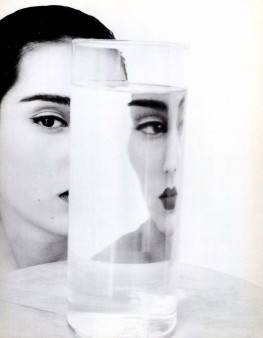 Through the Glass Darkly

You might not expect someone as well-versed in the up-to-date as a fashion photographer to profess equal devotion to the very ancient. But David Seidner says the inspiration for his most recent pictures comes from the ancient world: A greek sculpture of a standing young man dating from the fifth century B.C.

“I think the best thing anyone can do right now is show nudity in a completely natural, nonthreatening way and try to celebrate the body,” he says of the nudes—men and women, front and back, black-and-white—on view in February in New York City. The photos will also soon appear as a book from the German publisher Gina Keheyoff.

“I find myself constantly referring back to Greece. That canon of ideal beauty has meant more to me than anything else.”

Seidner knows a thing or two about beauty. During the ’80s he rose to fame by capturing some of the most truthfully gorgeous moments in this world for the pages of major fashion magazines. But you may know his work even if you don’t read Vogue. He shot—and was the generative force behind—Community Research Initiative on AIDS’ recent “HIVIP” print and TV ad campaign, pairing pictures of well-known people with taglines beginning “I’m HIV positive....”

David Seidner’s approach to photography is not unlike his approach to furniture design and writing, which he also practices: Studied but not arty, experienced but not jaded. And he says that has remained essentially unchanged since the discovery of his own seropositivity, in 1985.

“I have AIDS. Whether or not that comes through in my work, I’m not sure. From the start my work has dealt with melancholia.”