What’s AIDS got to do with it?

Why did POZ pick me to write the sex column? I am a self-described guilty AIDS victim who has written two admittedly autobiographical novels about a sex-crazed homo, but is that enough? It’s not as if I was systematically sleeping my way through Manhattan white pages and only quit at “F” because at that point I would be forced to sleep with myself and I’ve never seen myself naked. I haven’t performed every act described in the New Joy of Sex: I barely made it past the introduction before I fainted, just like Helena Bonham Carter fainted when she saw the Italian with his shirt off in Where Angels Fear to Tread. Let’s face it: sexually, I am dullsville. According to my friend, John Weir, I’m hyper-vanilla, which is to vanilla as Food Town generic vanillin is to Häagen Dazs. I’m completely inhibited. My favorite sexual act is to whine for more.

I remember sex. I used to have it on a fairly regular basis. But for a year and a half I was deeply involved in a MAD (Mutually Assured Destruction) relationship with a Canadian air mattress who had a strong aversion to underwear. I’m sure I’ve had less sex during this, my longest long-term relationship, than at any time in my life since puberty. I can blame part of it on a reduced libido due to various drug combinations, my general physical decline and the fact that Stinky and I were at each other’s throats most of the time.

Soon he’ll be history. I doubt we’ll exchange Christmas cards. Snookems should be out of here by February. Life will be great. There’ll be no more messages inviting Punkin’ head to Hell at Zone DK on the answering machine. But best of all there will be a lower level of tension in the apartment so I might actually be persuaded to spend some time at home. To avoid Muffy, I’ve already seen every movie at the Chelsea Ultraplex twice, including Sliver and Three of Hearts. I might even curt down on the antianxietals.

Now I am determined to try everything at least twice. The clock is ticking, the T-cells are dropping, my magazine subscriptions are lapsing (it’s cheaper just to pick them up on the stands if you don’t think you’ll last the term), and I’m still ambulatory. When I lost 10 pounds from cryptosporidiosis my good friend Jan said, “Wow, you must really be cut!” Nothing like contaminated Chelsea water to give you a firm, flat stomach. In this column I plan on exploring the many varieties of sexual experience. Lucky for me, my doctor administers testosterone shots. Future columns will include “Sex and the Single Seropositive: the Cosmopolitan Slut,” “Sex on Prozac, or Who Needs Orgasms Anyway,” and “Sex with your Ex: Sleeping with the Enemy.”

I once wrote an extremely bad play called The Pathological Flirt. The sole purpose of the play was to provide my friend Tom and me with endless hours of casting couch pleasures. There was a completely extraneous full-frontal nude scene at the end of the first act. When I would find myself saying ridiculous things to attractive strangers at parties, I would apologize, saying, "I was just trying out some dialogue for The Pathological Flirt.“ Now that I was invited to work on this magazine, I can be much more direct. ”I am writing the sex column for POZ. Care to help me with some research?" If any of the more attractive readers of this magazine would like to help me, I can be reached by the usual methods. 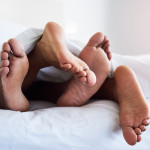