Do you have a right to a doctor’s help to end your life? The U.S. Supreme Court, in a decision last June that in no way put the anguishing issue to rest, said no. In separate cases, plaintiffs had sued Washington and New York states, claiming that bans on physician-assisted suicide are unconstitutional. They argued that while it is legal to hasten death by refusing life-support, terminally ill people who are not on life-support but want to end their suffering are denied administration of lethal drugs. The plaintiffs called this “unequal treatment” because one group of people (those kept alive by such measures as ventilators and feeding tubes) are treated differently from another (the terminally ill who are able to live without these measures). Federal appeals courts agreed; the Supreme Court unanimously did not.

Unanimity is unusual for the Justice, and while all nine reached the same conclusion, they took different roads to get there. Chief Justice Rehnquist’s majority decision was based as much on legal tradition as on universal principles. Invoking concepts of common law that have, for more than 700 years, forbidden aiding death, he wrote that there’s a “distinction between letting a patient die and making that patient die.” Plus, since terminating your own life was never before regarded as a legal right, it could not be so now – in contrast to the withdrawal of life-support, which is consistent with the time-honored right to refuse medical treatment.

Justice O’Connor signed the majority opinion but also wrote her own, leaving the door open for future consideration of the issue. She left unanswered “whether a competent person who is experiencing great suffering has a constitutionally cognizable interest in controlling the circumstances of his or her imminent death,” concluding only that in these two cases the question was moot because Washington and New York allow doctors to give high-dose pain-relieving drugs, even when death results. O’Connor also suggested that state legislatures be permitted to legalize and regulate the practice: “There is no reason to think the democratic process will not strike the proper balance between the interests of terminally ill, mentally competent individuals who would seek to end their suffering and the state’s interest in protecting those who might seek to end life mistakenly or under pressure.” And in a separate opinion that raised the relevance of “basic values” transcending legal conventions, Justice Souter went further, allowing that assisted suicide may, at some point be found to be consistent with individual liberty.

Public opinion seems to contradict the court’s decision. A recent poll found two third of U.S. adults favoring limited legalization of doctor-aided suicide. Activists on al sides are gearing up for battles that, from now on, will be waged mainly state by state. Twenty-one state legislatures this year considered bills that clarify or regulate the use of pain medication for patients near death – including the administration of drugs that may hasten death. In October, the Supreme Court refused to consider the constitutionality of Oregon’s 1994 voter initiative that legalizes assisted suicide, removing a major obstacle to the law’s taking effect. Oregon voters were scheduled to decide on a repeal of the law as POZ 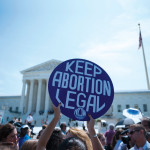