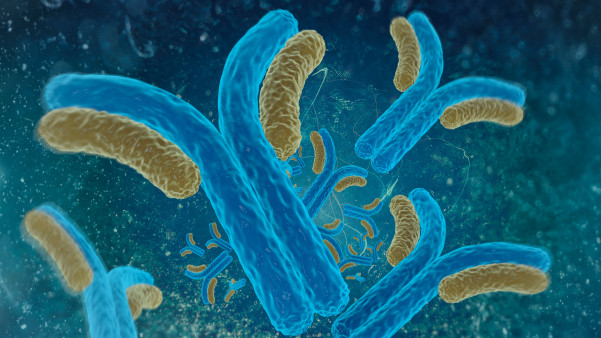 A single infusion of N6LS, an experimental broadly neutralizing antibody (bnAb) from ViiV Healthcare, demonstrated robust antiviral activity as good as or better than that of other investigational bnAbs, offering hope for a new long-acting HIV treatment option, researchers reported at the HIV Drug Therapy meeting in Glasgow. Among 14 previously untreated study participants who received a high or low dose of N6LS, 13 had a virological response.

Antiretroviral therapy can keep HIV replication suppressed as long as treatment continues, but the virus inserts its genetic blueprints into the DNA of human cells and establishes a long-lasting reservoir that is unreachable by antiretrovirals and invisible to the immune system.

One approach for achieving long-term remission is to help the immune system fight HIV. Although people with HIV do produce antibodies against the virus, HIV mutates rapidly and is usually able to escape them. However, some people produce broadly neutralizing antibodies that target parts of the virus that don’t change much. These potent antibodies, derived from patients who naturally control the virus, can potentially be used for treatment.

Scientists have studied several bnAbs for HIV treatment and prevention with mixed results. Earlier this year, researchers reported that a combination of two bnAbs, 3BNC117 and 10-1074, led to prolonged viral suppression after stopping antiretrovirals. In another study, one person treated with 3BNC117 plus the latency-reversing agent romidepsin remained in remission for more than three years. A third study showed that 3BNC117 plus 10-1074 suppressed HIV in people who had started antiretroviral therapy early but only if their virus was susceptible to both bnAbs. Studies of bnAbs for prevention have also found that effectiveness depends on HIV’s sensitivity to specific antibodies.

Peter Leone, MD, of ViiV, and colleagues evaluated the safety, pharmacokinetics and antiviral activity of N6LS in the Phase IIa BANNER trial. The study enrolled 14 people in the United States, Canada and Argentina who had not yet started antiretroviral treatment. All but one were men, and the median age was 30. At study entry, they had a viral load of at least 5,000 and a CD4 count of at least 250.

All participants received a single intravenous infusion of N6LS, either a weight-based dose of 40 milligrams per kilogram or a fixed dose of 280 mg, which works out to approximately 4 mg/kg—about one tenth the weight-based dose. The researchers assessed viral suppression while N6LS was used alone, known as monotherapy. People who did not reach a viral load below 0.5 log (about 3 copies/mL) by day 11 or experienced viral rebound after an initial response started antiretroviral therapy right away; all remaining participants started standard treatment at day 84.

The single infusions produced strong antiviral activity at both dose levels. Virological response was observed in all eight participants who received the higher dose and three of the four people who received the lower dose. The median viral load reduction was 1.72 log in the 40 mg/kg group and 1.18 log in the 4 mg/kg group. The median duration of response before viral rebound in the higher-dose group was 35 days.

Treatment was generally safe and well tolerated. There were six adverse events considered to be drug-related (abdominal or gastrointestinal pain, itching, weakness and muscle pain) and two injection site reactions, none of which were severe or led to treatment discontinuation.

When administered at 40 mg/kg, N6LS led to a decline in viral load consistent with the antiviral activity seen with other therapeutic bNAbs, the researchers reported. However, when using the lower dose, the viral load decline and duration of response exceeded that of other bnAbs administered at similarly low doses. The ability to administer bnAbs at lower doses makes treatment more practical and could potentially enable delivery via injection rather than IV infusion.