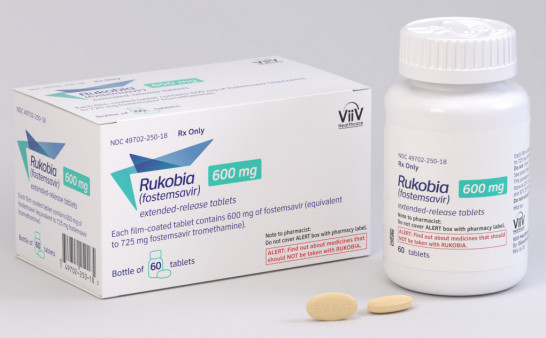 The novel attachment inhibitor led to viral suppression in 60% of people with extensive prior treatment.

On July 2, the Food and Drug Administration approved Rukobia (fostemsavir) for people with multidrug-resistant HIV who have used several previous antiretroviral medications and whose current regimen is not working due to resistance, intolerance or safety considerations.

About 6% of adults with HIV who are on treatment fall into this category and have few or no treatment options, according to ViiV Healthcare, which developed and manufactures the new drug.

Approval was based on findings from a Phase III clinical trial that showed nearly two thirds of highly treatment-experienced participants who received Rukobia with an optimized background regimen were able to maintain viral suppression for two years.

“As a novel HIV attachment inhibitor, fostemsavir targets the first step of the viral lifecycle offering a new mechanism of action to treat people living with HIV,” Jacob Lalezari, MD, director of Quest Clinical Research in San Francisco, said in a ViiV press release. “In the BRIGHTE study, fostemsavir in combination with other antiretrovirals effectively achieved and maintained long-term viral suppression and demonstrated clinically meaningful rise in CD4 T cell count even among heavily immunocompromised patients. These are exciting advances for the heavily treatment-experienced population and an advancement the HIV community has long been waiting for.”

Rukobia is a novel type of entry inhibitor that prevents HIV from attaching to host cells. It binds to the envelope protein that makes up the spikes on HIV’s outer coat, which prevents the virus from attaching to CD4 receptors on T cells and using them to gain entry.

The randomized part of the study included 272 people on a failing antiretroviral regimen with unsuppressed viral load. They were assigned to receive either 600 milligrams of Rukobia twice daily or a placebo along with their existing regimen for eight days. After that, everyone received Rukobia plus an optimized background regimen tailored to include the most active available drugs according to drug-resistance tests. The people in this cohort had to have at least one available fully active approved drug, which for a majority of them was the integrase inhibitor dolutegravir (Tivicay, also in the Dovato, Juluca and Triumeq combination pills).

In addition, 99 people with no remaining fully active approved drugs were included in a nonrandomized compassionate use cohort. They could include other experimental drugs in their optimized regimen; many added the monoclonal antibody Trogarzo (ibalizumab), which had not yet been approved.

About three quarters of the study participants were men, and 60% were over age 50. Nearly 30% had a very high viral load above 100,000. The median CD4 count was low—99 in the randomized cohort and just 40 in the compassionate use cohort—reflecting advanced immune suppression.

During the first eight days, when Rukobia was being used as functional monotherapy with other failing drugs, it reduced viral load more than the placebo.

After 48 weeks, 54% of people using Rukobia plus an optimized regimen in the randomized cohort and 38% of those in the compassionate use cohort had undetectable viral load (below 40). By 96 weeks, the proportion with viral suppression rose to 60% in the randomized cohort and remained stable, at 37%, in the compassionate use cohort

What’s more, Rukobia led to substantial gains in CD4 cells. By week 96, people in the randomized cohort had gained an average of 205 cells, with the largest increases seen in those who started with the lowest levels. In the nonrandomized cohort, the average gain was 119 cells.

Rukobia is general safe and well tolerated. The most common adverse reactions are nausea, fatigue and diarrhea. In the BRIGHTE study, 7% of participants stopped treatment because of adverse events, and 3% had drug-related serious adverse events, including severe immune reconstitution inflammatory syndrome.

“Some members of the HIV community face very challenging treatment journeys and do not respond to available therapies for a variety of reasons,” said Gabriel Maldonado, founder and CEO of TruEvolution in Riverside, California, which fights for health equity and racial justice for LGBTQ people. “The approval of fostemsavir provides a sense of renewed hope for these adults who have few or no viable treatment options left and have been awaiting alternative medicines to control the virus.”