The Trump administration’s efforts to ban service members who have HIV are not based on current science, the judge stated.

Two active duty airmen living with HIV can continue to serve in the Air Force—at least for now—thanks to a ruling from the U.S. Court of Appeals for the 4th Circuit, according to a press release from Lambda Legal. The ruling prevents other members of the Air Force from being discharged simply because they have HIV.

The case, Roe & Voe v. Esper, formerly Roe & Voe v. Shanahan, involves two airmen who were discharged in 2018 because they have HIV; the discharge resulted from the Trump administration’s “Deploy or Get Out” policy.

This is not the end of the case, though. It means the airmen can continue service while the case moves forward to trial. According to The Associated Press, U.S. District Judge Leonie Brinkema, not a jury, will decide the merits of the case at trial.

“This is the second federal court to find that the Trump administration’s attempt to discharge these individuals is unlikely to pass legal muster,” said Scott Schoettes, counsel and HIV project director at Lambda Legal in the press release. “Today’s ruling clears the way for us to definitively prove at trial that a person living with HIV can perform the job of soldier or airman as well and as safely as anyone else. We are confident Roe and Voe will succeed because the government is unable to offer a reasonable justification for their discriminatory treatment of servicemembers living with HIV.”

“A ban on deployment may have been justified at a time when HIV treatment was less effective at managing the virus and reducing transmission risks,” wrote Judge James Wynn in the opinion. “But any understanding of HIV that could justify this ban is outmoded and at odds with current science. Such obsolete understandings cannot justify a ban, even under a deferential standard of review and even according appropriate deference to the military’s professional judgments.”

“I joined this lawsuit because I feared I would be discharged from the military, but also because of the lingering stigma and many misconceptions about what it is to live with HIV today,” plaintiff Richard Roe said in the Lambda Legal press release. “I am very pleased the 4th Circuit decision will allow us to continue serving the country we love.”

The resulting lawsuit was filed anonymously to protect the plaintiffs’ identities. The case was filed by Lambda Legal and OutServe-SLDN, which partnered with law firm Winston & Strawn. Lambda Legal is a nonprofit legal defense group that fights for HIV and LGBT communities; OutServe-SLDN is an association that serves LGBTQ veterans and military members.

In February 2019, a judge in a lower court stopped the discharge of the two airmen. This month’s federal appeals court decision upheld that ruling. 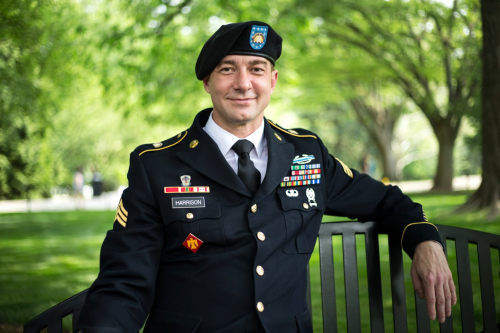 Sergeant Nick Harrison, the subject of another HIV-related lawsuitCourtesy of Lambda Legal

For more background on this case, plus two similar lawsuits, see “Military and Medical Experts Denounce Trump’s HIV Discharge Policy.” And for a POZ interview with Peter Perkowski, the legal and policy director for OutServe-SLDN, read “Stronger Together.”