Men who have sex with men (MSM) in a study of a nondaily dosing protocol of Truvada (tenofovir/emtricitabine) as pre-exposure prophylaxis (PrEP) against HIV had a lower rate of sexually transmitted infections (STIs) when provided antibiotics to take following condomless intercourse. More research is needed to determine the long-term efficacy of such a post-exposure prophylaxis (PEP) means of preventing STIs as well as the protocol’s possible effects on the development of antibiotic resistance among such infections.

Jean-Michel Molina, MD, of the Hôpital Saint-Louis in Paris, presented findings from the research at the 2017 Conference on Retroviruses and Opportunistic Infections (CROI) in Seattle. His team conducted an STI-prevention substudy of 232 MSM participants in the open-label phase of the IPERGAY study, which examined a nondaily PrEP dosing protocol geared around acts of intercourse. 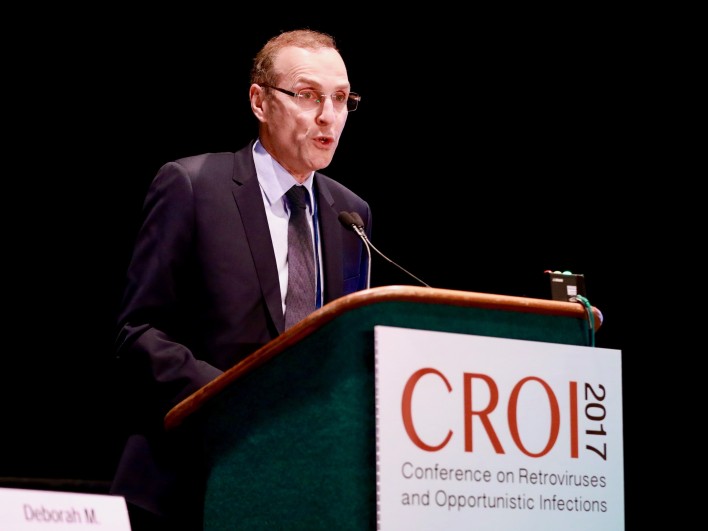 Jean-Michel Molina, MD, of the Hôpital Saint-Louis, in Paris, at CROI 2017 in SeattleBen Ryan

Over the last few years, there has been an increase in STIs in a number of nations, including the United States, in particular among MSM. This trend began before the advent of PrEP. However, recent research has suggested that starting PrEP may lead MSM to take greater sexual risks and in turn increase STI infection rates. The regular STI testing that is a part of the routine monitoring requried for a PrEP prescription may help mitigate this risk; a Centers for Disease Control and Prevention (CDC) mathematical modeling study presented at CROI suggests that such routine monitoring could in fact lower overall STI rates among MSM.

The overall rate of condom use was low among participants in the IPERGAY study and declined after they switched from the placebo phase to the open-label phase (when they all started to receive and knew they were receiving Truvada). Thirty-nine percent of the men were diagnosed with at least one STI during the open-label phase.

Between July 2015 and January 2016, the participants in this substudy were randomized into two even groups of 116 men each. One group received a supply of the antibiotic doxycycline (in 100 milligram pills) with instructions to take one at most 72 hours following condomless sexual intercourse and not to exceed six pills per week. The other group did not receive the antibiotic. The men had high initial STI rates. A total of 106 men in each group completed the study’s follow-up.

All participants received HIV and STI risk-reduction counseling and condoms and were tested every eight weeks for HIV and STIs, including syphilis, chlamydia and gonorrhea.

This indicated that doxycycline PEP lowered the risk of chlamydia by 70 percent and syphilis by 73 percent.

Seventy-one percent of the STIs had no symptoms.

Doxycyline proved safe and well tolerated. Just eight of the men in the doxycycline arm (7 percent) stopped taking the antibiotic because of gastrointestinal problems. A respective 53 percent and 41 percent of those in the arm receiving doxycycline and the arm that did not receive the antibiotic experienced gastrointestinal adverse health events; this difference was not statistically significant.

There was no apparent change in sexual behavior between the two study arms during the follow-up period.

The researchers concluded that on-demand post-exposure prophylaxis with doxycycline reduced the rate of chlamydia and syphilis in high-risk MSM and has an acceptable safety profile. They are currently conducting further research into how doxycycline as PEP might affect the emergence of drug-resistant strains of STIs.

During an address he gave about the overall use of antibiotics to prevent STIs in advance of presenting his data on this particular study at CROI, Molina stressed, “What we are fearing now is untreatable gonorrhea,” and noted, “We are not there yet.”

The CDC recently issued an urgent alarm about signs of emerging drug resistance in a cluster of gonorrhea infections identified in Hawaii.

Because of the remaining questions about doxycycline as PEP among MSM on PrEP, Molina told CROI attendees that he did not recommend the antibiotic’s use for this purpose at this time.