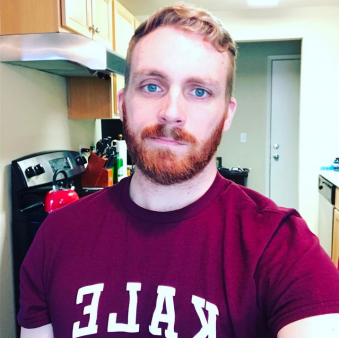 How an HIV Diagnosis Inspired This Sexy Nurse to Go Vegan

Daniel Dyviniak is a finalist in PETA’s Sexiest Vegan Next Door contest—and here’s how you can vote for him!

He may not eat beef, but Daniel Dyviniak is no stranger to beefcake! The HIV-positive gay nurse is a finalist this year in the annual Sexiest Vegan Next Door contest held by People for the Ethical Treatment of Animals (PETA).

In its profiles on the top 10 female and 10 male contestants, the animal rights group has this to say about the nurse:

After being diagnosed with HIV, Daniel became much more concerned with the well-being of others, including animals, and went vegan. He works as a nurse and advocates a healthy, plant-based diet to people who have been newly diagnosed with HIV around the world as a way to stay healthy in spite of the harsh effects of the medication.

Tracy Reiman, PETA’s executive vice president, tells the NewNowNext blog more about the contestant from Tacoma, Washington: “As a nurse, Daniel protects the well-being of his patients, and as a compassionate vegan, he not only protects himself but also prevents more than 100 animals a year from being killed for food.”

Dyviniak tested HIV positive in 2013 during a routine screening, reports the Tacoma News Tribune in an article on the contestant. Before becoming vegan, he tells the paper, he had horrible eating habits and weighed 285 pounds.

You can learn (and see) more on his Instagram feed, which shows that Dyviniak is open about his HIV status (and his love of Friends):

Voting in the PETA contest ends on June 21; you can view the contestants and vote here. One male and one female winner each will be awarded a trip for two to Hawaii; they’ll be announced on June 28.

Go check out this article that @thenewstribune wrote about me today! The link is in my bio! Thank you for the awesome article! ????????☺️❤️???? #vegan #nurse #murse #instavegan #whatveganslooklike #joyfulvegan #happy #healthy #hivpositive #lgbt