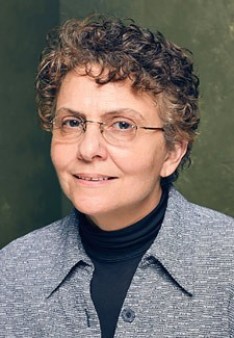 Jean Carlomusto on ACT UP lesbians, DIVA and her Larry Kramer documentary

Filmmaker Jean Carlomusto has been acting up and fighting AIDS since back in 1987, when she started a GMHC cable TV series called Living With AIDS. Here, she tells POZ about her newest work, the documentary Larry Kramer in Love & Anger. It debuts on HBO in late June in honor of Kramer’s 80th birthday.

Kramer has done so much, from co-founding ACT UP to writing The Normal Heart. Does your film focus on a specific aspect of his life?

It’s an intimate look at his entire life, from his childhood to the present. Through much of 2014 he was really sick, so I did a lot of shooting in the hospital. Everybody, even the head of the [National Institutes of Health], has a certain degree of fear of Larry Kramer, but this makes you see his fragility, vulnerability and mortality. It’s a warts-and-all documentary. I wasn’t going to make Larry into a saint.

Did you personally know him from your early AIDS activist days?

I wanted to interview Larry for the cable show, but he was persona non grata—he had called the president of GMHC a murderer in print. When I heard he was part of a group calling for a demonstration down on Wall Street [in 1987], I went with my camera and documented that first action, and after that I stayed very involved with ACT UP until the early ’90s. There was a whole movement of video artists. We were an affinity group of ACT UP, called DIVA for Damned Interfering Video Activists. Our job, as we saw it, was to document actions so we could get the word out and, also, in case anyone got beat up.

Why is this film important for POZ readers?

It has to do with a man who was at the forefront of Gay Men’s Health Crisis and ACT UP. The activist group ACT UP not only pushed a successful strategy that led to treatment for HIV but also demonstrated against the [Centers for Disease Control and Prevention] to change the definition of AIDS so that women and poor people could get services.

Why did you get involved in AIDS activism?

My roommate was gay, and I saw how [the virus] was impacting the gay men I knew. Plus, my lover at the time was diagnosed with Hodgkin’s lymphoma. My experience with her going through a serious health challenge let me see how homophobia was pervasive. I just knew AIDS was going to be horrible, and I wanted to get involved.

The role of lesbians in ACT UP might surprise people.

I’m determined that people acknowledge that lesbians were there and we did fabulous things, including changing the definition of AIDS. I cover some of this in my previous documentary Sex in an Epidemic.

As you made the new film, did anything surprise you about Larry Kramer?

Yes. That he’s a very shy and very sweet man. Just don’t piss him off!