The Mosaico study will enroll gay and bisexual men and transgender people at significant risk for the virus.

The third current major trial to examine a promising HIV vaccine candidate will launch later this year, enrolling cisgender men and transgender individuals who have sex with men, trans people or both. The randomized, double-blind, placebo-controlled Phase III efficacy study, called Mosaico, or HVTN 706, will run out of approximately 55 clinical research sites in the United States, Mexico, South America and Europe. A complementary study for women in Africa is already under way.

The trial’s launch was announced in advance of the 10th International AIDS Society Conference on HIV Science (IAS 2019), taking place this week in Mexico City. The study is the result of a private-public partnership between Janssen; the National Institute of Allergy and Infectious Diseases (NIAID), a division of the National Institutes of Health (NIH); the NIAID-funded HIV Vaccine Trials Network (HVTN), which is headquartered at the Fred Hutchinson Cancer Research Center in Seattle; and the U.S. Army Medical Research and Development Command.

“We are committed to developing a safe and effective preventive HIV vaccine suitable for the global populations most vulnerable to HIV acquisition,” NIAID director Anthony S. Fauci, MD, said in an NIH press release. “Ensuring that investigational vaccines are evaluated in diverse populations is critical to achieving this goal.”

Mosaico will enroll 3,800 HIV-negative men and transgender people in good health who are 18 to 60 years old and at risk of acquiring the virus. To be considered at risk, they must meet one of the following criteria within the past six months:

These individuals should not have an existing strategy to prevent themselves from acquiring HIV. In particular, they cannot be taking pre-exposure prophylaxis (PrEP) upon enrolling in the study.

That said, during the study, the participants will receive a comprehensive HIV prevention package that includes the option of taking daily oral PrEP and also includes risk reduction counseling, condoms, lubricant and sexually transmitted infection (STI) testing and treatment. They must not take long-acting injectable PrEP (currently in a late-stage clinical trial and not yet approved by the Food and Drug Administration) until they have been in the study for 24 months or longer.

Study sites will be located across the United States as well as in Argentina, Brazil, Italy, Mexico, Peru, Poland and Spain. 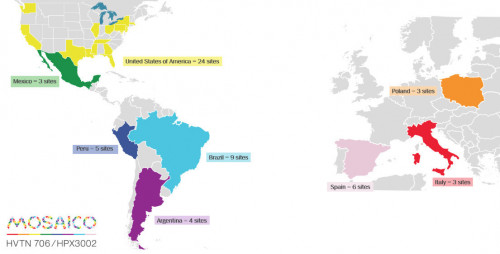 The participants will undergo a 45-day screening period, at the end of which they will be randomized to receive the vaccine or the placebo. They will receive four injections over a 12-month period.

Those receiving the active vaccine will receive four doses of a vaccine candidate known as Ad26.Mos4.HIV. This vaccine uses an engineered common-cold virus that does not cause illness, called Ad26, to deliver four mosaic immunogens—multiple computer-designed components selected for their strong potential to prompt a powerful immune response against the wide diversity of HIV strains circulating around the world. The final two vaccinations will also include a pair of HIV envelope proteins, specifically the gp140 protein from the clade C virus and the mosaic gp140 envelope protein, along with an aluminum phosphate adjuvant meant to boost the immune response.

“The search for a vaccine began the moment HIV was first identified over 35 years ago, but there have been many challenges along the way due to the unique properties of this virus, including its global genetic diversity,” Johan Van Hoof, MD, the global therapeutic area head of vaccines and managing director of Janssen’s vaccines division, said in a press release. “Janssen is committed to advancing clinical trials to help build an HIV-free future. With each new study, we are working to optimize the mosaic-based vaccine regimen.”

The ongoing, fully enrolled Imbokodo vaccine trial, also known as HVTN 705, is testing the same vaccine regimen among women in sub-Saharan Africa, but in that trial, the latter pair of vaccinations do not include the addition of the mosaic gp140 protein. Imbokodo is expected to complete its primary phase in November 2020, produce initial results in 2021 and wrap up in the spring of 2022. These results may provide a window into how the new trial will fare.

Meanwhile, the Phase IIb/III HVTN 702 trial, which began in late 2016 among men and women in Southern Africa, is assessing a retooled version of the only vaccine to show any efficacy, albeit a modest one, in the RV144 Thai study that was published in 2009.

“The Mosaico trial is an important step toward developing a safe and effective HIV vaccine for people worldwide, including men who have sex with men and transgender people, who could greatly benefit from a preventive HIV vaccine,” said Susan Buchbinder, MD, of the University of California, San Francisco, who is the protocol chair of the Mosaico trial.

For a POZ feature article on how high-tech computers designed and selected the components of this vaccine, click here.

To see the ClinicalTrials.gov description of the trial, including a list of the trial sites, click here.