The news first broke in February about a man in Amsterdam who contracted non-drug-resistant HIV while apparently adhering well to PrEP.

Fleshing out their initial, limited report, researchers have published a full case study about a man in Amsterdam who contracted non-drug-resistant HIV while apparently adhering well to Truvada (tenofovir disoproxil fumarate/emtricitabine) as pre-exposure prophylaxis (PrEP). In the report, published in The Lancet HIV, the investigators analyze the atypical results of various types of HIV tests conducted during the first weeks of the man’s infection, using these and other clues to speculate about how he could have contracted the virus.

In theory, PrEP may have succeeded in constraining an HIV infection within the man’s rectal tissues. This infection may have prompted signs that he was HIV-positive despite the fact that the infection had not spread throughout his body. Then, after the researchers caring for him took him off Truvada for fear his virus would develop drug resistance, that localized infection may have spread and established a permanent systemic infection. He was off PrEP for a month before starting a fully suppressive antiretroviral (ARV) regimen to treat HIV.

The Dutch case study was first presented in February at the 2017 Conference on Retroviruses and Opportunistic Infections (CROI) in Seattle. It concerned a 50-year-old man who has sex with men living in Amsterdam who began taking PrEP in September 2015 through the AmPrEP demonstration study. 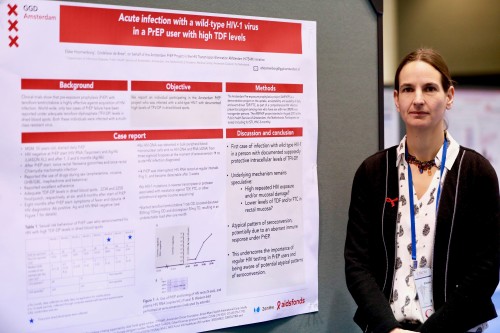 This case is considered the third instance of documented PrEP failure and the first in which the individual in question did not contract a strain of HIV with mutations conferring resistance to the drugs included in Truvada. The other two cases were also among men who have sex with men and were reported in 2016.

He was diagnosed with rectal chlamydia and gonorrhea in both December 2015 and March 2016.

Routine HIV tests conducted through the AmPrEP study indicated that the man remained HIV-negative one, two and six months into his time on PrEP. Dried blood spot tests conducted on March 7 and May 24—these tests can essentially look back in time about eight weeks to detect adherence to PrEP—both indicated he was likely adherent to the daily Truvada regimen.

On May 18, 2016, nearly eight months into taking PrEP, the man took an HIV test at a different clinic in the Netherlands (one unaffiliated with the study), prompted by a fever and difficulty urinating. This instigated a period during which the AmPrEP researchers repeatedly conducted various types of HIV tests, which produced confoundingly atypical results.

Normally, tests for HIV will detect the following effects in sequence during the initial weeks of infection: first, HIV RNA (the virus’s genetic material), which is measured by what’s known as a PCR test, will appear; then the p24 and p31 viral antigens (proteins from HIV), then the p17 antigen and finally the gp120 antigen, all measured by an ELISA test, will emerge; and last, the immune system will develop HIV-specific antibodies, identified through a Western blot test.

The test the man took on May 18 was a fourth-generation antibody and antigen test, which was reactive, indicating a positive result. That test looks for both HIV antibodies and the p24 antigen, so a reactive test result indicates the presence of either. At this time, he was also diagnosed with a rectal case of a sexually transmitted infection (STI) known as Lymphogranuloma venereum, or LGV, which causes ulcers and is associated with transmission of hepatitis B and C viruses (HBV/HCV) and HIV. He also had E. coli in his urine.

To confirm the fourth-generation HIV test, on May 24 the AmPrEP researchers conducted another fourth-generation test; two kinds of tests for HIV RNA, including a viral load assay that measured HIV’s presence, with a detectability threshold of 40 copies per milliliter, and a qualitative test of the genetic material present; and a Western blot test. The results of the tests were unexpected: The man tested negative for HIV RNA and negative for the p24 antigen but positive for HIV-specific antibodies.

Strangely, antibodies, which are typically the last sign of HIV to appear during an acute, or very early, infection, were the first to surface in this man. The Western blot test indicated that the HIV antibodies were weakly reactive to the gp160 antigen, which typically surfaces toward the end of the initial infection phase, certainly after the emergence of a detectable viral load.

At this time, the AmPrEP researchers decided to take the man off PrEP, concerned that if he had acquired HIV and kept taking Truvada his virus might develop drug resistance.

On May 30, the investigators again ran a viral load test and found the result was negative, indicating a viral load below 40. They also tested for HIV’s genetic material and could not detect any in what are known as peripheral blood mononuclear cells, which researchers analyze in an attempt to measure the size of the viral reservoir. In order to establish a systemic, lifelong infection, HIV must create a reservoir of cells that ultimately harbor HIV even in the face of fully suppressive ARV treatment for the virus.

The investigators took a biopsy of the man’s large intestine on June 6, finding no evidence of HIV’s genetic material in what are known as bulk mononuclear cells.

Finally, on June 14, a month after his first reactive fourth-generation HIV test, a PCR test revealed a viral load of 12,882, which shot up to 101,156 by the time another viral load test was conducted on June 23. A Western blot test also conducted on June 23 showed positive results for the gp120 and gp160 antigens and a weakly positive result for the p24 antigen—again, a peculiar finding, since p24 typically shows up first.

At this time, the man was put on a full ARV treatment regimen of Truvada, Prezista (darunavir) and Tivicay (dolutegravir).

The Dutch investigators have various theories about why this man experienced such an unusual course of early infection. They speculate that PrEP may have been “overwhelmed” by three main factors: the sheer volume of HIV that may have been deposited into his rectum, given his high rate of receptive condomless intercourse; injury sustained to the rectal lining through such repeated sexual acts; and inflammatory STIs in the area, which research indicates facilitates HIV acquisition.

Additionally, perhaps the concentrations of the two drugs in Truvada in rectal tissues were not always optimal despite the man’s apparent good adherence to the daily drug regimen.

Because the man’s viral load only became detectable after he was taken off PrEP, the study authors figure that he may have had an HIV infection that Truvada had contained within the rectal mucosa (mucus membranes lining the rectum), one that had not spread throughout his body. Insufficient levels of the ARVs in Truvada within the rectal tissues may have allowed such a localized infection to thrive and to prompt certain immune responses as seen in the results of those initial HIV tests.

Studies have found that when animals are given PrEP, they may, even without an actual HIV infection, develop HIV-specific antibody responses.

Injection drug use, the investigators concluded, was not likely the cause of the infection because the man reported that when he did inject drugs on two occasions he used clean injection equipment. Additionally, research indicates that PrEP is indeed effective at preventing HIV transmission through injection drug use.

The man could also have contracted HIV after stopping PrEP. But he has repeatedly denied engaging in condomless sex and injection drug use during the period immediately following going off Truvada. So the study authors consider this possibility unlikely.

“Importantly,” the study authors write in their conclusion, “our findings illustrate the possibility that people who acquire HIV while on PrEP might show atypical patterns of seroconversion.”

A study published in August backs up this assertion, finding that those who contracted HIV while participating in PrEP studies (likely because of poor adherence to Truvada) who then proceeded to take Truvada during the early phase of their infection experienced a delay before tests finally accurately diagnosed them as HIV positive.

The Dutch researchers figured that if they had never interrupted the man’s PrEP or had immediately transitioned him to an HIV treatment regimen without the month gap that did occur, it is possible he never would have developed a full, lifelong infection. This observation may inform the decisions of clinicians in the future, should similar cases emerge.

However, if the virus were never detectable in the Dutch man, the only way to determine whether he ever had a systemic HIV infection would be to interrupt his ARV treatment (a process known as a structured treatment interruption). Without such a planned break in treatment, there would perhaps be no way to know for certain whether the individual was taking ARVs without actually needing them.

“Taken together,” the study authors wrote, “this report emphasizes the importance of regular HIV testing of PrEP users and promotes awareness of atypical patterns of seroconversion. Provision of PrEP should be closely monitored by trained health care providers.”