What’s Next for the NYC AIDS Memorial?

Cofounder Christopher Tepper walks us through phase 2 of the project and shares how his own ignorance and anger inspired the structure.

The New York City AIDS Memorial enjoyed a public dedication on a chilly but sunny December 1, 2016, World AIDS Day. Cofounded by Christopher Tepper and Paul Kelterborn and over five years in the making, the memorial was designed by architects from Studio ai and includes an installation by visual artist Jenny Holzer. But work on the memorial is far from complete. POZ spoke with Tepper to get the full scope of the project.

Congratulations on the public dedication on World AIDS Day. Walking by recently, I noted the memorial is closed off again. Is there more work left to do on the physical structure?

Yes. The major thing that’s left is the delivery of the benches. The backs of the benches have signage that reads “New York City AIDS Memorial” and face both streets [the memorial is at the intersection of Greenwich Avenue and West 12th Street]. And unlike the [adjoining park], the memorial area itself—the structure and the plaza it creates—will be open 24/7. The memorial will have lighting—down lighting and up lighting on the canopy, in the water and embedded in the benches. This will make the space feel different and more like a room at night and really highlight the sculpture.

What’s the time frame regarding the completion?

The benches should arrive in early January from the stone fabricator in Minnesota. We can’t open permanently because of the lighting, really, not because of the benches. By late January, we should be 100 percent open and [will turn over the] memorial and park to the city parks department. 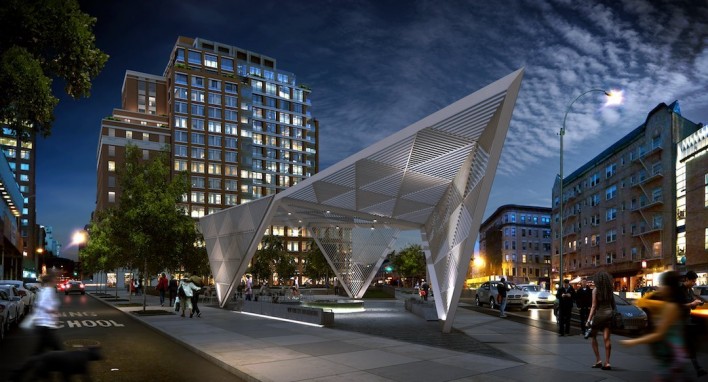 At that point, what will be the role of your group?

The New York City AIDS Memorial organization is going to have two roles going forward. Primary is acting as conservancy for the memorial, raising funds to keep it beautiful and maintain it. Our phase 2 is developing educational opportunities and arts programming to really get people to engage.

I am very proud of the site—not just because it’s across from St. Vincent’s hospital [ground zero of the epidemic] but it’s also a block from the LGBT Center, where ACT UP started, and other locations. Larry Kramer’s apartment is a few blocks away. [Noted AIDS researcher] Dr. Joseph Sonnabend had his clinic a few blocks away. So much of the history of New York City’s early AIDS movement and caretaking happened near there. The memorial makes sense in that site because it’s relevant.

Our original mission was to commemorate history but also create a dialogue—especially an intergenerational dialogue—about what happened and why and what we can learn from it. The physical space is important, but now we want to leverage it to get people to the site—school groups, for example. We’re exploring with a couple of digital partners how we can integrate more traditional historical content and first-person narratives at the memorial that you could access through your smartphone while you’re there.

What’s the timeline for that phase?

We would like to at least announce within the next 12 months who our partner is and then have a development timeline. We’ve been in the stage of talking with different partners, exploring what technology is out there and what’s been used best and trying to hone in on what we want ours to do. We would like to do two things. Give people access to oral history and more traditional historical content at the site. We also want to create an opportunity where people can share and upload their own stories and photos of people they lost and share their stories in a way that gets recorded and archived.

We need to document and record the stories of the leaders of the movement and those in government, and we want to capture the grassroots history of what it was like to live through the epidemic for people who may or may not have been in ACT UP, such as volunteers who took care of a neighbor or friend or lover, who experienced [the epidemic] in more of a regular-citizen way. 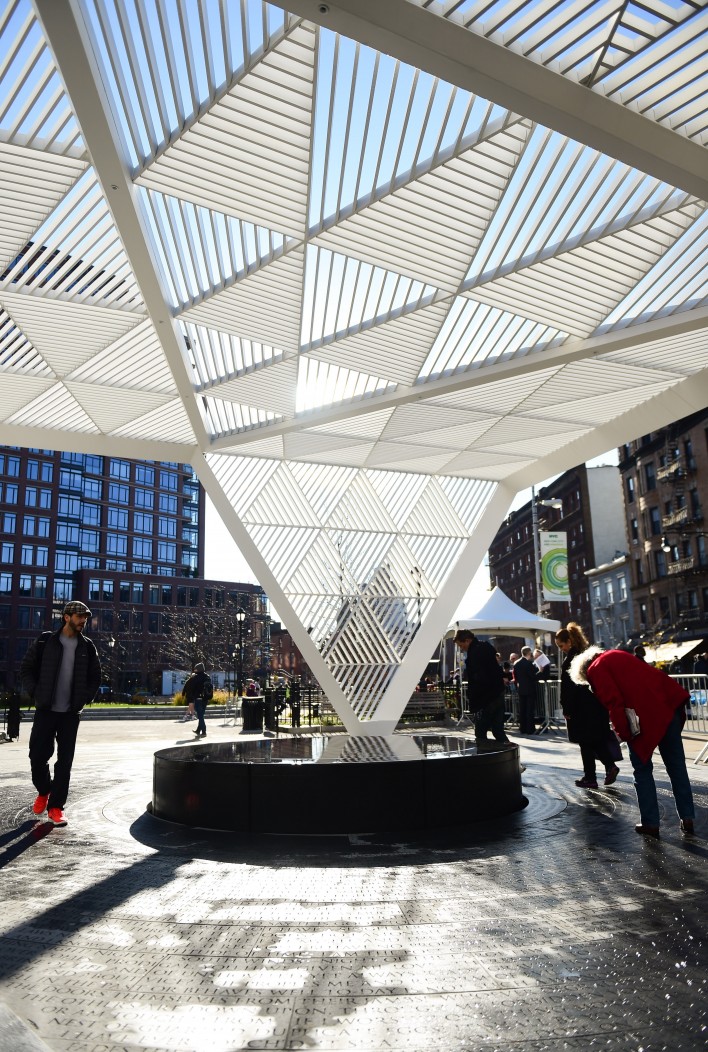 Would that include a way for the memorial to include a list of names of New Yorkers lost to the epidemic? Was that ever considered for the physical memorial?

That would be an opportunity where you could upload a photo or share a narrative about someone you lost. We are also looking for ways, maybe on the website, maybe an ongoing opportunity to just list friends and loved ones who died. Obviously, we thought about that hard when we were designing the physical space, but there are a lot of complications. There are so many people—which is always shocking—over 100,000 just from New York. When I say that number to people who weren’t in the trenches and fighting the epidemic in the ’80s and ’90s, they’re shocked. There’s also the fact that it’s such a fuzzy list because there was so much shame and stigma—even now—about how people get listed when they die of AIDS-related complications. For me, I wouldn’t want to pretend to have a comprehensive list.

How did you arrive at the idea of engraving selections of the Walt Whitman poem “Song of Myself”—did that come from the names dialogue?

We really put that in the hands of the visual artist Jenny Holzer. Our board put together a brief about what our goals were for a human memorial. We wanted something that was universal. AIDS impacted so many different communities and for so long—we didn’t want to get trapped in a gay male history of AIDS. But also, we wanted it to be something that had emotional permanence. This memorial is something that will be part of the New York City landscape hopefully for hundreds of years. And we will conquer AIDS at some point, so the meaning of the memorial will change over the years. So we wanted something that would still have as much emotional power and resonance in 50 or 100 years as it does now. Jenny Holzer probably could have found something contemporary that would have met that criterion—and I’m speculating—someone like [artist and activist] David Wojnarowicz who has lots of writing on this topic, but one of the ways to tell if something is going to have emotional resonance after 150 years is to look at something that already does. 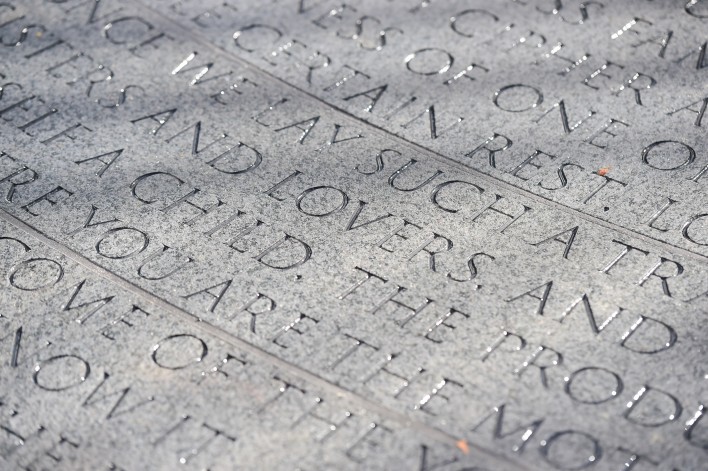 Why do you think Whitman resonates so well?

Whitman is one of the gay forefathers of the United States, and when I read [this poem], it’s spiritual without being religious. And partly that’s because it’s a voice from the past, a knowing fatherly voice. It works well. And he wrote it after a time of great loss in this country, after the Civil War, after so many men had been butchered in battle and there was so much loss and contemplation of moving on. And he writes it from so many different perspectives. He speaks as a woman, a man, an old person, a young person, as a living person and a dead person, so it captures that multiplicity of perspectives we wanted in whatever got selected. We did interviews with different artists, and we went with Jenny Holzer and then gave her artistic freedom to work within the brief we gave her to come up with a selection. I think she did a great job. We were universally happy with it.

What drew you to this project in the first place? What’s your connection to the AIDS epidemic?

It was really my lack of connection to the AIDS epidemic. I was born in late 1981, so I always lived in a world with AIDS. I grew up learning about HIV, really, from an epidemiological standpoint, like in high school health class: how not to contract HIV. But I learned nothing—zero!—of the social and cultural impact of the disease. When I moved to New York City in my young 20s, I considered myself a pretty politically and culturally engaged person—I would go to museums and read the newspaper—but it wasn’t until I picked up And the Band Played On [the 1987 AIDS book by journalist Randy Shilts] from a former boyfriend’s shelf in 2009 that I realized how ignorant I was. I was floored reading it. I was angry. I’m not religious and my family is half-Jewish, so I’ve always grown up with age-appropriate books about engaging with the Holocaust, fiction and nonfiction—not that you have to be Jewish to learn about the Holocaust—but I understood how it connected to my life and family and community. So when I read And the Band Played On, I just could not wrap my head around the fact that I knew so little about this history that not only decimated my community, but it hadn’t even been that long ago—within my lifetime. Of course, [the epidemic’s toll] is still ongoing, both in the United States and globally. 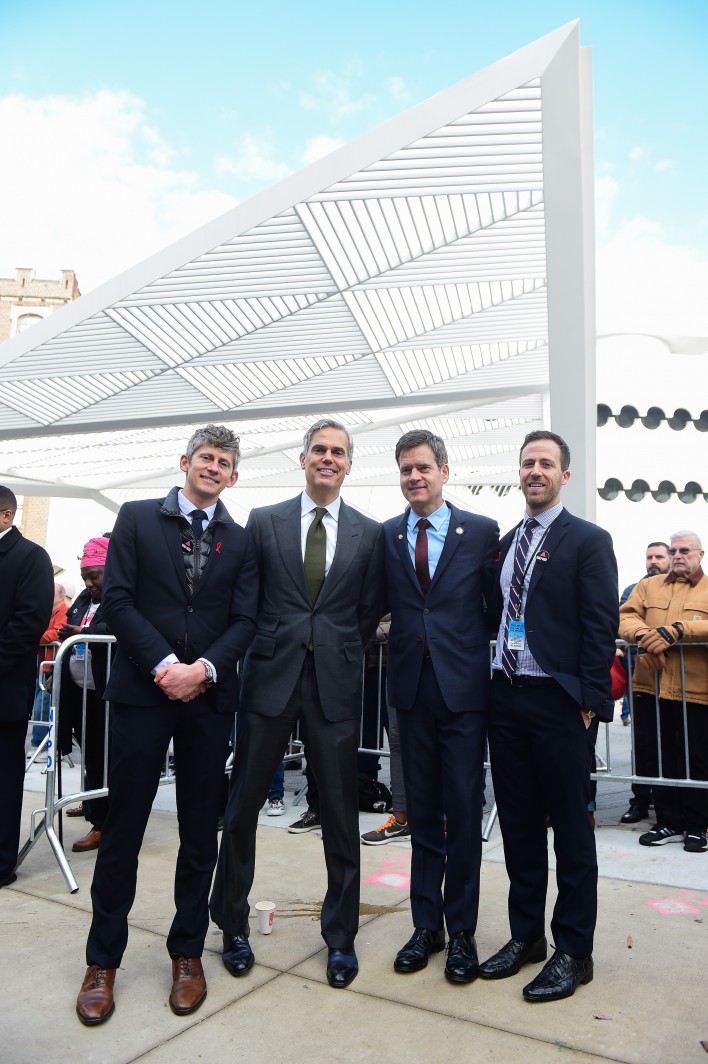 So it was out of ignorance [that] I started to talk to friends and colleagues, and I found that the ignorance was pervasive. I had a conversation with Paul Kelterborn, a friend, who became the cofounder. He had a similar story. He has a lot of slightly older friends, or a generation above, whom he would vacation with on Fire Island; and at one of the homes, there were photos on the wall of friends and former housemates who had died but no one talked about. So it came out of this idea that even the people who are most closely aligned with this—young gay men in New York—that just five or 15 years later, they’re already forgetting about it or not learning it. It’s not in textbooks. So much has happened since we started this effort: How to Survive a Plague [the documentary and book by David France], the restaging of [Larry Kramer’s] The Normal Heart [on Broadway and as a TV movie]. But when we started five or six years ago, very little was happening.

Finally, now that the structure is up, what is your favorite element of it?

One of the goals was to create a space, like a place, and not have the memorial be a sculpture that sat at the corner of a park that you just walk by. We wanted something people could go to and gather at, and I think when it’s finished, that’ll be even more apparent. The benches help create a very nice room that you are clearly in[side]; when you enter it, feels like a different space when you’re under the sculpture. There’s a central water feature to draw people in and to create an anchor in the space, so you’re entering the memorial place. For me, it really does feel like a room that invites you to contemplate or reflect. 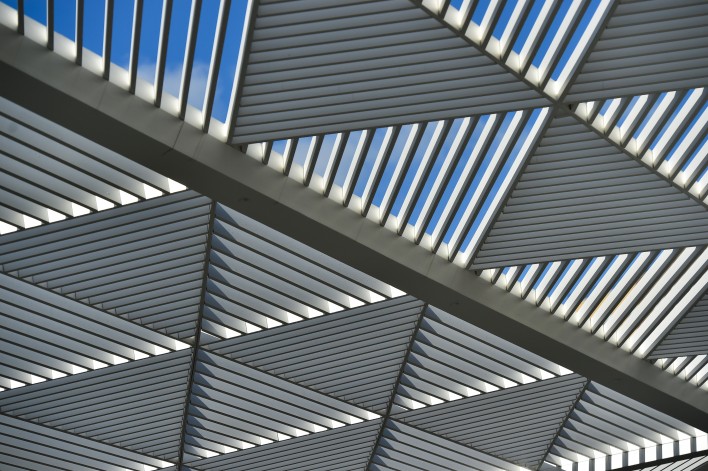 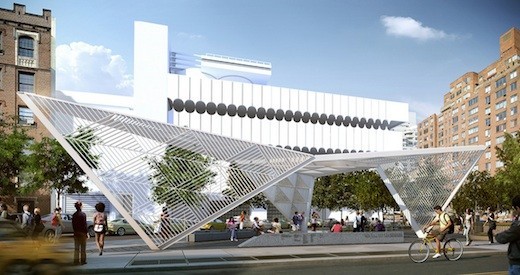 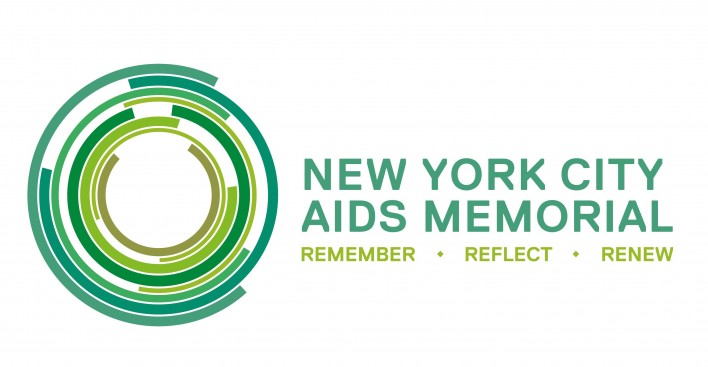