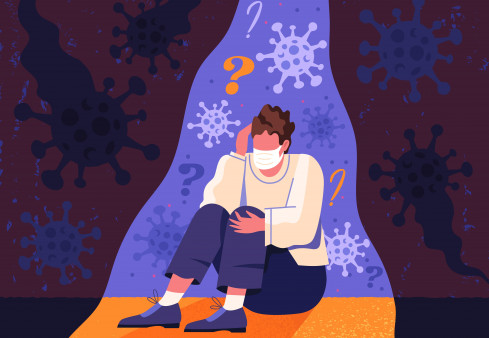 Are People Living With HIV More Prone to Long COVID?

People living with HIV may be more likely to develop long-term symptoms after SARS-CoV-2 infection—commonly known as long COVID—and this might be related to differences in immune function, according to research published in the October 1 edition of AIDS.

The study, conducted by Michael Peluso, MD, of the University of California San Francisco (UCSF), and a team of colleagues that includes long-time HIV cure researchers Steven Deeks, MD, and Timothy Henrich, MD, found that HIV status “strongly predicted” long COVID. “There are lots of reasons why this might be the case based on what we know about the effects of HIV on health,” Peluso told POZ. However, the study has limitations—for instance, the participants had not yet received COVID vaccines—and much remains to be learned.

Since early in the pandemic, some people have reported long-term symptoms that can last months or even years after a bout of COVID-19. These include persistent shortness of breath, fatigue, cognitive problems (“brain fog”) and various symptoms that resemble those of myalgic encephalomyelitis/chronic fatigue syndrome.

Deeks and other experts discussed what we know—and don’t know—about long COVID, also known as post-acute sequelae of SARS-CoV-2 (PASC), at this year’s Conference on Retroviruses and Opportunistic Infections (CROI).

The prevalence of long COVID is unclear, due in part to widely varying definitions. For example, some studies look for symptoms several weeks after infection, but some people later recover and do not develop long-term illness. Estimates range from the single digits to around 20% to nearly half. But even using the lower estimates, so many people have had COVID that this still represents a large number.

The causes of post-acute COVID symptoms, and the risk factors that make some people more susceptible, are not well understood. Hypotheses include lingering organ damage after severe illness, persistent SARS-CoV-2 infection, reactivation of coexisting pathogens (such as Epstein-Barr virus or cytomegalovirus) and lasting immune system changes leading to chronic inflammation or autoimmunity. It’s likely that long COVID is a collection of multiple conditions, and there might be different treatments for all of them, Deeks said.

Peluso and his team aimed to learn more about the long-term clinical and immunologic consequences of SARS-CoV-2 infection in people living with HIV. While early studies did not show differences in COVID incidence or severity of acute illness in people with HIV, later research suggested that HIV-positive people—especially those with a detectable viral load or a low CD4 T-cell count—may have worse outcomes.

This study included 39 HIV-positive people and 43 HIV-negative people recovering from COVID-19 who enrolled in the LIINC (Long-term Impact of Infection with Novel Coronavirus) cohort (NCT04362150), which runs parallel to UCSF’s ongoing SCOPE HIV cohort. They were diagnosed with COVID between April and December 2020, and none had received COVID vaccines.

The researchers compared symptoms and measured SARS-CoV-2-specific humoral and cellular immune responses in people with and without HIV. Humoral immunity refers to antibody response while cellular immunity includes B-cell and T-cell responses. PASC was defined as symptoms that were not present before COVID and lasted more than six weeks after infection. The analysis was done a median of about four months after COVID onset.

Most HIV-positive participants (95%) were men, and the median age was 54 years; white, Black and Latino people were well represented. They were all on antiretroviral therapy, most had an undetectable viral load and the median CD4 count was approximately 600. HIV-negative participants were matched by sex, age and COVID history. Just 10% of HIV-positive people and 17% of HIV-negative people had been hospitalized during acute COVID; one person in each group required mechanical ventilation. People with HIV were more likely to have various comorbidities, including heart disease, lung disease and recently treated cancer.

Overall, people with HIV were about four times more likely to have any long COVID symptoms and nearly three times more likely to report three or more symptoms. Several of the most common symptoms were at least twice as frequent in HIV-positive people compared with HIV-negative people, including fatigue (42% versus 23%), concentration problems (42% versus 19%), trouble sleeping (34% versus 16%), headache (24% versus 12%), muscle pain (24% versus 12%), joint pain (21% versus 7%) and vision problems (21% versus 7%).

HIV-positive people and well-matched HIV-negative people had “broadly similar SARS-CoV-2 antibody and T-cell responses,” and these did not correlate with long COVID symptoms, the researchers reported. This is consistent with previous studies showing that people with well-controlled HIV have adequate antibody responses after SARS-CoV-2 infection and generally respond well to vaccines.

People with HIV also had higher levels of certain inflammatory cytokines (IL-6, TNF-alpha and IP-10), and these were associated with persistent COVID symptoms.

“We observed that HIV status was strongly associated with PASC, raising concerns that this condition might be common among people with HIV recovering from COVID-19,” the study authors wrote. “Higher levels of inflammation were associated with PASC. Finally, we observed differences in SARS-CoV-2- specific CD4+ and CD8+ T cells that might have implications for long-term immunity conferred by natural infection.”

“HIV status strongly predicted the presence of PASC,” they concluded. “Larger and more detailed studies of PASC in people with HIV are urgently needed.”

Indeed, research on this topic is scarce. One study found that among people treated at the emergency department or hospitalized with acute COVID at Weill Cornell Medical Center in New York City near the start of the pandemic, women, people who needed mechanical ventilation and people with HIV were significantly more likely to report persistent symptoms a year later. An observational study in India found that 11% of people with HIV, most of whom had asymptomatic or mild COVID, had persistent symptoms four months later. (This study reported a long COVID prevalence of 44%, but that was one month post-infection, which most researchers think is too soon). Peluso’s team has a preprint study showing that recent Epstein-Barr reactivation and pre-existing HIV are associated with long COVID. Another paper coauthored by Peluso suggests that people with HIV may be more vulnerable to the central nervous system effects of COVID.

The present study has some important limitations. In addition to its small size, it did not include people who were vaccinated against COVID or those who contracted SARS-CoV-2 during the delta or omicron waves, so it does not reflect the current state of the pandemic. Studies have shown that vaccination reduces the risk for long COVID, but it is not clear by how much. This analysis also did not include people with poorly controlled HIV or low CD4 counts.

Speculating about the reasons for elevated long COVID risk in people with HIV, the study authors note that HIV-positive people have higher rates of comorbidities and socioeconomic factors associated with worse COVID outcomes. There have been several reports of persistent SARS-CoV-2 infection in immunocompromised people, including some with advanced HIV. What’s more, long COVID may be driven in part by ongoing inflammation and cardiovascular dysfunction, and people with HIV are already prone to persistent immune dysregulation and chronic inflammation. Higher rates of long COVID among people with HIV “may not be too surprising,” Deeks said at CROI, given that even when they are on long-term antiretroviral therapy, HIV-positive people “don’t handle pathogens perfectly and have persistent inflammation.”

These and other studies of COVID in people with HIV underscore the importance of prompt antiretroviral treatment, which preserves immune function and may reduce (if not eliminate) chronic inflammation. Deeks said the evidence to date also suggests that treating acute COVID aggressively with antibodies and antivirals could limit SARS-CoV-2 viral load and thereby substantially reduce long-term complications. More limited evidence raises the possibility that antiviral treatment or vaccination also might help people who already have long COVID.