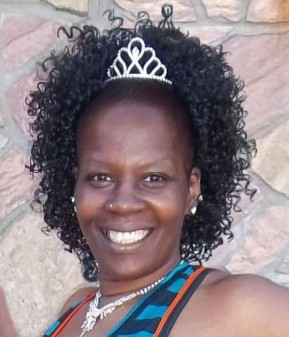 Latonya Baskerville stands out in a crowd. She’s 6 feet tall and dark-skinned, with a tiara perched atop her head. “It’s part of my identity!” she exclaims. “Swiping my ATM card or using my food stamps, I wear it every day. I see a reflection of myself, and I’m reminded I’m God’s child and don’t have to be subjected to other people.”

The 47-year-old Brooklyn native wasn’t always so confident. Growing up, Baskerville was bullied and teased because of her physical features. “Before I knew it,” she recalls, “I had fallen into a dark hole, indulging in crime, sex and drugs to gain acceptance.”

In 1998, while six months pregnant, Baskerville learned she had HIV. When doctors told her about antiretrovirals that could keep the baby negative, she forced herself to take 14 pills a day, despite her drug addiction, and it paid off: The baby was born HIV-free.

Baskerville, however, lost custody of her three children. Busted selling drugs to an undercover cop near a school—it was her first offense—she was given the choice of rehab or prison. She chose to quit drugs. And she did, even winning back her kids (she’s now a grandma!).

Thanks to the support of her sisters and Narcotics Anonymous, she also dealt with her HIV. “I remember at an NA meeting, a young lady shared from the floor that she had HIV,” Baskerville recalls. “I thought, They’re not about to hug her later. But sure enough, everybody embraced her! I was like, Wow!” In 2008, Baskerville’s CD4 count dropped to nearly 350, so she started treatment. Since 2009, she has been undetectable.

But the HIV affected her self-esteem. “I had a great fear of being alone,” she recalls, “and so would accept anybody—I got bamboozled by two people!” Eventually, she decided to put herself first. She remained drug-free, started exercising—losing 139 pounds—and wrote a novel, No Matter What, based on her life experiences, including HIV.

She also founded the nonprofit Training Individuals Make Better Attitudes Inc., which teaches, among other things, HIV education and disclosure tactics. For the female participants, Baskerville has crafted a special tiara-themed treat: “I’m putting crowns on them,” she says, “to remind them they are princesses!”

To read more about Baskerville and other POZ Stories or to tell your own tale of empowerment, visit poz.com/stories.