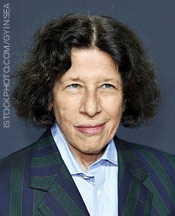 “After AIDS, I think that [gay] people were afraid of a kind of official response to AIDS, like they would be arrested…so [to protect themselves] they made up a lie: ‘We’re just like you. We just want to get married and have children.’”

We’re always on board for the wit and wisdom of humorist Fran Lebowitz, but did this quote go overboard? It’s from a must-read 2012 interview in The Awl, in which she links the promiscuity of the ’70s with the AIDS epidemic and the eventual acceptance of homosexuality and marriage equality. She also opines that the “lie” of the ’80s has become the truth of today. “Now gays are just like straight people…. To see all these gay people with children, I can’t get over it. I think, ‘It’s unbelievable that you will do this when you don’t have to.’"