A detail from the documentary’s poster; click to watch the film’s trailer. Courtesy of Kino Lorber / Video: YouTube/KinoLorber

Plus: Watch a free virtual Q&A about the documentary, “Wojnarowicz: F**k You F*ggot F**ker.”

David Wojnarowicz’s art and AIDS activism continue to inspire and inflame. The multitalented provocateur died in 1992, at age 37, of HIV/AIDS complications, but as the new documentary Wojnarowicz: F**k You F*ggot F**ker attests, there’s still much to learn about this queer writer, painter and photographer who was also an active member of the New York chapter of ACT UP (AIDS Coalition to Unleash Power).

The movie is now playing at virtual cinemas, and the Manhattan-based theater Film Forum will host a live, free virtual Q&A with director Chris McKim and editor Dave Stanke. Moderated by queer Latino activist and filmmaker Leo Herrera, the Film Forum discussion takes place at 7 p.m. ET, Tuesday, March 30. You can RSVP for the Zoom Q&A here or watch it on the Film Forum YouTube channel. (Watch the trailer for the documentary at the top of this article.) 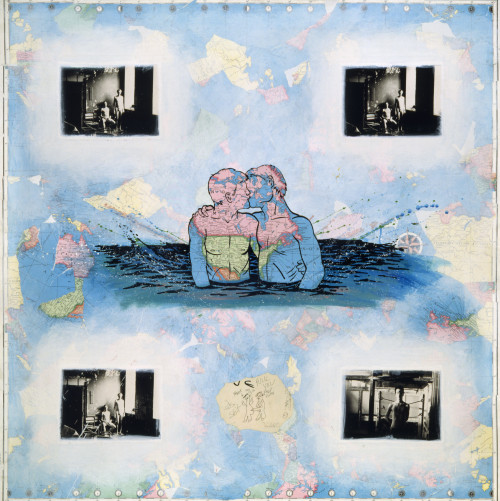 Kino Lorber, which distributes the film, offers this synopsis:

Wojnarowicz: F**k You F*ggot F**ker is a fiery and urgent documentary portrait of downtown New York City artist, writer, photographer and activist David Wojnarowicz. As New York City became the epicenter of the AIDS epidemic in the 1980s, Wojnarowicz weaponized his work and waged war against the establishment’s indifference to the plague until his death from it in 1992 at the age of 37.

Exclusive access to his breathtaking body of work—including paintings, journals and films—reveals how Wojnarowicz emptied his life into his art and activism. Rediscovered answering machine tape recordings and intimate recollections from Fran Lebowitz, Gracie Mansion, Peter Hujar and other friends and family help present a stirring portrait of this fiercely political, unapologetically queer artist.

Regular POZ readers, AIDS advocates and art lovers are certainly already familiar with Wojnarowicz’s work, which has been exhibited more broadly in recent years, garnering a new generation of fans.

Richard Brody of The New Yorker called WOJNAROWICZ “deeply moving” and named it one of the best movies of the year! See...

In 2018, the Whitney Museum hosted the survey exhibition David Wojnarowicz: History Keeps Me Awake at Night. For more, including a slideshow of his art, read “Why ACT UP Protested an Exhibition of ACT UP Artist David Wojnarowicz’s Work.”