For a challenging exercise regimen that will keep you cycling, try spinning.

How does exercise benefit people living with HIV? Let us count the ways. No, let’s not—you’ve heard them before. The hard part is keeping at it; the trick is to find an exercise you enjoy and want to do again.

That’s what Richard Cordova discovered five years after his 2002 HIV diagnosis. “I finally realized,” he says, “that I had to ditch destructive habits for something that would help me live. So I replaced party drugs with exercise that I enjoyed and looked forward to.” And he never looked back.

Cordova, 31, a health educator at Center on Halsted, an LGBT community center in Chicago, also works as a spinning instructor. His favorite part? “It’s exhilarating. I get a real high from the intensity, and I feel strong.” Read on to learn Cordova’s tips for spinners-to-be.

THE BASICS
Spinning is an indoor cycling program led by an instructor. It simulates riding on outdoor terrain (but without the dangers and distractions of traffic—not to mention helmet hair). You cycle on a  special bike (different from a stationary bike) at varying angles, sometimes standing to pedal, moving back and forth to music.

CLASS ACT
While instructional DVDs are available, the equipment is too expensive for most home gyms. Many sports club fees cover three introductory classes.
MUST HAVE
Bring a water bottle and a towel. Loose workout clothing is fine—best in a fabric that wicks away sweat.
BEGINNER’S LUCK
Don’t judge spinning until you’ve attended at least three classes. Midway through your first class you may think, “I’m dying right now!” Your body has to get used to the intensity. (And don’t forget: You can adjust the resistance level on the bike as needed.)
EXPERT ADVICE
Focus on breathing—in through the nose, out through the mouth. Slow, steady breaths provide a consistent supply of oxygen to muscles and a lift to your spirits. If you can keep your breathing slower than your leg speed, you’re golden.

BUTTS ABOUT IT
If your behind hurts after several classes, try a gel pad seat cover, available for about $20. (We found one at derri-air.com.)

TO THE LIMIT
You know you’ve hit your wall when you feel you’re about to throw up. That’s how your body stops you from pushing it too far.

VIRAL SPIN
“I find it important not to let HIV keep me from doing the same things negative people do,” Cordova says. “From spinning, I get a stronger, healthier body, one that can help fight the virus. I also gain the mental fortitude to know that I am stronger than HIV!” 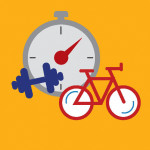 How Do I Start an Exercise Program? 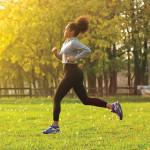 Fitness Is a Frame of Mind