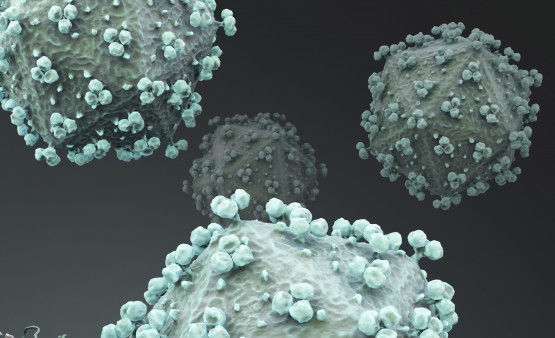 Very early treatment is linked to a smaller viral reservoir, but blocking IL-10 and PD-1 might control the virus even in those with chronic infection.

Starting antiretroviral therapy very early, before extensive immune system damage occurs, improves the prospects for a functional cure, according to research presented at the 11th International AIDS Society Conference on HIV Science (IAS 2021). But most people with HIV are diagnosed and start treatment later, during chronic infection. Another study found that a combination of antibodies that block interleukin 10 and PD-1 may help control the virus without antiretrovirals even at this later stage.

Very soon after initial infection, HIV establishes a lasting reservoir of inactive virus in long-lived resting T-cells. While antiretroviral medications can control viral replication, they do not eliminate these latent viral blueprints, which can resume virus production when treatment stops—a key barrier to curing HIV.

Edwina Wright, MBBS, PhD, of the University of Melbourne in Australia, and colleagues evaluated the association between CD4 T-cell counts and viral reservoir size in people who started treatment early in the START (Strategic Timing of Antiretroviral Treatment) trial. As previously reported, START showed that people who initiate treatment with a CD4 count above 500 have a lower risk of illness and death than those who wait until it falls below 350.

The findings indicate that with people who maintain a CD4 level of at least 800 before treatment “are endowed with an enhanced capacity to eliminate latently infected cells and may constitute a subgroup that could potentially benefit from interventional cure studies,” the researchers concluded.

In another study, Brian Moldt of Gilead Sciences and colleagues compared viral reservoir size and diversity, as well as HIV susceptibility to the experimental broadly neutralizing antibody elipovimab (formerly GS-9722) in people who started antiretroviral treatment at different stages. Broadly neutralizing antibodies, currently being studied for HIV treatment and prevention, target conserved parts of the virus that change little across strains.

The study enrolled people in four cohorts based on when they started antiretrovirals: the earliest stages of infection (known as Fiebig stages I or II), when HIV antibodies are first detectable (Fiebig stages III or IV), late acute infection (three months or less) and early chronic infection (six months or less). The 64 participants had been on treatment for three to five years and had a high CD4 count.

Total DNA in T cells was lower in the two groups that started treatment earliest. The late acute group had a lower level than the early chronic group, but the difference did not reach statistical significance. People who started treatment early also had less viral diversity and greater susceptibility to elipovimab.

Finally, Caroline Passaes, PhD, of the Pasteur Institute in Paris, and colleagues assessed the effect of early antiretroviral therapy on posttreatment control, or the ability to maintain viral suppression after stopping the drugs. Dubbed pVISCONTI (“p” for primate), the study is using a monkey model to learn more about the factors underlying the viral control seen among people in the French VISCONTI cohort.

The researchers analyzed 12 monkeys with SIV (HIV’s simian cousin) that started combination therapy during primary infection (28 days after exposure), 12 that did so during chronic infection (six months postinfection) and 17 that remained untreated. After two years on treatment, the antiretrovirals were stopped.

Viral rebound (defined as a viral load above 1,000) was delayed in monkeys that started treatment during primary infection compared with chronic infection. What’s more, 82% of the monkeys in the primary infection group achieved posttreatment control (a viral load below 400), compared with 25% in the chronic infection group and just 12% in the untreated group. Anti-SIV CD8 T-cell activity, which was weak at the time of infection, increased after treatment interruption, particularly in monkeys that started therapy early, and it was stronger in posttreatment controllers.

What About Later Infection?

While researchers agree that starting antiretrovirals very early can improve the prospects for controlling HIV off treatment, that offers little help for the majority of people who start therapy later.

So Zachary Strongin, a graduate student at Emory University in Atlanta, and colleagues studied a functional cure approach that could potentially work for more people. Using a monkey model, they evaluated a combination of antibodies that block interleukin 10 (IL-10) and PD-1 in animals that started antiretrovirals during early chronic infection.

IL-10 is an anti-inflammatory cytokine that suppresses T-cell activity. Blocking IL-10 leads to decreased T-cell survival, reduced expression of inhibitory receptors and a decrease in T follicular helper cells, a subset of CD4 cells that harbor latent virus. PD-1 is an immune checkpoint that acts as a brake on CD8 T cells. PD-1 checkpoint inhibitor antibodies—widely used in cancer immunotherapy—restore T-cell activity. Both IL-10 production and PD-1 expression are elevated during treated chronic HIV or SIV infection. These inhibitory signals keep T cells in an inactive state and maintain a persistent viral reservoir. The two mechanisms appear to compensate for each other if only one is blocked, so combining them is a promising approach, Strongin said.

The researchers analyzed 28 macaque monkeys with a highly pathogenic strain of SIV that gives rise to high viral loads. Steven Deeks, MD, of the University of California at San Francisco, who was not involved in the study, noted that this is a better model of HIV in humans, as prior cure research has often used less pathogenic strains of SIV or HIV that are easier to suppress.

The monkeys started antiretroviral therapy six weeks after infection and stayed on them for more than a year. After 16 months on antiretrovirals, 10 monkeys were treated with both IL-10 and PD-1 antibodies, 10 received IL-10 antibodies only and eight received a placebo. The antibodies were administered via IV infusion every three weeks. Antiretrovirals were stopped after the first four doses and the experimental therapy was then continued on its own for up to 14 more weeks.

All the monkeys experienced viral rebound within three weeks after stopping antiretrovirals, but viral levels reached significantly lower levels in those that received IL-10 antibodies alone or with PD-1 antibodies. After the initial jump following treatment interruption, the new viral setpoint settled at around 50 copies in the dual antibody group compared with around 100,000 in the other two groups.

Nine of the 10 animals that received both antibodies experienced viral suppression below 1,000 copies at some point after viral rebound, compared with four in the IL-10 antibody only group and just one in the placebo group; some even had stable undetectable viral load. Viral levels were “remarkably low” given the highly pathogenic SIV strain, Strongin said.

None of the treated animals experienced systemic adverse events, but some had localized inflammation at mucosal sites. Strongin said a better understanding of these effects “will be critical to inform future studies.”

Combined IL-10 and PD-1 antibodies led to “sustained and robust viral control in the absence of antiretroviral therapy in a majority of the animals,” Strongin concluded, adding that the findings “hold real potential for achieving viral remission.”