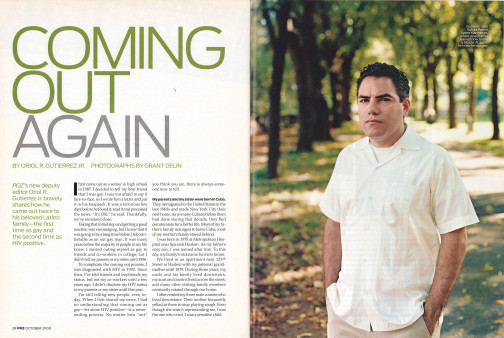 It was 10 years ago, in the October/November 2008 print issue of POZ, that I wrote my first feature story for the magazine as the new deputy editor. “Coming Out Again” was my personal story of disclosing twice to my family—first about my being gay, second about my living with HIV.

So much has changed in my life since then. Not surprisingly, on the one hand, since a decade is a long time for anyone. That said, on the other hand, I’m quite surprised at just what a ride these years have been. Despite the difficulties, telling my truth allowed me to deepen my ties with colleagues, friends and family.

As a gay Cuban American growing up in New York City, I never imagined that my story would turn out as well as it has, so far. I believe our current cover subject, Charles Sanchez, can relate. He’s from Phoenix, but Charles has lived in New York City for decades. As a gay Mexican American, he embraces all his identities, including being a person living with HIV.

Charles has combined his acting skills and activism to create a musical comedy web series titled Merce. He stars as the eponymous main character, who is HIV positive and has a lust for life. The first season of the web series was so well received that Charles was able to raise enough funding to film a second season.

The new episodes include cameos from HIV activists like Shawn Decker, Damon Jabobs, Mark S. King and many others. Click here to read more about Merce the series and Charles the man, who in 2018 celebrates his 50th birthday as well as his 15th anniversary of testing HIV positive.

This issue of POZ also commemorates another anniversary: the one-year mark after Hurricane Maria hit the Caribbean. Many islands were affected, but Puerto Rico by far suffered the worst damage—and, by any measure, is still suffering greatly. In the October/November 2017 print issue, our cover story was about protecting the progress Puerto Rico had made against HIV. We finished that story long before Maria was forecast. The article posted on POZ.com just as the hurricane made landfall.

We wanted a redo, so once again, we asked POZ contributing writer Rod McCullom, who wrote the 2017 article, to find out what life is like for people living with HIV in Puerto Rico. Unfortunately, the aftermath of the hurricane has been difficult. Click here for more.

In honor of National Latinx AIDS Awareness Day, which is observed every year on October 15, this special issue of POZ spotlights the efforts of Latinos fighting HIV. Long-term survivor Jesús Guillén is another great example. After immigrating to the United States from Mexico in 1984, he tested HIV positive a year later. He has overcome many obstacles since then. In the process, he has become a POZ hero. Click here for more.

To mark Veterans Day, which is observed annually on November 11, our POZ Q&A in this issue highlights the work of OutServe-SLDN, a nationwide network of LGBT military personnel. We spoke with the organization’s legal director, Peter Perkowski. Click here to read about the group’s participation in lawsuits defending service members living with HIV who are facing discharges because of Trump administration policies.