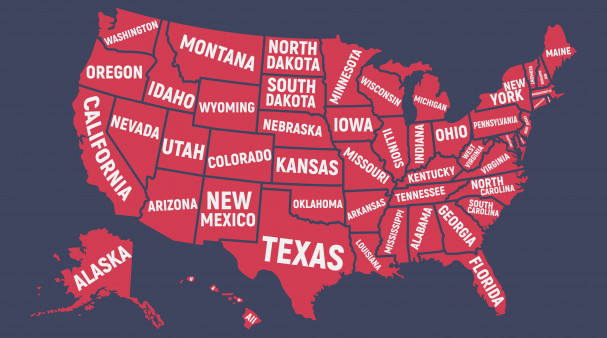 Looking at 11 years of HIV data in the United States, researchers found that “the U.S. South, particularly the U.S. Deep South, experiences a disproportionate burden of HIV.” For example, the nine states in the Deep South comprised 29% of the U.S. population in 2019 but accounted for nearly 44% of all new HIV diagnoses that year. That means the Deep South has the highest rate of new HIV cases. It also experiences the highest rate of HIV-related deaths.

The data are compiled in “HIV in the U.S. Deep South: Trends From 2008–2019,” a 24-page report created by the Southern AIDS Coalition, the Center for Health Policy and Inequalities Research at Duke University and the Duke Global Health Institute.

ICYMI: On #SHAAD, we announced the new trends report with our partners @DukeCHPIR! Read more about how we’re coming together to share data & bring more Southern community voices to the national level.

Below are two graphics from the report that illustrate overall trends in HIV diagnoses, comparing regions and Deep South states: 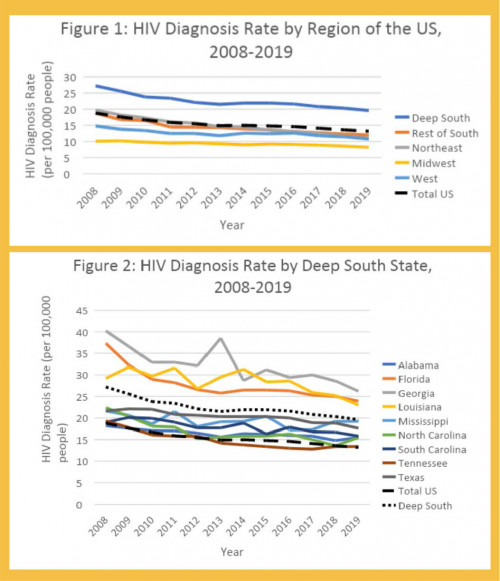 Graphs from the new report “HIV in th Deep South”Courtesy of SouthernAIDSCoalition.org

The report was released to coincide with the third annual Southern HIV/AIDS Awareness Day (SHAAD), held each August 20. This year’s theme—Support, Act, Change—paid homage to 20 years of service from the Southern AIDS Coalition.

In the report’s executive summary, the authors offer these nine top-line results:

Elsewhere in the report, the authors point out that among individual states in the Deep South, Georgia had the highest rate of new HIV diagnoses (26.2 per 100,000 people) followed by Florida (23.9) and Louisiana (23.0). 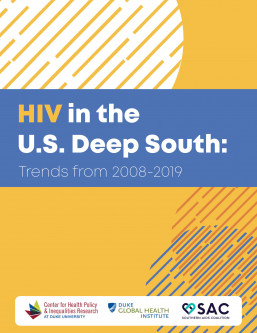 And yet, all is not bleak. For example, although the region leads the nation in new HIV diagnoses, the South saw a regular decrease in new HIV rates from 2008 to 2019. In fact, each of the four U.S. regions saw a downward trend.

“This report documents the most currently available data on HIV epidemiology and describes related sociodemographic, financial and health-related factors that influence the disproportionate burden of HIV in the Deep South,” said Susan Reif, PhD, MS, a Duke University research associate and author of the report, in a press release from the Southern AIDS Coalition.

Reif continued: “To successfully respond to Ending the HIV Epidemic goals by targeting funding and creating and implementing effective HIV prevention and care programs, it is critical to document current HIV epidemiological trends and better understand predisposing and associated influences in the U.S. Deep South.”

We need your voice by THIS FRIDAY, 8/27!! The White House Office of National AIDS Policy is seeking Southern voices for a short, 10-minute survey on HIV in the South. You can also join group sessions

As the federal government prepares to update the HIV National Strategic Plan: A Roadmap to End the Epidemic, the Southern AIDS Coalition wants to ensure that Southern voices are included. You can offer your insights on the national plan by taking a 15-minute survey here—but hurry, the deadline is Friday, August 27.