Full 48-week results comparing dolutegravir plus lamivudine with a three-drug combo were presented at the International AIDS Conference.

ViiV Healthcare’s experimental two-drug regimen of dolutegravir (sold separately as Tivicay) plus lamivudine (sold alone as Epivir) suppressed HIV as effectively as a three-drug regimen of Tivicay plus tenofovir disoproxil fumarate/emtricitabine (the drugs in Truvada) in an ongoing advanced trial. None of the participants developed drug resistance after one year of treatment.

ViiV intends to seek Food and Drug Administration approval for a fixed-dose combination tablet of dolutegravir plus lamivudine later this year.

[Editor’s note: this combination, known as Dovato, was approved on April 8, 2019]

The viral suppression results were broadly consistent regardless of participants’ initial viral load, specifically when the study authors stratified their analysis based on whether individuals began the study with a viral load greater than 100,000 or a viral load of 100,000 or less.

All the study arms saw a 1 percent or smaller rate of virologic failure. None of the participants who experienced virologic failure developed drug resistance based on the medications they received in the study. 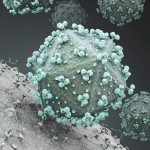