AIDS leaders gathered in person and virtually June 5 at the National AIDS Memorial Grove in San Francisco for a ceremony marking 40 years of the HIV epidemic; they honored the nearly 1.2 million Americans living with HIV today and the more than 700,000 who have died of AIDS-related illness in the United States.

A virtual component of the program included a National AIDS Memorial short film honoring HIV long-term survivors. Fauci, a pioneering HIV researcher, introduced the film, which you can watch below:

In a National AIDS Memorial press release, Speaker Pelosi, who represents the district that includes San Francisco and who has championed AIDS causes since the beginning of the epidemic, stated: “On this solemn day, 40 years since the discovery of HIV/AIDS, Americans pay tribute to the hundreds of thousands of Americans we have lost to this vicious disease and draw strength from the more than 1 million courageous survivors living with HIV today. Moved by the beauty of the Grove and power of the Quilt, this morning we again renewed our vow to finally defeat the scourge of AIDS and bring hope and healing to all those affected. Thanks to the tireless leadership of activists, survivors, scientists and the LGBTQ community, we will not relent until we banish HIV to the dustbin of history and achieve an AIDS-free generation.”

The commemoration also included a virtual speech by California Governor Gavin Newsom was livestreamed and can be watched on YouTube and at AIDSMemorial.org as well as in the video at the top of this article. The AIDS Memorial website also includes a slideshow of images of the day.

“These stories and this important observance highlight the issues our nation faced in the past year—a raging pandemic with hundreds of thousands of lives lost, social injustice, health inequity, stigma, bigotry and fear,” said Cunningham. “However, these are also the same issues faced throughout four decades of the AIDS pandemic. They are reasons why today, we have a National AIDS Memorial and why, as a nation, we have much more work to do in the fight for a just future, where HIV/AIDS no longer exists.” 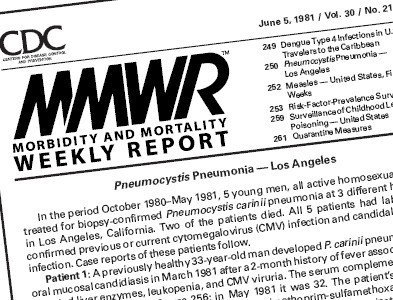 This June 5, 1981, publication includes the first AIDS cases reported in the United States.CDC

Many advocates and historians consider June 5, 1981, to be the beginning of the HIV epidemic. That’s the publication date of the first report about the condition that came to be known as AIDS. The article appeared in the Centers for Disease Control and Prevention’s Morbidity and Mortality Weekly Report and described five previously healthy young men (described as homosexuals) in Los Angeles who had Pneumocystis carinii pneumonia (PCP). After the article was published, more cases were reported in other cities.

In related news, the AIDS Memorial Quilt—all 50,000 panels—moved from Atlanta to San Francisco last year when the National AIDS Memorial took over as its caretaker. Also in 2020, the National AIDS Memorial launched a storytelling web platform titled 2020/40 that collects stories from four decades of HIV. For more details, see “Watch 40 Years of Personal Stories From the AIDS Epidemic.” For a POZ interview with National AIDS Memorial executive director John Cunningham, see “Healing Through Remembrance.” Last spring, he penned an opinion piece about adapting the lessons of AIDS to fight COVID-19 titled “Through Darkness, We Must Always See the Light.”

Yes, I was a teenager.