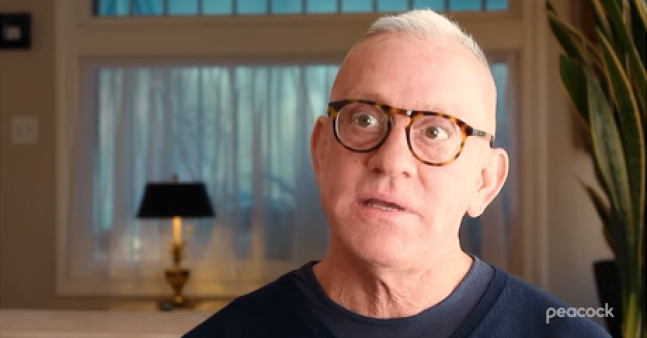 Click to watch the trailer for “Right to Try,“ starring Jeffrey Drew. YouTube/Peacock

The documentary short “Right to Try” follows Jeffrey Drew as he participates in an experimental and controversial treatment to cure HIV.

If you need a break from year-end gatherings and anxiety-inducing headlines (and who doesn’t?), here’s an inspiring diversion: the documentary short Right to Try, about Jeffrey Drew. Diagnosed with HIV in 1987, Drew stopped taking his lifesaving meds nearly two years ago to start an experimental treatment to cure HIV.

Directed by Zeb Newman and produced by Octavia Spencer, the film is available for free on the Peacock app and at PeacockTV.com. (You can watch the trailer at the top of this article.) Although Right to Try runs less than half an hour, its subject leaves a lasting impression as well as raises a number of questions.

“The possibility of curing myself of HIV was never my intention going into this,” Drew told The Queer Review in an interview before the film’s August 2021 debut at Outfest, an LGBTQ film festival in Los Angeles (you can watch the interview below). Drew, a long-term survivor, clarified that his goal was to participate in a greater cause, to help HIV researchers attain data that, even if they don’t benefit him personally, may one day be useful in developing a cure for others. As he says in the film: “Gathering information for these people is my small way of, hopefully, finding a cure.”

Details of the cure experiment—for example, which specific drugs and regimens were used and who is conducting the experiment—are not revealed during the film. It seems, however, that the treatment is modeled after the stem cell transplant that cured Timothy Ray Brown, aka “the Berlin Patient”—albeit without wiping out the immune system as was necessary in his case.

Brown, who died in 2020 after a recurrence of leukemia, was the first person ever cured of HIV. In Brown’s obituary, POZ summed up Brown’s path to an HIV cure:

An avid traveler, Brown was living in Berlin when he was diagnosed with HIV in 1995. He was on antiretroviral treatment with well-controlled HIV when he was diagnosed with acute myeloid leukemia in 2006, which would require two bone marrow transplants. His hematologist, Gero Hütter, MD…had the idea to use stem cells from a donor with a rare genetic mutation known as CCR5-delta32 that blocks HIV from entering cells.

After the bone marrow transplants led to sustained HIV remission, Brown’s case was described in a poster at the 2008 Conference on Retroviruses and Opportunistic Infections (CROI) and written up in medical journals but received little attention outside the field. Brown moved back to the United States in 2010, and in June 2011, he went public with his identity as the Berlin Patient in a POZ cover story.

But again, the lack of details on the experimental treatment featured in Right to Try makes it difficult to draw conclusions. Another possibility is that the experiment is similar to adoptive cell immunotherapy for cancer. Instead of acting against cancer cells directly, immunotherapy helps the immune system find and attack cancer cells.

To be clear, Drew is not participating in a clinical trial, but rather an unorthodox experiment. However, the film points out, if the results are promising they’ll be presented to the Food and Drug Administration and researchers, who could launch a proper clinical trial with more participants. The documentary likely gets its name from the Right to Try Act, a law that allows patients to request access to investigational treatments if currently available meds aren’t effectively treating their condition, explains David Hardy, MD, an infectious disease expert, in the documentary.

The film’s use of the Right to Try Act is problematic, counters the Treatment Action Group (TAG), a policy think tank focused on fighting HIV, tuberculosis and hepatitis C. In a TAG article that raises alarms about the Right to Try documentary and the experiment it covers, TAG writes:

“This appears to be a misrepresentation of the Right to Try law, which requires that ‘a Phase 1 clinical trial has been completed’ for an intervention to be eligible for administration under the law. California’s State Right to Try law has the same requirement. Representatives of Enochian Biosciences, the biotech company commercially developing the intervention, have also stated it was not given under right to try law. The film’s title is therefore also likely a misrepresentation. W. David Hardy is listed as a ‘Scientific and Medical Advisor’ to the Seraph Research Institute, which led the experiment, seemingly contradicting the film’s statement that ‘the doctors and scientists conducting the experiment declined to speak on camera.…’”

What’s more, TAG offers details on the experiment conducted in the film:

“The intervention administered to Jeffrey Drew was developed by Dr. Serhat Gumrukcu who is affiliated with (and apparently a founder of) both Seraph Medical and the Seraph Research Institute in Los Angeles. Gumrukcu is also ‘inventor and co-founder’ of Enochian Biosciences, the company commercially developing the approach (according to a disclosure slide, Gumrukcu receives a salary from the company and owns stock). Online searches reveal evidence that Gumrukcu has both prior criminal (see here and associated sentencing transcript) and civil court judgments against him.”

How did the treatment turn out for Drew? Side effects hit him hard and ranged from fevers and chills to vomiting and fecal incontinence. He took a hiatus from work and remained homebound. Eventually, his body acclimated, and he resumed his activities—for example, he’s well known in the Los Angeles recovery scene, according to profile in Variety, and he has been a pivotal force in the AIDS fundraising event Best in Drag Show.

Footage from the drag show over the years is woven into the documentary, as are interviews with HIV litigation lawyers and testimony from the 2019 congressional hearings on the pricing of HIV prevention drug Truvada.

The clips from the lawyers and the hearings bolster Drew’s mistrust of big pharmaceutical companies, which, he says, benefit in the billions from HIV treatments they don’t make available to those who need them most. In part, it’s this viewpoint that inspired him to participate in an unorthodox experiment, one that isn’t associated with big pharma.

So, is Drew cured? Alas, research and science rarely offer quick and simple happy endings. What’s more, this particular research project, like so many in the past two years, ran into unforeseen challenges as the COVID-19 pandemic unfolded.

However, in speaking about the film during Outfest, Drew stated that he is undetectable and not taking antiretrovirals. “I’m not on medications, and I have no viral load,” he said, before offering an important caveat: “But that doesn’t mean I’m cured of HIV.”

More research is needed before such a declaration can be made. For example, scientists will measure whether HIV is hiding in Drew’s body.

Whatever the outcome, Drew certainly played his part—in the lab and in front of the camera.