2017 Update on the New Medications 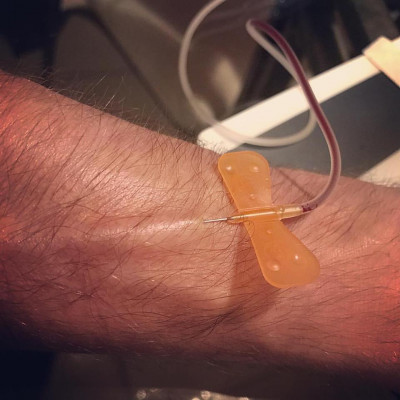 As you may recall back in December, I set out on a new journey to better my overall well being, lifestyle and treatment regimens for my chronic illnesses. First and foremost, I began by seeking new therapies for my Hemophilia treatment. Having been on the former treatment for 14 years, I was horribly overdue for a fresh set of eyes on my case.

I’m happy to report since I started Adynovate in December, I haven’t had any break-through bleeds, and I’m physically doing better. Though I have permanent joint damage and partial muscle atrophy, the twice a week injections are working exactly as the doctor said they would. I have noticed a slight increase in overall activity including walking, doing more around the house and being just overall more active in my day-to-day routine. I realize my case and situation isn’t everyone else’s, but I can speak now on behalf of the newer generation anti-hemophiliac factor VIII concentrates that they do work. I was skeptical, like most at first, but now seeing the results of these drugs first hand, I realize the benefit they offer. I haven’t really noticed any side effects as a result of the new treatment plan.

Also, being on a new HIV drug called Triumeq, which I began taking on December 15th, 2016, has also been part of a new overall health treatment upgrade. After a month of taking just one pill a day, from my previous 5 pills a day, I officially got my lab work back this morning to see how the new drug was working in my system. View the results below.

I don’t expect everyone to understand what those results indicate, but “Not Detected” or “Undetected” status on an HIV viral load test indicates the medication is working, and my HIV is controlled to a non-readable status by modern tests. This is great news, because if the test were to show a viral load number result, that would mean the drug is ineffective and I would have to try something else. I don’t regret changing my anti-virals after 12 years to more refined and modern drugs, and the results speak for themselves.

So there you have it, a 2017 update on my overall health and well being. I’m doing wonderfully! And just a side note, I have been following up with a liver specialist at my new Hemophilia Treatment Center, and I’m undergoing two scans next month in February to see how my liver health has improved since being cured of Hepatitis C in 2014. Since I’m a hemophiliac, I cannot undergo a liver biopsy, rather a FibroScan and standard abdominal ultrasound. This will determine if I have any liver issues like fatty liver or scarring that I’ve inherited over the past 30 years of living with a HCV and liver inflammation. That’s all for now, see you soon!