Mel England and Janice Markham star in “Ron and Laura Take Back America.”

Mel England talks about his HIV diagnosis at 19, a gay midlife crisis, the Madonna generation and the mantra that got him through it all.

If you need some comic relief from this year’s election cycle—and who doesn’t?—then check out the mockumentary Ron and Laura Take Back America, which gets my vote as the best candidate to deliver funny-cause-it’s-true political hilarity. Filmed in a reality-TV, Waiting for Guffman film style, the movie follows upstanding Christian couple Ron and Laura (Mel England and Janice Markham) on their misguided quest to support John Zackey, the conservative CEO of Whole Fruits grocery stores, who has spoken out against Obamacare. Confusing matters, Laura mistakes the CEO for Bob Zackie a flamboyant celebrity fashion designer (played by Jim J. Bullock, who in real life is openly HIV positive).

Written by and staring England and Markham, the movie explodes all the tropes of today’s culture wars, topics that any POZ reader, regardless of political affiliation, will relate to. Even more close to home is England’s personal story. After the film’s trailer below, you’ll find a Q&A with England in which the gay long-term survivor talks about his journey from AIDS and addiction to midlife marriage and success on the stage and screen.

Before we talk politics and art, tell us about your AIDS journey. You’re what we consider a long-term survivor.

I seroconverted in ’89 when I was 19. At the time, they told me I had six months to live. I had been on full scholarship at NYU [New York University]. I grew up in Dallas and had worked hard to get to New York and was so excited and thrilled but then got the diagnosis. I thought, I can’t be an actor now. I stood at my window overlooking Union Square and, to be honest, would think of jumping. The media and doctors were telling me I would die. I had nothing to believe in. But I had a friend who worked in a health food store in Colorado, and she said, “Come out here; people are healing themselves.” So I moved, and that started my almost 10-year journey into alternative medicine, but really I was just staying away from AZT [an early HIV med]. Sadly, a lot of my fiends died on it, and I just didn’t want to take that medicine. Then I went back to New York in ’94, but at that point, my addiction had taken off.

Alcohol and pot and eventually cocaine. I got sick and almost died in ’97. I had AIDS and Kaposi’s sarcoma lesions all over my face and body. I was in such denial that I didn’t even think anything was wrong. But the [new combination antiretrovirals] came out at that point, so I started taking pills and started getting better—well, I had a bad experience with one drug, so it took a couple of months to get the regimen figured out.

Honestly, I wouldn’t be here today if I hadn’t gotten sober. Once I did that, I had to go through therapy to recover from the experiences of growing up a gay kid in Texas who never felt accepted.

You kept doing plays and getting work, both in New York and Los Angeles. Eventually, you starred in the indie film “Little Big Top,” about an alcoholic clown.

That came out in 2008, when I had just met Tony, who is now my husband. It’s when I also found out I had this HPV cancer [caused by human papillomavirus]. I thought that was going to be the summer of me having meetings with agents, and instead it was, Go directly to Cedars-Sinai hospital. But I got the chemo treatment, and they zapped it out of me.

What happened to me was, I had taken a little holiday from my HIV meds, and my T cells [CD4 cell count] had been down. So I learned my lesson [to keep taking meds].

Also at this time, I had been asked to do a solo show, a piece about the environment for a SUNY [State University of New York] school. Now it’s January ’09. I had told them the title—Swimming With the Polar Bears—but I hadn’t written it. I thought, How do I do a play about extinction but not deal with my own extinction? It became about my cancer story, doing chemo, having dreams of shamans and Inuit and polar bears. Then in rehearsal, I thought, How do I talk about surviving cancer but not HIV? So it became a survival story. Then it ran off-Broadway, and Al Gore signed the posters, and things exploded, so that’s when I officially started talking about HIV, in 2009.

Did you worry that would hurt your acting career?

I thought, I’ll go back to Hollywood and I’ll be the AIDS guy, but nobody really cared. I was open with friends and family, but it’s not like you put it on a résumé. I didn’t want pity or special treatment. I just wanted to be the same as everyone else—judge me on my talent and personality or whatever. But I’m at the point where I survived AIDS! Why would I be ashamed of that? It feels like one of my greatest accomplishments. And I had watched so many friends die.

What’s your take on Charlie Sheen?

I’m so happy about Charlie Sheen. Regardless of what he represents—I hope he finds his path; it’s such a hard thing—I think it’s great that we have another person coming out and saying, “I’m doing this, and I’m surviving it.”

You starred in the 2014 film “Best Day Ever,” about a gay guy turning 50 and having a midlife crisis. What drew you to that role?

When I auditioned, I was a bit younger than the character, but I connected with the role of a gay man dealing with a midlife crisis. The psychology I brought to the film was that we [long-term survivors] are all collectively having this experience; we didn’t know if we were going to live to next week much less till middle age. Regardless of whether you had HIV or were afraid of getting it, there was that period in the ’80s and early ’90s that was so terrifying. For us to now be worrying about if we’re going to get married and have 401(k)s and a house and kids, that’s great. And while the gay kids today are like, “Yay I’m gay, and I’m going to be president one day,” for those of us in the older generation, it’s like we’re still in a posttraumatic shock. So there’s a collective hangover from the experience. That film provided an opportunity to explore that in a way.

Here’s a tough question to ask an actor: How old are you?

I’m 46 now. Around the time of Best Day Ever, I was keeping my age quiet. We put gray in my hair. My friend Craig Chester said, “Well, of course you’re younger in real life than the character because nobody wants to see a real middle-aged gay man!” But because I was diagnosed at 19, at that time a lot of the guys who seroconverted were at least 10 years older than me, so that became my peer group. Some of my best friends today are still of that generation—the Studio 54 generation—while I’m the Madonna generation. It’s funny: Even though I’m 46, I feel like I’m 99. 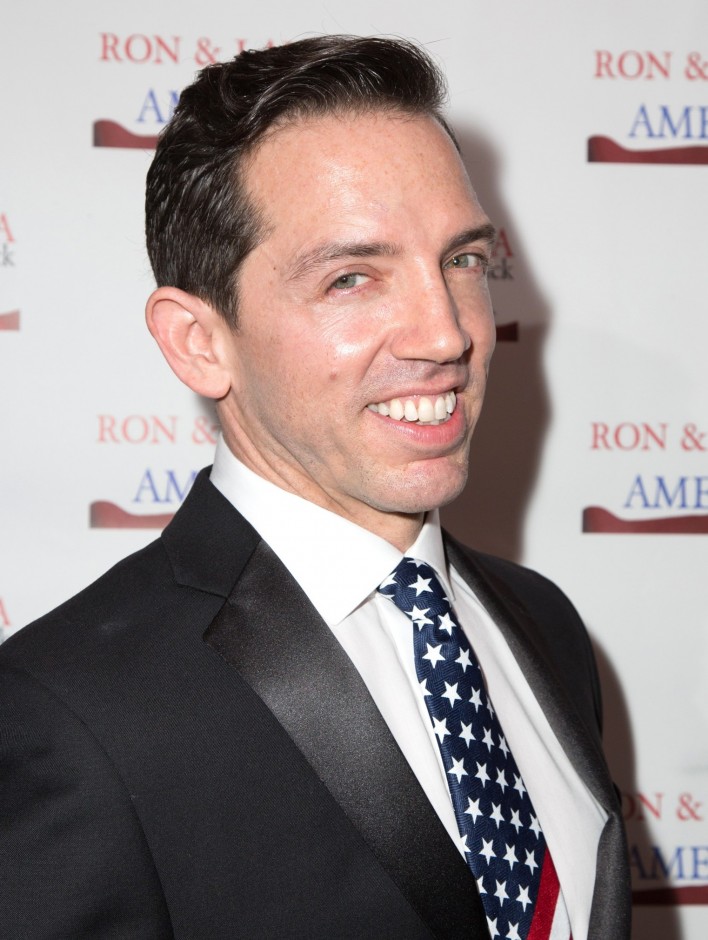 Mel England at the L.A. premiere of “Ron and Laura Take Back America.”Sheri Determan

That brings us to “Ron and Laura Take Back
America.” HIV is not explicitly in the film, though a lot of the movie revolves around health care issues that POZ readers will recognize—a whole plot point concerns the dreaded Medicare doughnut hole. What do you think POZ viewers will relate to most in the film?

Obviously, a huge portion are LGBT, and there’s a huge LGBT theme—Ron and Laura’s son is gay and wants to marry his fiancé who happens to be African American. It’s a modern-day All in the Family, so it’s really about a family coming to terms not just with their son’s sexuality, but also how their political rhetoric and even their religious beliefs divide them, and yet they still love each other. And I think this speaks to all Americans—How are we going to get through this together as a family?—because we are all connected.

Ron and Laura seem misinformed but don’t come across to me like necessarily bad people. Would you agree?

They’re confused most of the time. We also try to make fun not just of conservatives, but also the wacky liberals. [Cowriter and star] Janice shared my concern that we can make fun of these people, but at the core, we want to love them. I still love my family even if they say things that can be very hurtful to me. That’s my personal hope, that we can transcend whatever divide is being thrust at us.

Originally, it was going to be a short film. During the Obamacare debates, the CEO of Whole Foods came out against it, and there were boycotts from liberals, and then conservatives had “buycotts” to support it. Janice said, “Let’s make a short film about people who would never go to Whole Foods but who go there.” We realized very quickly we wanted this to become a feature. We started almost seven years ago. I was afraid that at any minute now the Tea Party or Obamacare debates would go away. Instead, it’s getting worse. The crazier it gets, the better it is for our movie!

Finally, any parting advice for our readers? Is there a mantra or an outlook that has served you through the years?

The one thing I learned as a young kid in Colorado is that you never know what’s going to happen. Back then, I heard Deepak Chopra on Larry King’s radio show, and he said, “I am an infinite field of potentiality.” I wrote that down on a piece of paper and pasted it by my bed, and I’d wake up and see that, and I’d chant, “I’m gonna live. I’m gonna live.” But the No. 1 thing is to never give up. Always find something to dream about. Find something you’re passionate about and focus on that.

There is so much to be hopeful for, and we’re lucky to be living in this time, but the struggle still continues. One of the reasons I felt so clearly about coming out when I did about HIV—in the play Swimming With the Polar Bears and then in Plus magazine and this interview—I just feel like we’ve got to end stigma around HIV. I mean, HIV is just another condition and we get to live with it. I’m doing whatever I can today. I want the 20-year-old who’s at NYU and studying acting and maybe seroconverts today to not have to worry or think they have to run away or abandon their dreams. There’s no need to do that. We get to live our dreams today. And I hope everybody can feel that.

Ron and Laura Take Back America premieres March 18–24 in Los Angeles and March 25–31 in New York. For more details and info on future viewings and on-demand releases, click here.