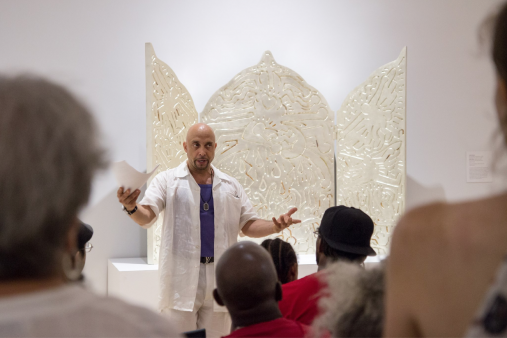 On July 22, 2016, Visual AIDS presented BRONX STORIES, an evening of storytelling, poetry and music inspired by The Bronx and the works of art on view in the Art AIDS America exhibition at the Bronx Museum of the Arts. Below, Visual AIDS Artist Member Orlando Ferrand revisits his reading for the program and chronicles his public presentation and communal mass for Keith Haring during Bronx Stories.

Spirituality does not come easy for gay men. In fact, when you consider the hateful and sinful-driven beliefs professed by the most influential forms of organized religion such as Islam, Orthodox Judaism and Christian Fundamentalism regarding the LGBTQ community at large, spirituality is lost and God becomes a murderer.

The AIDS pandemic came about in America during the Ronald Reagan administration, and silence about the spread of the epidemic and its consequences, paired with the rise of the right wing, struck the nation hard throughout the ‘80s. Concealment, not only about the disease but also about being a homosexual, cast a dark veil over the LGBTQ community due to social stigma and the political inadequacy of Republican government officials. As the pandemic continued to spread throughout all communities and sectors of the population whether gay or straight, and people regardless of creed, sect, religion, or lack thereof were dying by the numbers, resistance overpowered silence.

Resistance can never be contained when social injustice becomes the norm of a society and the thermometer for measuring the well-being of its denizens. As early as 1981, with the publication of factual information about a rare lung infection, Pneumocystis carinii pneumonia (PCP), in five young, previously healthy, gay men in Los Angeles[1] to the “KS Poster Boy”[2], resistance in the form of dissemination of information, disclosure, and survival strategies started to create a ripple effect of hope through social action networks (GMHC, ACT UP, Housing Works and Visual AIDS, among others) that would counteract in subsequent years those maladies generated by ignorance—namely discrimination, the shame associated with stigma, and the increase in the death tally of our nation.

Perhaps because I am an artist, I consider that the best form of resistance to social injustice of any kind in any society is through the arts. Art leaves us with the permanent imprint that characterizes the psychological, emotional, and spiritual landscape of humankind at any given point in time. This kind of resistance becomes a form of spiritual communion in and of itself because it transcends the mundane by elevating our shared pain and grief into an object of desire—the work of art itself.

Art AIDS America, in my opinion, is the epitome of mainstream AIDS-related arts in the US.

"Art AIDS America is the first exhibition to examine the deep and ongoing influence of the AIDS crisis on American art and culture. The exhibition features more than 125 works in a wide range of media dating from 1981 to the present day, by artists including Félix González-Torres, Derek Jackson, Kia Labeija, Annie Leibovitz, Robert Mapplethorpe, and Martin Wong. The exhibition, on view from July 13 through October 23, 2016, is organized by the Tacoma Art Museum in partnership with The Bronx Museum of the Arts.

For this presentation, additional works from The Bronx Museum permanent collection will broaden the offering of artistic responses to the AIDS crisis by artists particularly connected to the Bronx, such as Willie Cole, Glenn Ligon, Whitfield Lovell, and others. The Museum is also working with Visual AIDS—a New York-based organization that supports HIV+ artists and uses art to fight the disease—to create a vitrine that features work from the organization, including works on paper by artist Glenn Ligon."[3]

Even though my hero, Keith Haring, is not mentioned in the press release issued by The Bronx Museum of the Arts as a featured artist in the exhibit, the Keith Haring Foundation is credited in the press release as a supporter of the Education and Community Engagement Program, and the artist’s last work, Altar Piece (1990, cast 1996), is centrally placed towards the entrance to the exhibition. And that’s a great thing!

Since life without stories to provide sustenance is not a life worth living, when I was invited by Alex Fialho, Program Director at Visual AIDS, and Lauren Click, Director of Community and Public Programs at The Bronx Museum of the Arts, to create a narrative in any form I wanted for Bronx Stories, I literally moved to the museum for over a week to weep, to feel, in essence to let it all in as I visited the ghosts from my past, and wrote on-site. This special Bronx Stories show would be an evening of storytelling, poetry and music inspired by The Bronx and the works of art on view in the Art AIDS America exhibition.[4]

On July 22nd I joined presenters Wanda Hernandez-Parks, a fierce AIDS activist whom I befriended in the march from New York City to Washington, DC in 2008 during the Campaign to End AIDS; Charlie Vazquez, Director of the Bronx Writers Center who is a dear friend and colleague with a serious background in Queer literature and literary arts community programming; and our host Simply Rob, a provocative spoken word artist and stallion from the Boogie Down, whom I’ve always had a crush on.

There’s something to be said about AIDS in America: Infected or not, we’ve all been scarred by the HIV virus. And I am very moved when I get to see, hug and cherish those of us who are still here to tell our stories.

When I came in contact with Keith Haring’s last piece, Altar Piece, a sculpture, I understood on a deeper level why carving is essentially different than drawing or painting. Because I sculpt, I know that there’s something desperately permanent about carving, something primeval and glorious that transcends all other forms of visual expression. It is a permanent mark, and so is our relationship with a living, merciful and caring God—we hope.

I believe that Keith Haring was redeemed through his work, by making it accessible to everyone, elevating fine arts to a greater universal and participatory experience, and ultimately by creating his outstanding foundation that continues to service children and families living with HIV and AIDS all around the world.

He also became a redeemer in his own right. It’s noteworthy to me that when he was dying, I was starting to experience New York Life in the fast lane. I was in my late teens and the same year he passed, 1990, I also experienced my first loss to AIDS when I buried the love of my life, Angel, in the Bronx. He was 33 years old and was the same age as Christ when He was killed.

Angel and Keith lived parallel lives. The former was a sensitive man who introduced me to the emancipating creations of the latter. I am forever grateful to both Angel and Keith.

Special thanks to Robert F. Cohen for his editorial input.