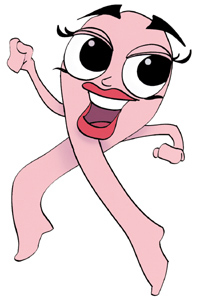 I recently read an article in Glamour magazine that highlighted the paranoia some young women harbor about developing breast cancer. Dina Roth Port, the article’s author, said her often paralyzing fear led her to insist her doctor prescribe her a mammogram in her early 30s although the recommended age to begin yearly exams is 40.

Port maintained she wasn’t alone in her obsession--a viewpoint backed up by a Glamour poll that found 82 percent of women said they’re afraid of getting breast cancer at some point in their lives.

This staggering statistic made me wonder: why do some young women spend so much time fixated on breast cancer, which will most likely not affect them until they are much older? Conversely, why do they have such little concern for other health issues that are far more likely to inflict them, like HIV? As a young woman myself, I know no other woman my age who has forced (or even asked) her doctor to give her an HIV test.

Women torment over the infamous fact that 12.2 percent of us will develop breast cancer at some point in our lives, yet, most of that percentage will not receive their diagnosis until after becoming octogenarians. In contrast, HIV is becoming more widespread among adolescents and young adults. Every year 30 percent of all new diagnoses in the United States are among people under the age of 29. While HIV begins to inflict a younger population, the same is not true for breast cancer. Rates of breast cancer among this demographic have remained constant for 25 years.

Ironically, the development of breast cancer remains indefinable before onset and basically unpreventable, while on the other hand HIV, which in recent years has morphed from a death sentence to more of a chronic and manageable disease, is avoidable. Women (and men) disregard the multitude of available prevention measures for defending themselves against HIV, and often possess a blasé attitude towards safe sex.

Unlike Port’s anecdote demanding her doctor to address her concern over a nonexistent lump in her breast, we rarely hear about the women who run to their doctor’s offices to get tested for a sexually transmitted infection (STI) the morning after they have unprotected sex or a condom breaks in the midst of wild passion.

I remember when a friend was dumped from a long-term monogamous relationship and out of retaliation she had multiple sexual partners while inebriated. During our morning-after phone calls she would brush off her lack of condom use, explaining that she continued to take her birth control pills.

Throughout these conversations she also panicked about a strange new allergy she had developed. After a single mild outbreak, she immediately made an appointment with her doctor to discover the source. Yet after months of my dropping hints about getting tested for HIV and other STIs, she had yet to follow my advice.

Even after my expressions of distress, she only started worrying about her unsafe sex practices when her gynecologist suggested HIV and STI testing. Fortunately for her, the end result was negative. She quickly went back to her old ways, in essence, tossing an implied “I told you so” my way.

Why do young women spend so much time preoccupied with a one-in-a-million chance of developing a far-fetched allergy or worry about dying young when the likelihood is so remote? If women in general have these fears, then why don’t young women in particular fear HIV? And the most irksome of all: Why does breast cancer get an entire month and HIV/AIDS gets only one day?

October is Breast Cancer Awareness Month and support of the cause is everywhere: Ralph Lauren’s pink ponies, the Empire State Building set aglow in blinding magenta, football uniforms, Facebook statuses, purses, pillows, push-up bras, the list goes on and on.

I propose in honor of Breast Cancer Awareness Month to wear red instead. Honestly, it’s a much more flattering color, makes the eyes pop. When your friends tell you that you’re wearing the wrong color, you can educate them on the AIDS epidemic and try to convince them to get an HIV test.