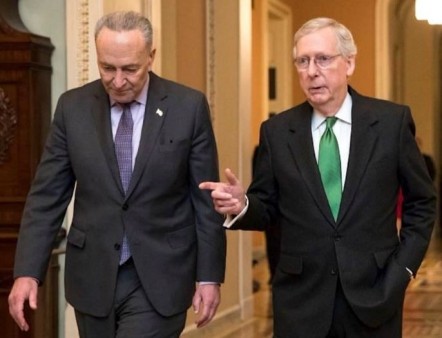 After the briefest—and most unnecessary—government shutdown in U.S. history, Congress passed a 2-year budget deal Friday morning, February 9, to lift spending caps for defense and urgent domestic priorities, provide much-needed funding for disaster relief and community health centers, and keep the federal government open for another 6 weeks while appropriators in Congress continue work on a long-term spending bill.

Both houses of Congress approved the budget deal early this morning, ending a five-hour government shutdown that was caused almost entirely by Senator Rand Paul (R-KY), who exploited an arcane Senate rule to make a statement about government spending. Ultimately, all Paul’s gambit did was keep members of Congress & their staffs in the Capitol for an all-nighter as the Senate voted 71 to 28 to approve the budget deal, with the House following suit with a much closer vote of 240 to 186.

The budget deal will lift spending caps by roughly $300 billion over the next two years, with $131 billion of that reserved for domestic programs. Many issues that have been championed by HIV advocates over the past several months were addressed in the deal, which included nearly $90 billion for disaster relief ($4.8 billion of which is set aside for funding Puerto Rico’s Medicaid program for 2 years), $6 billion to address the opioid crisis, a four-year extension of the Children’s Health Insurance Program and more than $7 billion in funding and a 2-year authorization for community health centers.

However, all of this non-discretionary spending was not enough to win over the votes of the lion’s share of House Democrats, including House Minority Leader Nancy Pelosi (D-CA), who voted against the budget deal due to House Speaker Paul Ryan’s refusal to mirror his Senate counterpart’s guarantee to bring DACA legislation to the floor if the bill passed. Minority Leader Pelosi, who gave a record-breaking 8-hour speech in support of the rights of Dreamers on the House floor on Wednesday, publicly opposed the budget deal, but did not go so far as to whip her caucus to vote with her. In the end, only 73 of the 193 Democrats in the House voted for the budget deal.

Moving forward, AIDS United will continue fighting for the protection of Dreamers and any other undocumented immigrants living with or affected by HIV. This virus does not differentiate based on immigration status or nation of origin and ending the HIV epidemic in America is only possible if we offer prevention and treatment services to everyone who lives in America, regardless of citizenship. AIDS United will also work to ensure that non-defense discretionary programs serving people living with or impacted by HIV—programs that have been scraping by on flat funding for far too long— receive their fair share of the $131 billion in this budget deal.