Donna Summer’s Letter to ACT UP

Donna Summer’s Letter to ACT UP

When the news hit that Donna Summer had died, I was reminded of her little-known scrape with ACT UP, the AIDS activist group I joined shortly after its first demonstration in 1987. As many will recall, even though her music was hugely popular with the gay community, she faced an ongoing backlash after the Village Voice attributed some quotes to her from a concert in 1983, saying she slammed gays and claimed AIDS was a punishment from God.

As some in the community continued to embrace her, others grew angrier at her hedged denials (words like “misunderstanding” were used), and the issue continued to percolate (see this transcribed 1985 story from The Advocate).

By 1989, various ACT UP chapters started protesting at Donna Summer appearances, including this Boston Gay Pride event, as reported by Gabriel Rotello in Outweek Magazine (July 3,1989): 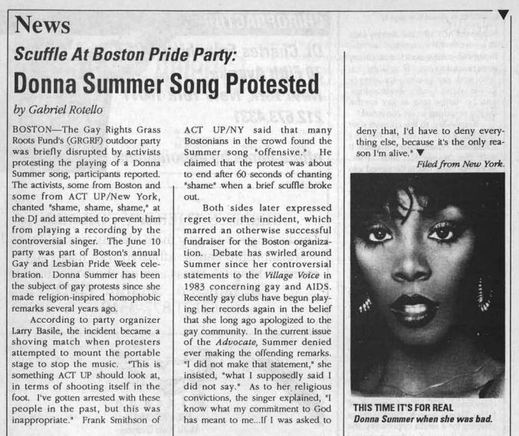 To everyone’s surprise, Donna Summer wrote a letter to ACT UP New York attempting to mend the divide. A few quotes from the letter were reported at the time, and appeared often in recent online obituaries, but the letter itself has never been seen publicly.

So I asked Jay Blotcher, who was ACT UP’s media coordinator at the time, if he still had a copy. He said he had kept it, but it was now with his ACT UP archives which he donated to the New York LGBT Community Center. After a few phone calls and emails, the Center pulled Jay’s archives out of storage, and sent me a scan of the two-page letter.

I don’t think ACT UP kept up their demonstrations after she sent it, but that probably had more to do with our priorities at the time, rather than this strange letter. Note to PR agents: when you apologize to the gays, it’s probably not best to quote at length from the bible (even though it’s a lovely quote).

So here it is, and I’ve transcribed it below the scanned images... 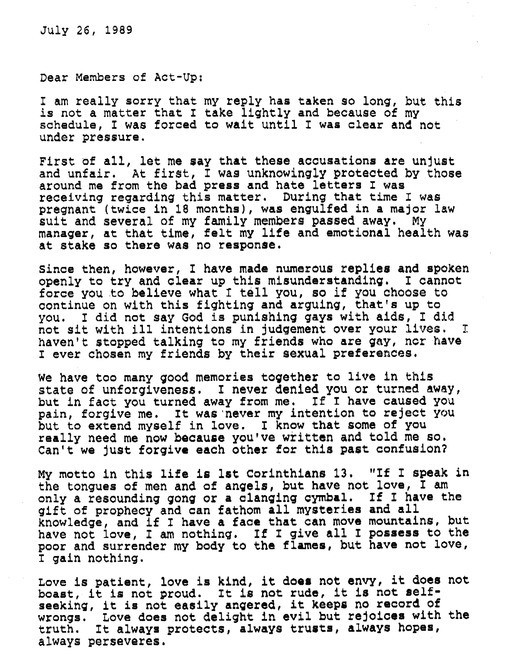 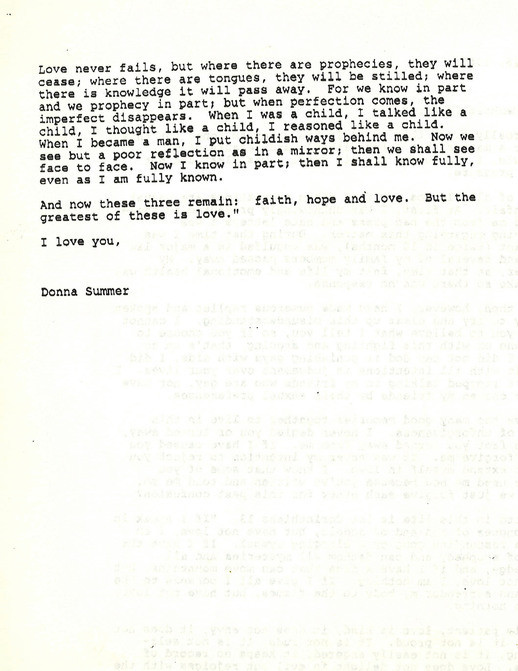