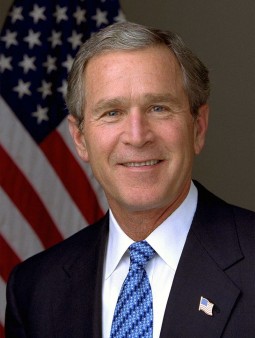 But if lawmakers take the former president’s suggestions, would the global AIDS program deserve full support?

In an April 7 op-ed for the The Washington Post, George W. Bush asks Congress to continue full funding for the United States President’s Emergency Plan for AIDS Relief (PEPFAR), the global program launched in 2003 under his presidency and one of his lasting achievements.

“I argue that we shouldn’t spend on programs that don’t work, whether at home or abroad,” Bush writes. “But they should fully fund programs that have proven to be efficient, effective and results-oriented.”

He adds: “Saving nearly 12 million lives is proof that PEPFAR works, and I urge our government to fully fund it.”

The piece from Bush comes two weeks after the Trump administration revealed its 2017 budget proposal, which included cutting PEPFAR funds by $300 million. The news came as a surprise because the White House had previously announced it would maintain its commitment to the initiative.

Although the program has made an immense impact and received bipartisan support,, it is not without its critics.

As our POZ feature story “World of Difference” points out, questions have been raised about taxpayer money going to faith-based groups that work abroad to combat HIV in Africa, especially ones that push abstinence-only education, misinform women about reproductive health, foster anti-condom messaging and promote antigay groups.

One example from the article is the Children’s AIDS Fund International, which receives “tens of millions in PEPFAR funding and still gets taxpayer dollars today.”

Then there’s this POZ headline from last year: “The U.S. Has Likely Wasted $1.4 Billion Pushing Abstinence in Africa.”

Despite these problems, AIDS advocates urge lawmakers and the Trump administration to preserve PEPFAR funding. Organizations such as The Elizabeth Taylor AIDS Foundation and the Elton John AIDS Foundation have also demanded its continued funding.

It’s not that we disagree. As Bush writes in the op-ed: “We are on the verge of an AIDS-free generation, but the people of Africa still need our help.… The American people deserve credit for this tremendous success and should keep going until the job is done.”

But perhaps Congress and PEFPAR administrators need to follow Bush’s advice more closely than he intended. PEPFAR isn’t an all-or-nothing proposition. If specific aspects of the program are not working, then why not allocate those funds to areas that do work? As Bush himself claims: We should “fully fund programs that have proven to be efficient, effective and results-oriented.”