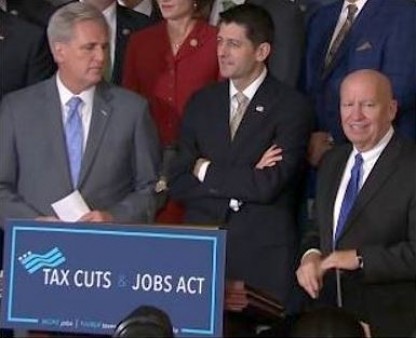 Here’s how you can oppose bills that cut spending to health care and safety nets.

On Thursday afternoon, November 16, Congressional Republicans took their largest and most concrete step toward the biggest revamping of the U.S. tax code in more than three decades as the House of Representatives passed its tax overhaul bill by a vote of 227 to 205. The vote on the “Tax Cuts & Jobs Act” (H.R. 1) was largely taken on party lines with 13 Republicans—almost all of them from New York, New Jersey and California who opposed the bill’s elimination of the State and Local Tax deduction—joining all House Democrats in voting against the legislation.

The House tax bill will cost a total of least $1.5 trillion in annual deficits over 10 years, adding significantly to the total national deficit and reversing the hawkish stance on deficit spending that the GOP routinely took when President Obama was in office. The distribution of the tax cuts provided by the House tax plan is dramatically skewed toward high-income households, with nearly 40 percent of the bill’s tax savings being distributed to families with annual incomes over $1 million who represent just 3 in every 1,000 American households.

Overall, under the House tax plan, American households making more than $1 million would see a 3.2 percent increase in after-tax income, while households making between $10,000 and $50,000 would see virtually no income increases. Some income groups, including many middle-income and working class households, could even see their taxes increase over the next 10 years.

In addition to redistributing hundreds of billions of dollars to the richest Americans, the deficit increases caused by the House tax plan will likely lead to Congressional Republicans enacting massive cuts to Medicaid, Medicare, other safety-net entitlement programs, other health care programs, and to non-defense discretionary programs, which could include domestic HIV programs. According to the budget resolution adopted by Congress in October, the GOP is calling for a staggering $5.8 trillion in program cuts over the next 10 years, including $1.8 trillion in cuts for “Medicaid, Medicare & other health care programs” as well as a further $800 billion in cuts to non-defense discretionary spending.

Things are not much better in the other house of Congress, where the Senate Finance Committee completed the mark up of its tax plan late on Thursday. Like its House counterpart, the Senate Finance Committee’s tax cut plan would cost a total of least $1.4 trillion in annual deficits over 10 years, adding to the total national deficit and leading to massive spending cuts. However, unlike the House-passed bill, the Senate plan includes a repeal of the ACA’s individual mandate.

According to the Congressional Budget Office, repealing the individual mandate would save $338 billion over 10 years, but result in 13 million people losing health coverage over the same time period, with 4 million of those losing health coverage in the first year. In addition to ripping health care away from 13 million people, the repeal of the individual mandate included in the Senate Finance Committee’s tax plan would increase the cost of health insurance premiums by 10 percent every year beyond what they would normally increase.

AIDS United opposes any tax code overhaul bill that would result in spending cuts to health care and safety net programs, including cuts to or significant restructuring of entitlement programs. We are concerned that deep spending cuts or entitlement restructuring inevitably will affect people at risk for or living with HIV and its co-morbidities, resulting in a lack of services or reduced access to essential medications.

Additionally, AIDS United does not support using a tax code bill as a vehicle for eliminating the Affordable Care Act’s individual mandate, reducing services affecting women’s reproductive health, including the right to safe, legal abortions, eliminating the personal medical deduction and/or charitable deductions, and getting rid of tax law provisions that help to finance the development of health care facilities or the development of low-income housing.

AIDS United is joining many national health care and social justice organizations in urging all Senators to vote no on the tax cut bill. Contact your elected officials in Congress and tell them that oppose any tax bill that harms health coverage or safety net programs.