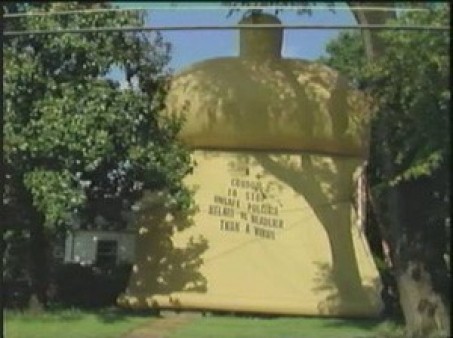 In Memory of Jesse Helms, and The Condom On His House [VIDEOS]

Why? Because, as the condom said, “Helms is deadlier than a virus.” Senator Jesse Helms was one of the chief architects of AIDS-related stigma in the U.S. He fought against any federal spending on HIV research, treatment or prevention. He once said, referring to homosexuals, “it’s their deliberate, disgusting, revolting conduct that is responsible for the disease.” Here’s another choice one: “There is not one single case of AIDS in this country that cannot be traced in origin to sodomy.”

By saying words like this on the floor of the Senate, Helms gave a veil of legitimacy to every parent who threw their HIV positive kid out of the house. ACT UP New York was filled with angry young men who experienced this kind of Helms-related hatred.

He proposed and passed laws that are still on the books, enshrining this stigma as official government policy. People with HIV couldn’t travel to the U.S. The CDC was not permitted to spend money on preventing the spread of HIV among gay men. Our country never launched a single well-funded HIV prevention campaign because of Jesse Helms. To this day, fifty thousand Americans become infected each year in no small part due to “Senator No”.

In the summer of 1991, it was bugging me that gay and AIDS activists had largely left him alone. Sure, there were thousands of angry words said and written excoriating the man for his hate-filled agenda, but no one got up-close-and-personal with a response. We needed to send a proverbial shot across his bow.

One of the best tools an activist can use is humor. If you can get folks laughing at your target’s expense, you diminish his power. I wanted the country to have a good laugh at Helms’ expense. I wanted his fellow senators to have a little chuckle behind his back. And I wanted Senator Helms to realize that his free ride was up - if he hit us again, we’d hit back.

Fortuitously, I had recently met Twilly Cannon, one of the leading activists in Greenpeace - the guy that trained their new recruits in how to accomplish challenging actions like hanging banners from bridges. I told him about my idea for a house-size condom - could we cover Helms’ house in less than five minutes so the cops couldn’t arrive and stop us? Twilly, ever the optimist, said “no problem.”

Step one: find his address. One of the many great things about being gay is that we have access to one of the largest spy networks in the world. There isn’t a single organization, company, or government agency anywhere that doesn’t have a gay spy willing to share intelligence with their compatriots in the gay underground for the greater good. So I just picked up the phone and called one of our spies in the Hart Senate Office Building. Helms’ DC area home was in Arlington, Virginia, on South Glebe Road.

Address in hand, Twilly and I took a road trip to Arlington, and snapped a picture of Helms’ simple two-story brick colonial house. Twilly showed me how you could estimate all the measurements of a house by starting with the door. Since most front doors come in a standard size - 80 inches high - we took a ruler to the picture, and did some math.

We didn’t need to cover the entire house, just enough of it so that it looked completely covered from the street (where the TV cameras would be). It was a small rectangular house with a steep, salt box roof. We needed a huge inflatable section for the front side of the roof which would tower above the house once inflated, including a reservoir nipple. A long sheet of the same material would lead from the bottom of this “balloon” to the ground, ending in a second inflatable section shaped like a tube (for the unrolled bottom of our condom).

I faxed the specs off to three companies in California that specialized in custom-made inflatables, like the big gorillas in front of car dealerships, telling them that we wanted to cover a house on Long Island that was hosting an AIDS benefit. They sent bids ranging from $3,500 to $15,000.

This was going to be the first action by the newly formed ACT UP affinity group called Treatment Action Guerrillas (which split off from ACT UP a few months later and renamed itself TAG, the Treatment Action Group). We didn’t have any money yet, but I stumbled on a donor I kept anonymous for many years. My boyfriend at the time, Kevin Sessums, was good friends with David Geffen. We were on Fire Island Pines that August, and Kevin told David about by plans. David walked up to me on the beach one morning, and handed me a thick wad of cash - $3,000. Problem solved. 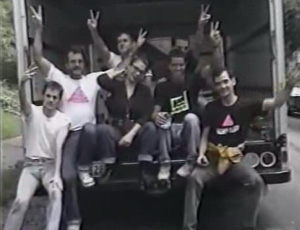 I started to recruit our team of activists, the TAG Helms Seven: myself, POZ Magazine founder Sean Strub, Garance Franke-Ruta, Mark Allen (who blogged about it here), Derek Link, Jim Serafini, and Jason Childers. An eighth activist, Dan Baker, agreed to be our coat-and-tie-wearing media spokesperson.

The condom arrived, and we took it up to ACT UP treasurer Marvin Shulman’s country home outside New Paltz so that we could practice blowing it up. His house wasn’t at all shaped like Helms’, but we could use his well-hidden backyard to see how long it took to inflate. Once back in New York, Garance stencil-painted the front of the condom in big block letters, saying “A CONDOM TO STOP UNSAFE POLITICS. HELMS IS DEADLIER THAN A VIRUS.”

We made sure the house was empty. The last thing we wanted was to spend our lives in jail for giving a senator a heart attack. We knew he was on the last week of his summer recess, and probably in North Carolina. We even rang his doorbell the night before to make sure no one was home.

CNN and all the local TV stations were contacted in advance, and only told we’d be putting a condom on a politician’s house. They were to meet us at our Arlington motel early that morning, and follow our rented U-Haul truck.

Besides opening the rented ladder in the motel parking lot, we never did an actual walk-through as practice. But we talked it through at length, and everyone had their specific tasks and equipment to manage, including a heavy portable generator, a long extension cord, two ladders, rubber mallets, plastic stakes, one of those early clunky cell phones, a small cold-air blower for the ground, and a large blower with a custom-built stand for the roof.

Sean Strub and I were the roof guys. The condom was made of parachute material, so when carefully rolled up, it fit into a large duffle bag, which I pulled and he pushed up the 28 foot extension ladder. We unfurled it on the roof, connected it to the blower, and prayed the cops took at least five minutes to get there.

As it began to rise, all the guy wires were quickly staked into the lawn on our four sides of the house, while Mark and others used the other ladder to guide the front section past electrical wires and the front door awning.

The first cop car arrived just as the reservoir nipple was beginning to rise, a little over seven minutes after we had arrived. We had done it!

A crazy neighbor started yelling at us. One of the TV crews filmed her complaining to the police, saying “You guys don’t want to tangle with these people because you don’t want to get AIDS, I know.” I heard just yesterday that someone watching the video below recognized her. She’s supposedly Becky Norton Dunlop, and was the wife of Helms’ administrative assistant (see her Heritage Foundation bio).

I actually saw one of the cops chuckling when he got out of his car. They didn’t know what to do at first. Shoot the thing? They spent quite a while radioing their superiors, and eventually asked us for our driver’s licenses, wrote down our addresses, and told us it was up to the senator to press charges or not. After the press got all the pictures they needed, I asked the cops if they wanted us to take down the condom, and they let us back on the property to reverse the whole process.

All we got was a parking ticket for parking the truck in the wrong direction. We were free to go, and could take the condom with us. It’s now in Los Angeles at the ONE National Gay & Lesbian Archives.

That night, local TV stations around the country played short funny clips of the action. Senator Helms complained about it on the floor of the Senate a week later, calling us “radical homosexuals.”

He never proposed or passed another life-threatening AIDS amendment.

Robert Hilferty, an ex-boyfriend of mine, filmed the action, some of the planning, and a few interviews, and created a wonderful short documentary called TAG Helms. I also uncovered some raw footage from one of the TV stations, and it shows the action from beginning to end.

In loving memory of this special moment in AIDS activism, I’m posting both here for your viewing pleasure.