Joan Rivers Ruled the Red Carpet and the Red Ribbon

As you look back on the comedian’s outrageous remarks, don’t forget about her courageous work for HIV/AIDS causes.

Can we talk? Joan Rivers was loved and loathed for her mean-spirited humor. But her crass jokes often overshadowed her charity work for HIV/AIDS. Just turn to page 13 of our recent July/August issue and you’ll find her. She’s wearing a hairnet and apron because, as the write-up explains, she was helping “prepare the 15th million meal for God’s Love We Deliver, which provides much-needed meals for New Yorkers living with severe illnesses, including HIV/AIDS.” (Read our POZ web exclusive on the event here.)

Rivers, who died on Thursday, September 4, at age 81, was as comfortable working for HIV causes as she was working the red carpet. A 20-year board member of God’s Love We Deliver and an even longer time supporter, she famously won $250,000 for that charity when she won Celebrity Apprentice in 2009.

In the early years of the epidemic, she was one of the first celebrities to headline in AIDS fundraisers. This was during the height of the AIDS panic, when fear and misinformation ruled the day and the virus was synonymous with homosexuality. Joan didn’t care. She was fearless, she was smart, she was a gay icon.

While researching our September POZ Planet item on Mighty Real: A Fabulous Sylvester Musical (about the disco legend Sylvester), we came across this amazing YouTube clip of Sylvester on The Tonight Show, circa 1987, when Rivers was hosting. The two of them, along with Charles Nelson Reilly, reminisce about their early AIDS fundraisers and even chat about gay marriage. Can we talk--about trailblazers?

Rivers’s AIDS advocacy is also covered over at Joe.My.God., with this amazing photo and post: 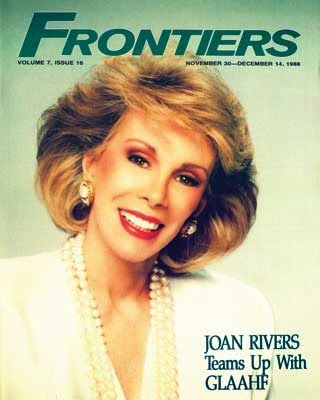 From Karen Ocamb at Frontiers Magazine: “Joan Rivers was not only pro-gay - she was out in front raising money for people with AIDS very early on - when many were still terrified of the disease. She was featured on the cover of Frontiers Magazine promoting an AIDS fundraiser at Studio One in March 1984 that raised $45,000 for APLA, L.A. Shanti and Aid for AIDS.”

While most folks will be remembering the comedian for her recent antics on Fashion Police and reality TV, let’s not forget that under all the bitchiness and Botox, there beat the generous heart of a true ally for the HIV community.

We miss her so much already.