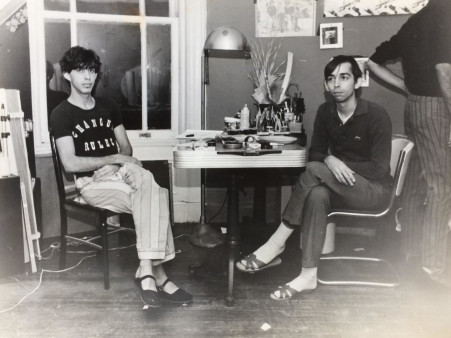 Louie Ortiz-Fonseca compiles a series of images by Visual AIDS artists members who invite us into a memory or moment.

The first time I heard the quote “every time an old person dies, it is as if a library burned down,” I immediately thought of my mother and brother Nicholas. The two people in the universe that were the first half of my life, that many of my memories orbit around. Neither one of them were anywhere near what is considered “old” in this country when they both died. My brother was just 21 when he was murdered 20 years ago and my mother, 55, when she chose to end her battle with cancer six years ago. Together, with their support, I survived the height of the AIDS epidemic. And only because of them, I survived the crack epidemic. And part of my survival is my responsibility to tell our stories with the urgency of being “a library on fire.”

A lot of what I remember exists only in my head in memories. We didn’t have cameras growing up. That luxury was regulated to the very rare occasions when we purchased a disposable camera from Rite Aid. The notion of documenting our collective history through photographs had never occurred to me then. Whenever we did have access to a camera, we’d take random photos of us around the house or up the block. We would pose in our outfits of the day or took turns catching each other off guard until we reached the last click in the camera. Because many of those rolls of film were never developed and/or left exposed somewhere in that one kitchen drawer where we placed discarded mail and overdue utility bills, I have very few photos of my mother, brother and myself during that era of our lives. I now fight to remember with an urgency as a library on fire.

A few years ago, I posted a photograph on Instagram of my brother Nicholas during the historic winter blizzard of March 1996 (see image below) that left Philadelphia buried under 27 inches of snow. In the photo, my brother was standing on the corner with piles of snow behind him. Many of the comments left by friends were their memories of that storm and how there was a shortage of storm essentials—bread, milk and eggs—because the massive amount of snow made store deliveries impossible in the following days. It was in our collective story sharing moments—conjured up by this one photo—that I was able to remember other subtle details about that particular day. Details that were locked away and could have most certainly remained unremembered had it not been for the collective storytelling in the comments section. 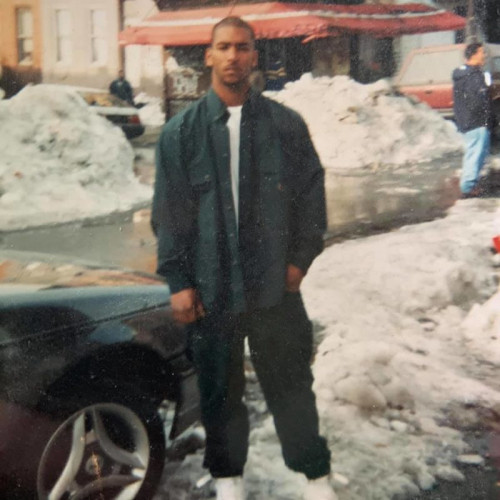 Photos not only help to recall and remember, but they serve as a kind of proof that we exist. Photographs invite us to reconnect with parts of ourselves and our community that can potentially fill the empty spaces that we may not remember. In this web gallery, I compiled a series of portrait and candid photography by artists members who invite us into a memory or moment intimately shared by photographer and subject but emotionally felt by patrons who enter this library of stories. Photos that communicate isolation, loss, joy, sadness, love and quiet resistance. 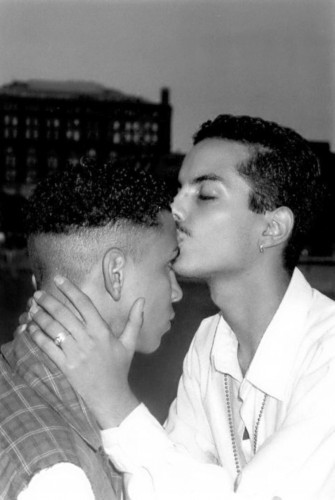 The gallery begins with Luna Luis Ortiz’s “The Kiss of Carlos and Harlow.” Taken in 1992, during the one of the many heights of the AIDS epidemic, the photo summons all of the Black and Brown gay boys who found love and remained tender without each other even as we watched libraries burn all around us. The gallery ends with “Selfie Room” by Eric Tenorio. Covid-19 has created, at least for me, a world of isolation that is voyeuristic. I know that I am not the only one who is struggling with loneliness in these times because I feel it in the very air that we were not supposed to breathe, but we continue on with our day with an urgency that we are all libraries on fire. 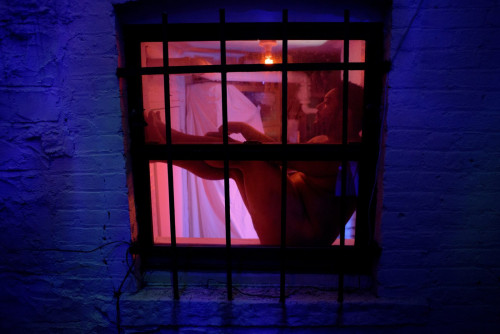 It is my hope that this gallery serves as a reminder that when we remember and retell our stories, both individually and collectively, we are building temples in which these stories will live forever. May we do it now and continuously as if we are all libraries burning.

Louie A. Ortiz-Fonseca is an Afro-Boricua queer HIV positive creative born and raised in Philadelphia, PA. He is the creator of Gran Varones, a digital project that highlights LGBTQ pop culture history and community storytelling through a Black/Latinx lens. He also works in partnership with young people living with HIV to combat stigma, and hosts a YouTube series for LGBTQ youth, Kikis with Louie. Louie is a father of a 17 year-old son and worships the Patron St. Mariah Carey.

Click here to read our profile of Louie Ortiz-Fonseca.