Lift the Ban on Blood

In 1985 the matching wrist/headband combo was quietly banned in clubs around the United States.  That same year, the government banned gay people from donating blood because of fears surrounding HIV infection.  I’m all for keeping blood supplies safe and bountiful- that’s why I support lifting this ban. 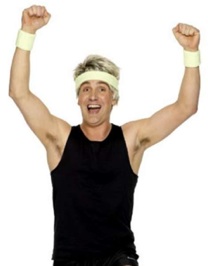 Screening and collecting procedures have improved vastly since 1985.  Plus, it is my understanding that one has to fill out a questionnaire to donate blood.  Sexual activity should be assessed not on a sexual orientation level, but on a risk assessment level.  Most people lie about their sexual history, anyway: so why would someone who wants to donate blood act differently?

And unless it’s Heidi Montag and her Swine Flu Patient Zero, Spencer Pratt, punishing someone based solely on who they are attracted to sexually is wrong.

I won’t be able to donate blood in my lifetime, but as someone with hemophilia I will rely on blood products for the rest of my life.  If I am cured of HIV and hemophilia some day- cool- I’ll donate blood.  Not being able to do so today, however, makes perfect sense.

If you agree with me about this ban, I say we show our objection in a way that cannot be ignored: with matching head and wristbands.